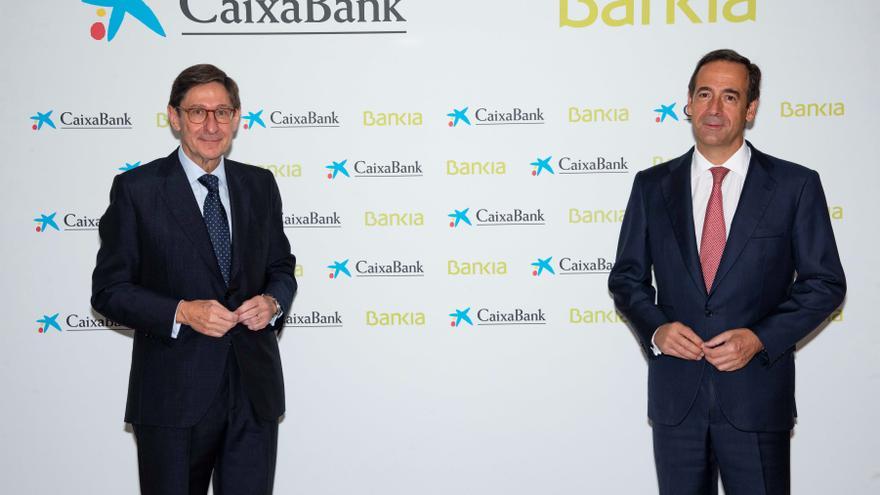 One of the main topics of the press conference explaining the merger –in fact absorption– of CaixaBank and Bankia was the participation of the Fund for Orderly Bank Restructuring (FROB) in its shareholding. The State had 60% of the shares of the entity chaired by José Ignacio Goirigolzarri and will have 16% of the resulting bank. Both Goirigolzarri, who will be executive chairman of the new CaixaBank, and Gonzalo Gortázar, who will continue as CEO and chief executive, have agreed that in the short term the economic situation and the securities of the entities in the markets do not advise the exit of the FROB of capital. Especially when the 23,000 million injected into Bankia for its rescue in 2012. "With the European banking trading at the lowest level in its history, it does not seem to be the best time for the FROB to leave," explained Goirigolzarri.

Asked by journalists, Gortázar has seen no problem with the state being the entity's second largest shareholder and anticipates that there will be no government interference. "Bankia has not had any interference from the FROB, I do not see that that will change," he explained. The directors of the two entities that begin their official merger today in a process that will last until March have hinted that in the short term the privatization of these shares is not convenient for the public treasury.

Goirigolzarri is the one who has referred the most to this matter and has once again justified the bank rescue. "The banks were not saved, the depositors were saved. If the State had had to face the 100,000 euros per deposit established by law, 60,000 million would have had to be dedicated. In addition, the risk premium was very high. As a result of that investment, the financial system stabilized, "he explained. For the president of Bankia, "regardless of whether the recovery of public money is higher or lower, what was done was good." Goirigolzarri, who has hinted that it will be difficult to return the injected public capital, explained that the merger has allowed the State "to become part of a more profitable entity and Bankia is now worth 30% more." "What we want is to maximize the value of the privatization, which has a date that is December 31, 2021. And it is not a commitment with Brussels, but with a Spanish law," he argued, leaving the door open to the Government can extend the term of privatization.

Goirigolzarri has revealed that it was Bankia that proposed the merger with CaixaBanka to the FROB and has said that "it has not set conditions". "The FROB will detail its position in the general meeting and cannot set conditions because it does not intervene. It has been the management that has taken the initiative," he said. In this sense, the president of Bankia has ensured that during the process any other entity could propose an offer: "If that happens we will have to assess it because it is what the law establishes. In that sense, transparency and competitiveness are guaranteed" .

The two executives have asked for peace of mind because until "the end of the first quarter of 2021" the merger will not be completed. Goirigolzarri will be executive chairman and Gortázar the CEO and, in the words of Bankia's chairman, "will be" the one in charge of the merger. "" One of the very clear lessons I have learned from mergers is that the command line has to be very clear. Gonzalo has to direct. My functions as executive president will be the secretariat of the council, communication and auditing, "he explained.

Gonzalo Gortázar has not wanted to figure out the labor impact that the merger will have. A loss of between 6,000 and 9,000 jobs is estimated. "It is too early to fine-tune labor matters. In any merger there are overlaps, although we have always reached non-traumatic agreements. It is too early to speculate on the people affected and possible exits", stated the current CEO of CaixaBank.

Until the merger is completed, in "around six months", Bankia and Caixabank will continue to function as two banks and "will continue to compete in the market." The impact that the merger will have from the outset is Caixabank's agreements with insurers other than SegurCaixa Adeslas.