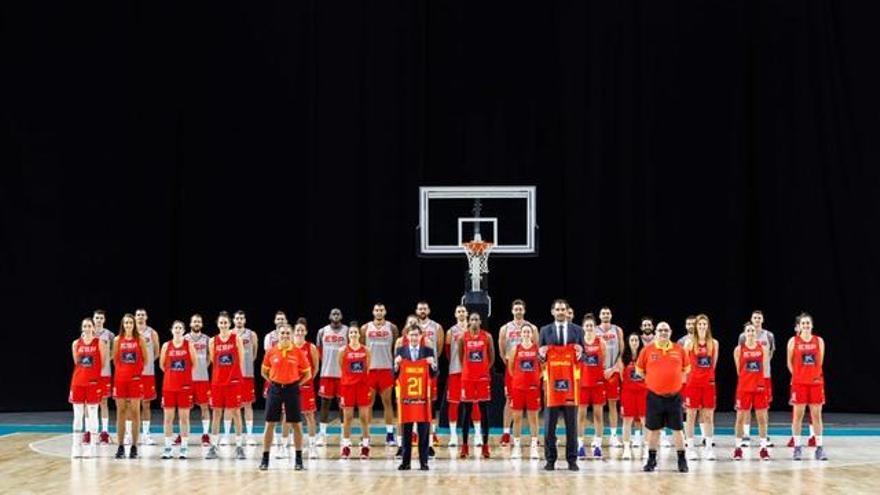 The presidents of CaixaBank, José Ignacio Goirigolzarri, and of the FEB, Jorge Garbajosa, They participated in a special farewell ceremony for the Women’s and Men’s Basketball National Teams before starting, in the next few hours, their journey to the Olympic Games with the aim of remaining among the best teams in the world.

The meeting, organized on the parquet WiZink Center in Madrid, has had the participation of executives from both entities, all members of the coaching staff of both teams, as well as the players summoned to date by Sergio Scariolo and Lucas Mondelo. This day, prior to the last training session in our country, has been the final point in the preparation of both teams before their trips prior to the Olympic Games. This Thursday, the Men’s National Team will head to Las Vegas, where it will play its last preparation match for the Tokyo 2020 Olympic Games on July 18. For its part, the Women’s Team will travel directly to the Japanese capital this Saturday.

José Ignacio Goirigolzarri and Jorge Garbajosa have chaired an event in which values ​​such as leadership, teamwork, trust, commitment, perseverance or effort, among others, that both groups embody.

The Chairman of CaixaBank, José Ignacio Goirigolzarri, highlighted that “at a time when society is constantly looking for references, these selections have always been an example thanks to the human group they have formed and who he puts all his talent, sacrifice and individual potential at the service of a common goal ”.

“You are an indisputable example of how to channel personal leadership for the benefit of the team” and wanted to recognize both national teams that “thanks to your perseverance, work, common effort and individual talent you have been able to surpass physically superior rivals throughout the last championships ”, has pointed out Goirigolzarri.

For his part, Jorge Garbajosa, president of the FEB, has highlighted “CaixaBank’s involvement with the Federation’s present and future strategic lines. There are symbols that are much more than symbols. That the president of CaixaBank wants to come to know what our men’s and women’s teams feel is invaluable both for the Federation and for all of us who make it up ”.

Within the framework of this event, the women’s national coach, Lucas Mondelo, has assessed the situation and explained that “The team is doing very well at the mental, work and activity level. In the preparation matches against France it was already possible to see that the style and attitude were very good. We are very hopeful to have a very good championship, to compete and, hopefully, to be able to go far ”.

“The preparation matches played so far have given us good feelings, although there is still a lot of work to be done to be able to be at a high level of competitiveness from the first match,” he said, Sergio Scariolo, men’s national coach.

The financial entity has been involved with national basketball since 2013 and its involvement and activation of multiple initiatives around this sport have helped to make visible and expand the impact of the greatest international successes.

In its implementation of the sponsorship strategy, CaixaBank has collaborated with the main basketball events that have been held in the last decade in Spain, both professionals and amateurs, transferring the values ​​of sport to all corners of the country.

Proof of this is the commitment as an official sponsor of the 2014 World Cup held in Spain, the activation of multiple initiatives coinciding with the FIBA windows disputed throughout the territory, the collaboration with the Women’s Basketball World Cup held in Tenerife in 2018, the women’s Eurobasket that takes place this year in Valencia or the historic commitment to the Plaza 3×3 CaixaBank circuit, the largest 3×3 basketball circuit on the street that has been held since 2012, one of the benchmark competitions of grassroots sport that has brought together more than 42,000 players of all ages and has received more than 200,000 visitors after visiting 39 Spanish cities throughout its story.

On the occasion of the 2014 Men’s World Cup held in Spain, the FEB and CaixaBank joined forces in order to promote a sports volunteering program that transcends the competition itself: the FEB CaixaBank volunteer program. Seven years later, the Spain Basketball program, with the support of CaixaBank, has managed to weave a solid community of almost 20,000 volunteers, that support all official basketball events organized by the FEB.