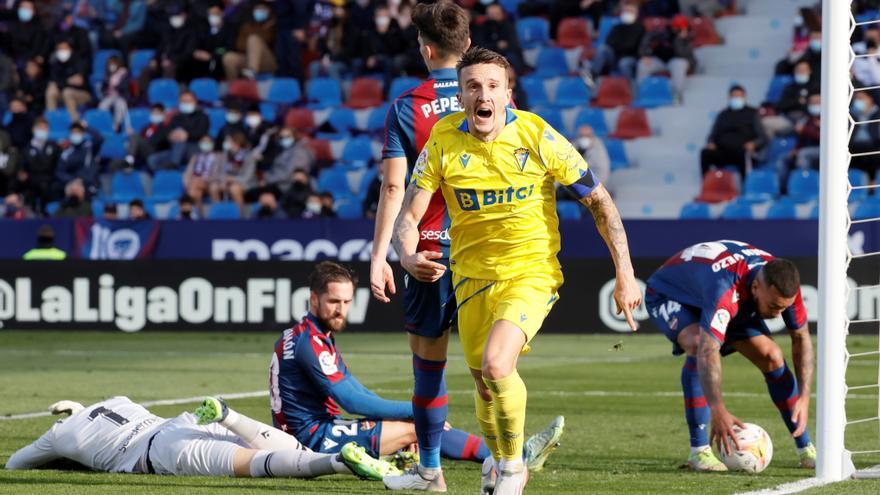 The last two classified in the table faced their emergencies in a match in which Levante, bottom team, started well, gave in to Cádiz at the end of the first half and their improvement in the second half he didn't give enough of himself to achieve not even a draw.

It was a match with few goal chances, very disputed and in which the team that was most reliable in front of goal took the points and the particular goal difference.

Despite the qualifying situation of both teams, the match started at a very good pace, especially by the local team, which, based on in-depth actions by both wings, approached the Cadiz team's goal with some danger.

The team of Sergio Gonzalez He tried to reply to the local and despite being dominated in some phases of the game, he did not go through dangerous situations.

Midway through the first period, Levante's performance dropped while Cádiz improved. He gained prominence and had more of the ball than at the beginning, although Aitor Fernández did not reach the goal.

When this tendency had consolidated, a penetration from the right by Lozano was magnificently headed by Negredo far from the reach of the local goal to make it 0-1 on the marker.

There were ten minutes left before the break in which Levante did not give the feeling of being able to level the match against a Cádiz that defended itself with great order and without fissures.

Despite the fact that the first half was even, the Andalusian team found a reward for the improvement it offered from the halfway point of this period, while Levante was punished after lowering its performance.

Little by little, the game turned towards a more intense local domination with a Cádiz with hardly any exit, although without clarity in front of goal, until a header from Vezo (m.67) forced Ledesma to work hard.

Levante began to press and Cádiz to suffer, but the goal was for the visitors in an action by the right that culminated Sánchez.

With the 0-2, the match was settled a quarter of an hour from the end, with tangana included in which the local coach, Alessio Lisci, was expelled.

Incidents: Match of the twenty-second day played at the Ciutat de Valencia.