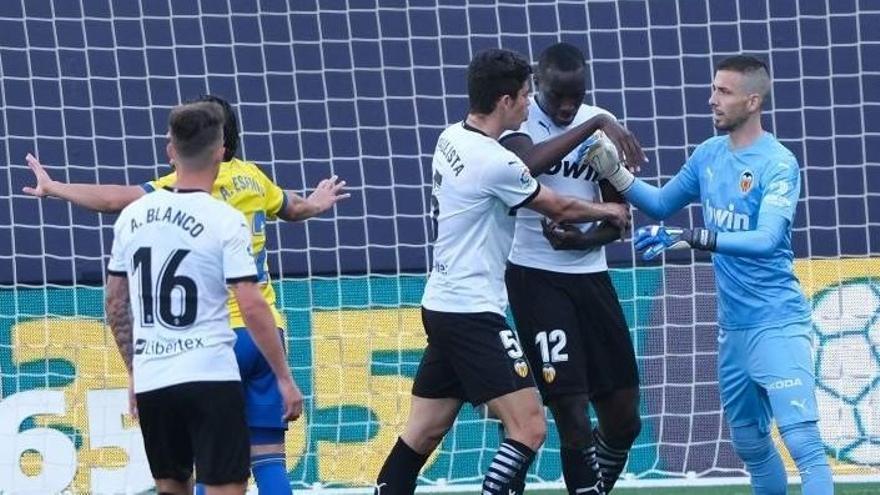 The Cádiz beat Valencia 2-1, with a goal at 88 minutes from the Argentine Marcos Mauro, in a party marked by the Valencian complaint that Mouctar Diakhaby received a racist insult from Juan Cala, which led to the withdrawal of the visitors from the field in the 32nd minute and their subsequent return 25 minutes later.

The interruption came after a row between the players in the wake of a discussion between the local Cala, who was later replaced at halftime precisely by Marcos Mauro, and Diakhaby, who, after the withdrawal of Valencia after half an hour, no longer returned to the field and Hugo Guillamón replaced him, although the Frenchman asked his teammates to do so.

Valencia has communicated through its social networks that the cause of the team’s withdrawal was racist insults made against Diakhaby, although Javi Gracia’s team, who is still in the middle of the table, later decided to return to the pitch of the Ramón de Carranza, where could not avoid a defeat against Cádiz, which is eight points above the decline.

Valencia was in command of the game and in the first minute they had their first chance in an outside shot by Danish Daniel Wass that Argentine Jeremías Conan Ledesma sent for a corner. It was the first of a succession of four corner kicks in a row thrown by the Valencians that the Cádiz rear repelled.

Wass tried again at 10 minutes, in another distant shot that Ledesma rejected for a corner with difficulties, although it was Cádiz that took the lead in the 13th with a goal from Cala after a center by Fali Giménez.

Valencia quickly responded, only five minutes later tied in a quick attack play that French Kevin Gameiro finished by low after a precise shipment of the Portuguese Gonçalo Guedes.

After the resumption of the match, after provisionally leaving the field as a result of the confrontation between Cala and Diakhaby, the duel was rarefied by the incident and Valencia finished off a stick through the Portuguese side Thierry Rendall one minute before the break.

In the second half, Cala did not appear, who was replaced by Marcos Mauro after the break, and in this period Cádiz began seeking to unbalance the balance with a high header from Álvaro Negredo at the start of a lateral foul, shortly before the first hour. of game.

In the 65th minute, Ledesma had to use himself thoroughly to stop a hard shot from Serbian Uros Racic, while ten minutes before the conclusion the newcomers Denis Cherysev and Manu Vallejo created a play that could end in a goal if not for the stop of the Argentine goal of Cádiz in the auction of the second.

Valencia intensified the attacks in the final stretch and Cherysev had the 1-2 in a cross shot that did not enter by little (m.83), although what came five minutes later was Cádiz’s winning goal scored by central defender Marcos Mauro, who had joined the attack, in a great header after a good center from Iván Alejo.

Referee: Medié Jiménez (Catalan Committee). He admonished the locals Salvi and Cala, and the visitors Diakhaby and Paulista.