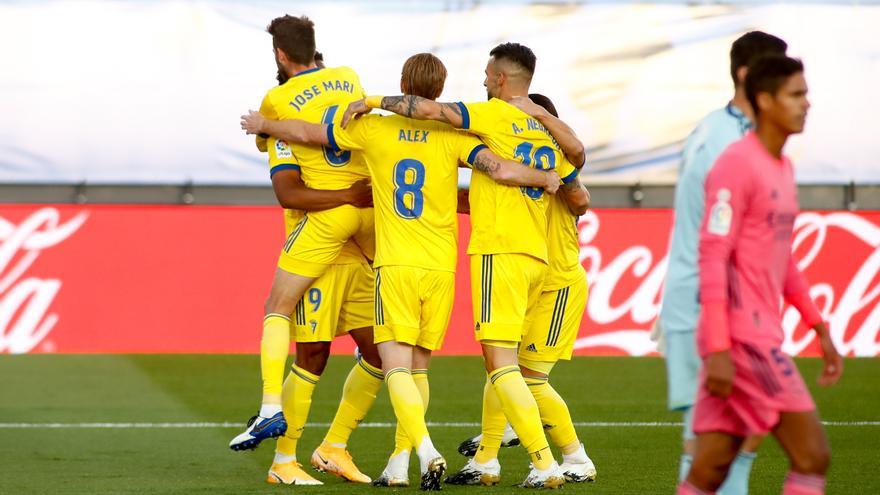 The recently promoted Cádiz applied to perfection in Alfredo di Stéfano his game plan to grow based on an orderly defense that has given him so much profit on his return to the First Division and achieved a historic victory In front of a Real Madrid (0-1) who left the game disconnected and could not recover from the initial goal of the Honduran ‘Choco’ Lozano, conceding the first defeat of the season.

The icy atmosphere in the stands infected the footballers of Zinedine Zidane’s team, who this Saturday wore pink in support of the fight against breast cancer, in an unrecognizable first half. So much so that the surprising, a priori, and well deserved a posteriori, 0-1 of the Andalusian team at halftime seemed short.

The first 90 seconds of the meeting were fulfilled and Álvaro Negredo gave the first warning that he could only save Sergio Ramos on the goal line working hard. The ex-Madridista gave an exhibition to his 35 years making good every ball that passed through him: you pass with the outside, shock with the chest, with the head …

The only thing that Negredo lacked was a hit on goal, as he had two headers that could serve to open the scoring, but he redeemed himself shortly after giving the assistance of the goal of ‘Choco’ Lozano in the 16th minute of the game. It was not a surprise, it was the fifth time for Cádiz. With Madrid’s defense unbalanced, Negredo received from behind, with no one on top, and He served the Honduran with the ball so that he could define with class by poking the ball over Courtois.

The goal gave energy to the visitors, who with their 4-4-2 low block managed to close any space for a Madrid whoand suffered in the starting eleven of the French Zinedine Zidane of footballers who broke lines with the ball at the feet. Only the Brazilian Vinicius had this characteristic, but he did not have the spark that is assumed.

Madrid managed to stop the attacks from Cádiz with possession of the ball, but sterile, and 15 minutes later the yellow team returned to warn. A long pass from an imperial José Mari in the construction and destruction caused another one-on-one with ‘Choco’ Lozano in which Courtois did win this time.

The local team had the best chance, and the only one of real danger, at m.38 with a shot from the French Raphael Varane at the exit of a corner that left brushing the right post of the goal defended by the Argentine Jeremias Ledesma

The bad news for Zidane did not stop at halftime. A clash between Sergio Ramos and Lozano left the Madrid captain limping on his left knee. A blow that prevented him from leaving for about 45 minutes for which the French coach also introduced three changes –Casemiro, Valverde and Asensio by Modric, Isco and Lucas Vázquez-. New plan. In addition, Álvaro Cervera, Cádiz coach, had to leave his striker Lozano in the stands at halftime for said set.

Different names, but Madrid could not overcome El Hierro approach of the visitors. Only Vinicius warned with a header at m.67 taking advantage of a bad start by Ledesma, the second for him in the match, but the shot went wide. Until the fatigue after a game of maximum demand reduced something to Cádiz and the locals began to believe in the comeback.

The proper name of the previous match, the Serbian Luka Jovic, came out on the pitch in the 77th minute and Zidane opted for an ultra-offensive 4-2-4. A desperate plan that came close to paying off. Jovic first at m.79, who He introduced the ball into Ledesma’s goal, but benefited from a prior offside of Benzema.

The French had another clear chance two minutes later with a very powerful shot that crashed into the crossbar, where the hopes of a Real Madrid died that suffered the first defeat of the season just as they began a marathon of maximum demand matches, with three of the Champions League: seven in 23 days .

Historic day for a Cádiz that achieves its first away victory against Madrid and that He continues to add three at a time in all his outings -victions also against Huesca (0-2) and Athletic Bilbao (0-1) -, which make him add ten points in six days.

Incidents: Meeting corresponding to the sixth day of The league Santander played at the Alfredo di Stéfano stadium without fans due to the coronavirus pandemic. Real Madrid wore pink as a show of support in the fight to combat breast cancer, which has its international day on Monday, October 19.

The Tokyo Olympics will allow up to 10,000 spectators to enter