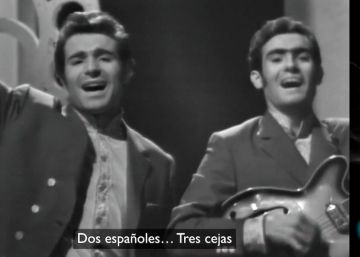 When there is little left to invent, nostalgia can be the most modern. At a time when the billboard is Covered by superhero or galactic sagas and remakes, In the dial there are plenty of radio formulas of eighties and nineties, there is an entire industry for those who made the GBS and fashion surrenders again in the retro, there could be no better plan for the homemade late night on New Year’s Eve than the special Iron and chrome cups in La 2. And, to exploit nostalgia, nothing like music: what you heard as a kid marks you forever, and a couple of chords have the power to give you back hidden memories. Cachitos play that skillfully all year, taking oil from the huge TVE archive. But every New Year’s Eve they give a twist that has been demonstrated a reef: the fragments of songs of more than half a century are presented with hilarious signs, result of the ingenuity of Pablo González Batista and Antonio Vicente.

Cachitos It is done with trade, but it would not be the phenomenon that becomes every New Year’s Eve without that amplifier that are the social networks, where a crowd jells all their jokes in the first morning of the year and reviews them the next morning. “The dresses of the Pedroche were put on by Rafaella to buy bread,” we read about a performance by a glamorous Carrá. “This year Because you are leaving has hit very hard in the headquarters of Citizens “, we see when the theme of Jeanette sounds. Manolo Escobar appears and they write:” Ortega Smith likes this. “

One would tend to think that this program is aimed at a tall public, which revives its best years, but that shocking past also demonstrates its appeal to millennials and zetas, who look at the hymns and extravagances of their parents and even their grandparents. It is good that they take perspective, that they understand that – aside from hairstyles, costumes and choreographies that age badly – before Rosalía Massiel existed, that before Estopa were Los Chichos, that Vetusta Morla is not reached without going through Formula V.

The nostalgia fever It’s not just a demographic issue, that too. It has to do with the fear of risk installed in the cultural industry, which bets everything for sure. The La 2 program is very capable of laughing at itself, which is healthy. I wonder what will be remembered of the current time in the Cachitos from the future.