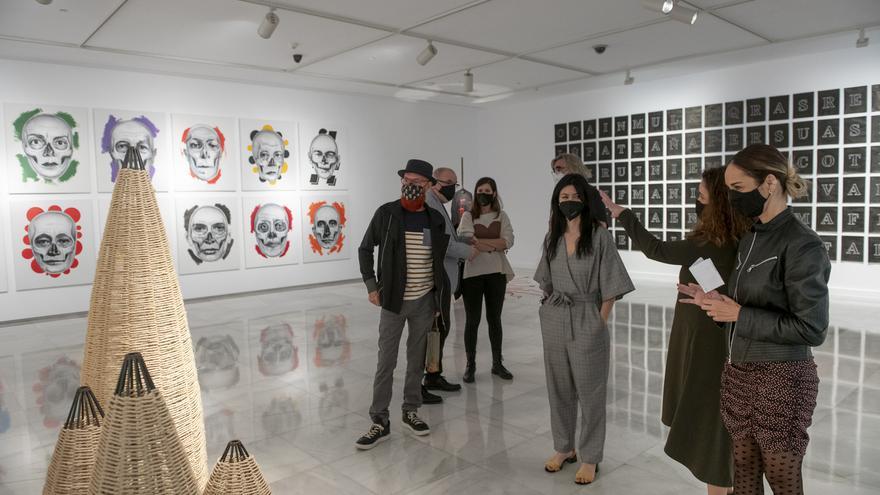 The Atlantic Center of Modern Art (CAAM) renews its artistic productions -for the second time after the start of the current coronavirus pandemic- with three new exhibitions focused on art made in Gran Canaria. The extensive facilities of the CAAM, in its two locations, have been adapted since June to the new health security protocols and remain open to the public, with free admission, during their regular hours.

In this context, the art center of the Cabildo de Gran Canaria opens simultaneously the exhibitions to the public today In / Out: A possible map, which brings together a selection of works by two generations of Gran Canaria artists, and the retrospective Angel Sanchez, dedicated to the work of visual poetry by the artist and writer from Gran Canaria. Both shows will coexist with the exhibition of the four artistic and research projects selected this year within the program ‘Artistic residencies’.

With a global budget of 191,000 euros, the new exhibitions can be visited, with free admission, until March 7, 2021. The art residency exhibition ends earlier, on January 17.

They are proposals that are part of the commitment of the CAAM and the Cabildo de Gran Canaria to produce projects that contribute to giving visibility to the work of creators who reside or were born on the Island, in a context marked by the current social and economic crisis generated by the coronavirus pandemic.

The exhibition In / Out: A possible map. Two generations of contemporary artistic creation from Gran Canaria brings together a selection of works signed by 42 artists who reside or were born in Gran Canaria. It is curated by historians and researchers, Gemma Medina and Diana Padrón, also from Gran Canaria. It is a project that is deployed both in the CAAM headquarters (floors -1 and 0) and in the CAAM-San Antonio Abad space. Its budget amounts to 116,790 euros.

The exhibition reflects the plurality of contemporary artistic genres and languages, including pieces of painting, sculpture, drawing, video, embroidery, performances or installation, among others, created by artists from Gran Canaria who work, mostly, since the decades of the 80s and 90s of the 20th century.

In the words of its curators, the exhibition is presented as “a cartography that aims to reveal some of the contradictions of a world threatened by the environmental crisis, economic confusion and social inequality, trying to activate our ability to imagine other futures”.

The project is articulated as a “map of collective dialogues” that, under a critical view, is presented divided into three sections: a first that proposes a diagnosis of the present in culture and current society (CAAM-floor 0), another that offers a critical look at the structures that govern society or the artistic institutions themselves (CAAM-floor -1) and a third one referred to future strategies (CAAM-San Antonio Abad).

The exhibition Angel Sanchez pays tribute to this renowned artist, writer and anthropologist from Gran Canaria, winner of the 2018 Canary Islands Literature Prize, who has stood out over the last five decades for his valuable contribution to culture and for his interesting creative and research work.

The exhibition project brings together a selection of a hundred of his works of visual poetry, created from 1974 to 2019. The historian and director of the León y Castillo House-Museum of the Cabildo de Gran Canaria, Franck González, is the curator of this exhibition, whose budget is 61,670 euros.

Ángel Sánchez Rivero (Gáldar, Canarias, 1943) defines himself as a mestizo author. Intellectually trained in several European countries, he has frequented literary genres such as narrative, poetry, translation and essays, using sign media, such as typography and calligraphy.

His visual poetry forms a unique corpus of work with an attractive aesthetic value, in which he mixes different genres. In his work he uses tools and materials such as rotring, brushes, ink, pencils, photocopies, prints on fabrics, photographs, linocuts, stamps or collages, among other. Special mention, says the curator, deserves his reflections on the event and the island iconography, also reflected in two of his reference works: The house dressed and The insular sign.

The third proposal that opens the exhibition season at CAAM is the sample of the results of the four projects selected through a public call, within the program Artistic residencies 2020, aimed at creators and creators from the Canary Islands and the rest of Spain.

This year, the projects that the public will be able to visit are those signed by Azahara Cerezo (Girona), Atilio Doreste (Gran Canaria), Paula Ducatenzeiler (Gran Canaria) and Adonay Bermúdez (Lanzarote). Their samples remain on display on the second floor of the CAAM, until January 17, 2021.

His projects are titled ‘An optical time’, by the Catalan creator Azahara Cerezo; ‘Sub floor’, by the artist from Gran Canaria Atilio Doreste, and ‘Living sense: the synaesthetic frequency of sound and light’, by the artist also from Gran Canaria Paula Ducatenzeiler, as well as the research project ‘And where is the Canary Islands? Understand and assimilate Africaneity from a Canarian perspective ‘, made by the curator and cultural manager of Lanzarote, Adonay Bermúdez.