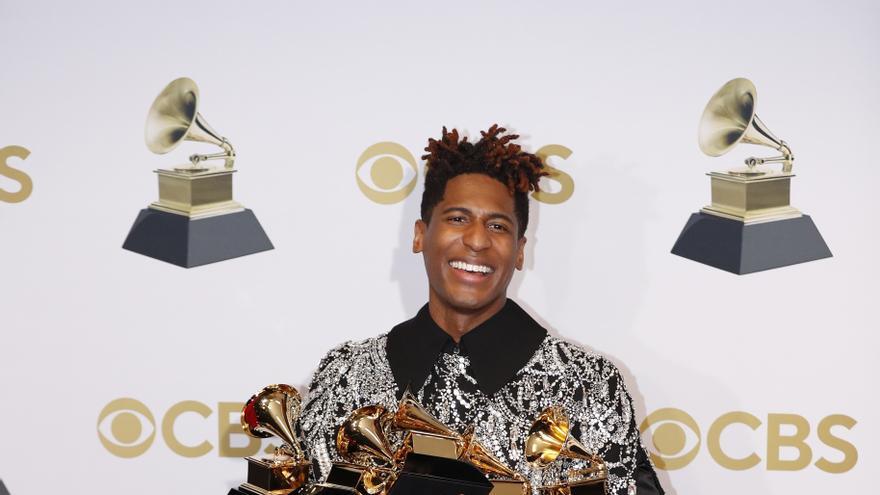 Jon Batiste, with five awards including album of the year, and the duo Silk Sonic, winner of song and recording of the year, were the big winners of the 64th edition of the Grammys.

Zelensky at the Grammys: "There is nothing more opposed to war than music"

Thus, funk and soul were imposed on pop in the most outstanding categories of a ceremony that, at its central moment, was attended by the President of UkraineVolodymyr Zelensky, through a recorded video message.

"There is nothing more opposed to war than music," said the president before the deathly silence of the public present at the MGM Grand Garden Arena in Las Vegas (USA), the improvised venue for an event that should have been held in January in Los Angeles but that the omicron variant of the coronavirus forced to postpone until this Sunday.

It was the only moment of silence at a gala that celebrated the return of live music in style after more than two years of the pandemic.

Zelensky himself noted it in his speech: "We will be free as you are being today on the Grammy stage."

Immediately afterwards there were two direct appeals to freedom: John Legend premiered the ballad “Free” on the piano and Batiste shone with a colorful performance for his single “Freedom”, in which he ended up on the table from which Billie EIlish and Finneas followed the ceremony.

It was the big night for Batiste, who came in with 11 nominations, second only to Michael Jackson in 1984 and Babyface in 1997.

Finally he won five awards, including the best soundtrack for the music of the film "Soul", which already won the Oscar last year.

“I believe it to the bottom of my heart. There is no better musician, song or actor. The arts are subjective”, assured the composer, before the excited look of Lady Gaga, when collecting the award for album of the year for “We Are”.

Silk Sonic: four Grammy a year after its debut

The other two big prizes, the recording (recognition to producers and engineers) and song of the year (award to composers), went to the song "Leave The Door Open", the presentation single of the duo Silk Sonic, formed by Bruno Mars and Anderson .Paak.

The song, which premiered at last year's Grammys, swept gold gramophones by also being crowned best R&B song and performance.

Mars, who has Puerto Rican descent, thus added his third Grammy to the recording of the year, after winning it in 2016 with “Uptown Funk” and in 2018 with “24K Magic”.

The revelation artist is Olivia Rodrigo

Olivia Rodrigo did not have the same fate, who aspired to win in the four star categories (album, song, recording and best new artist) and only won in best new artist.

"My biggest dream has come true," said the singer who, at 19, has experienced a vertiginous rise to fame, going from being almost unknown to one of the greatest musical phenomena.

Although his ballad, "Drivers License", did not win anything, Rodrigo also took the Grammy for the best pop performance and the best pop vocal album for his debut "Sour", which was imposed on the works of Doja Cat, Justin Bieber , Ariana Grande and Billie Eilish.

Eilish, who made history two years ago by winning all four main prizes at the age of 18, failed to score a win.

Still, the singer starred in one of the most talked-about performances of the night with "Happier Than Ever," which she performed wearing a T-shirt bearing the face of Taylor Hawkins, the Foo Fighters drummer who passed away last week.

It was one of many moments in which the band, which has won three Grammy Awards and should have performed at the ceremony, was remembered.

"I should be hosting the Foo Fighters performance," gala host Trevor Noah said as he announced a tribute to Hawkings, followed by another to coronavirus victims.

The war, illness and death did not finish obscuring an event that featured, among other surprises, the first public appearance in years of Joni Mitchell, who two days earlier starred in a gala dedicated to her admired musical career.

The Koreans BTS also did not get any awards to the chagrin of their dedicated followers and Doja Cat starred in one of the most surreal moments, recognizing that she had just left the bathroom to accept the Grammy for best collaboration for "Kiss Me More", along with SZA .

The Spanish, ignored in the big categories, sounded thanks to the numbers of J Balvin, María Becerra and Aymeé Nuviola.