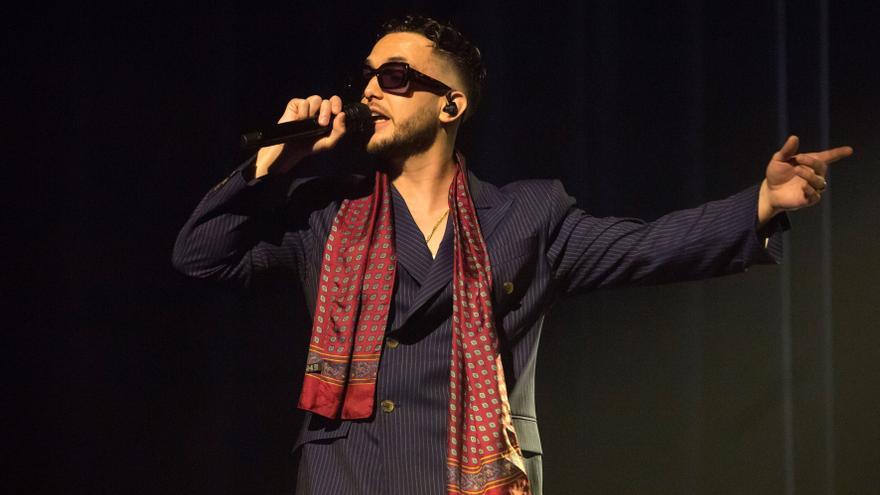 The first concert of the tour 'El Madrileño, Sin Cantar ni Afinar Tour' of Antón Álvarez, known asor C. Tanganastarted this Saturday in Malaga around 9:30 p.m. to applause and cheers of an enraptured public that had sold out tickets days ago to listen to the performer of the best-selling album in 2021.

Dressed in a dark pinstripe suit, burgundy scarf and black sunglasses, C. Tantaga came on stage to the rhythm of 'El Milagro' and with his arrival the stage was lit upwhich more than that of a fashion concert seemed like that of a play.

When that virtual curtain rose, the light revealed a large party room typical of the films of the golden age of Hollywoodof those who starred Rita Hayworth or Humphrey Bogartwith waiters, orchestra, bar, table and black-tie public included.

With this background scenario came the first of the new songs, 'Te venero', which he presented during the Goya gala along with the legendary Omara Portuondo, and then 'La Culpa' -the second of the new ones- which he performed together with Omar Montes and Canelita, and 'Bobo', the third, by the Dominican Luis Segarra, whom he referred to as the 'father of bachata'.

A risky staging and different from what is used to seeing massive concerts in recent times, but attractive and certainly very much in keeping with a show that left none of those present indifferent and full of nods to flamenco.

At the back of the stage, an important celebration table full of bottles, glasses and glasses, and around it a large flamenco group, including Juan Carmona with the guitar and the singer Noemí.

That was the moment chosen to interpret 'We are not crazy' by the emblematic Ketama and 'Mala, Malita', in addition to 'Ungovernable', 'Although you don't know it' and the new versions of 'Los Tontos' and 'Me Maten'.

With 'La Limo', 'Comerte Enta' and 'Muiendo de Envy', together with the Ball, or 'I'm Never', the auditorium came crashing down and burst into a clamor when C.Tangana sang Elvis Crespo's 'Suavemente''that song that you like and that you always play at the end of the party,' he commented with a laugh.

Flamenco group in front of the stage to 'A poison', whose original version includes along with child of elche in the anniversary edition of 'El Madrileño''Al di la' and to finish some fragments of the popular song by the eighties group La Unión, 'Lobo- hombre en París'

Some thirty songs -organized into four blocks depending on where they were performed on the stage- gave life to this concert, which included the songs from the reissue of 'El Madrileño', which is now celebrating its first yearand the three new pieces.

The 7,500 people who gathered at the Martín Carpena sports hall, transformed into an auditorium for the occasion, sang and danced to the rhythm of the chords of a concert that did not disappoint, due to how the public claimed Pucho - his father's nickname - before the imminent arrival of the finale.