The Faramontanos town has had a new free public bus service since yesterday which will be kept all year round and will allow all the neighbors who wish and need power travel to Tábara to carry out your banking operations.

The new service arrives as a matter of urgency after the decision of Unicaja, an entity that had many clients in the town, to abolish the "Mobile Office" with the arrival of January 2022 installed on a bus that had been providing effective service to numerous Alistani, Tabares and Albarino towns, as well as the rest of the province of Zamora.

The mobile unit was an innovation in its day and very well received by the residents of the rural world since it starts with bringing employees to personally attend to the neighbors and cash reimbursements, updating of the passbooks or payment of receipts and transfers, it also had with cashier. He even carried a security guard. Each client received at the beginning of the year a calendar of their activity and thus they already knew the day and time that they would arrive in each town.

The Government Team of the Faramontanos de Tábara Town Hall integrated has taken the urgent agreement, when the town is left without service, and the Mayor's Office will inform the entire Municipal Corporation at the next plenary session.

The first day of the service was a success and the neighbors themselves valued it as “a magnificent idea. It is clear that the best thing is that the mobile office continues to come to Faramontanos, but if it cannot be, having a bus on a fixed day will help us. Many of us are already elderly, some over 90 years of age who also or do not have their own vehicle ”. And they showed their gratitude to the City Council; "They have acted quickly and have given us a good solution to the problem."

The bus will serve once a month leaving from the Plaza Mayor de Faramontanos (in front of the church of San Martín de Tours and the Town Hall) and will stop next to the church of Santa María de Tábara and the crossing of the National Highway 631. Once all the residents carry out their banking procedures, the bus will take them back to Faramontanos.

The Mayor Amaranta Ratón Fresno states that “The only way to offer a decent quality of life in the towns is to maintain all services, because it is a right that all neighbors have, and especially older people who lack the means to move around. Families need to carry out their banking operations and we believe that the fairest thing is to make it easier for them to travel to Tábara ”. 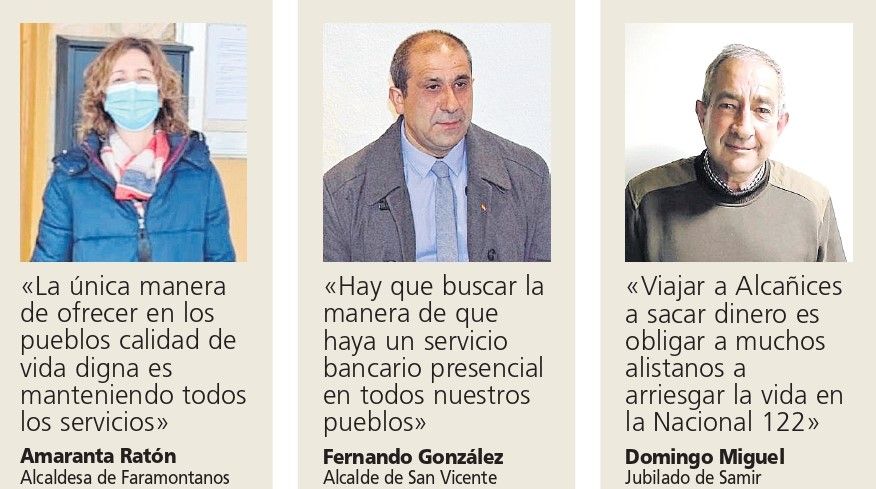 Faramontanos is one of the largest towns in Aliste, Tábara and Alba with 332 inhabitants (169 men and 163 women). The maximum seasonal population of people who have some connection or relationship with Faramontanos, whether because they reside, work, study or spend a period of time in it, exceeds a thousand people, according to data from the Ministry of Finance and Public Administrations.

Aliste, Tábara y Alba is a region with a very high rate of population of the elderly: “We are no longer able to travel alone, but it is also that a great majority do not have their own vehicle and a driving license, and others, age does not forgive, if we go out on the road we are a danger to ourselves and to others, with which at the level of mobility we are totally dependent ”.

In Ready, if Unicaja maintains its decision to dispense with the mobile office, the Commonwealth of Services "Tierras de Aliste" will be the first to carry out its threat and once the Christmas holidays are over, it will proceed to cancel all its accounts and operations next Monday. , as agreed unanimously in the last general assembly of last year 2021. The same will be done by the 12 city councils and mayors that make it up.

Seniors show their concern and discomfort: “Much talk about Empty Spain but we are going from bad to worse. If services continue to be eliminated, the problem is not that no one wants to come to live in the villages, the worst thing is that the few that remain will have to leave because at this rate living in the villages is not lucky, it is to be condemned while alive " . There are city councils willing to offer a free location to the bank that places employees to go to the towns to attend in person. The closure of most of the bank branches of yesteryear, –only Caja Rural keeps them open–, forces travel to the three headwaters of the sub-regions: Alcañices, Tábara and Carbajales. A severe setback for the elderly who are already in the majority.