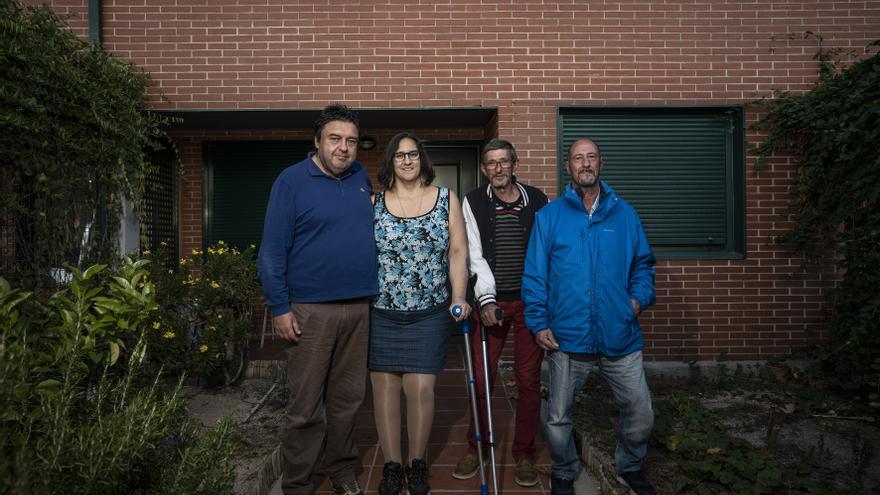 Gain time. Recuperate. Get off the street for good. Time to think about what your next steps will be, but also to fully heal with rest and continued access to health. That is the thesis of Hogar Sí’s health recovery housing program, which has a center north of Madrid with 60 places. When you don’t have to think about where you will sleep the next night each day, it is possible that a person can recover from an ailment. Hogar Sí provides time for people trying to get away from the streets.

“On the street or in collective resources [como albergues], one is there and dedicates all the energies and all the time of the day to survive. When you are also ill, you dedicate a lot of energy to going to the emergency room and convalescing in a place where you cannot be, where you cannot take medication “, explains José Manuel Caballol, general director of Hogar Sí.” When You have all that assured, what you have is a peace of mind like that which any citizen has when we are sick at home, which allows us to address some of the things that we have left aside or that we have not done for a long time, “he says. “They can put their heads in other activities that, far from being survival, are even pleasant. They have to do with leisure or emotional recovery, “says Caballol.

If you have time, it is also feasible to study whether a person has the right to receive a benefit, such as the minimum vital income or non-contributory pensions, or to start considering a new career path. Alfonso, Patricia, Manuel, and Miguel Ángel lost their jobs, then their home, and then fell ill. The four of them want to recover and start over.

“Here I am in glory,” says Miguel Ángel, who is 59 years old, was born in Almagro (Ciudad Real), but feels almost like Madrid. You have just received a diploma because you have won a mus championship. His hands brush the plastic sleeve that protects the paper with his full name: Miguel Ángel Manzano Parra. It’s a nice name, he says. He does not want to go back to the Cañada Real. There, during Filomena’s storm, he had an accident while trying to remove the snow from the roof of the house in which he lived. The roof collapsed and he ended up in the hospital with several fractures.

His hip still hurts. “The roof was filled with snow, the house was a bit old, but I was trying to maintain it well. I went up to shovel the snow and bang! The roof broke. It was a total accident.” A neighbor picked up Miguel Ángel and took him to the Gregorio Marañón emergency room. That part does not remember. He was on morphine for more than two weeks.

Still, he is grateful. “Every day I improve more. I am very grateful to all the assistants, doctors and colleagues.” He explains that within the program he has recovered his quality of life and that he is not overwhelmed each day by what the next day will be like.

Michelangelo was a home restorer and decorator. When he recovers, he hopes to find work soon. “My obsession, what I would like is to fix my hips completely and to be able to function. Not to move the same weight as before, but to be able to move freely. Climbing up and down a scaffold. As soon as I recover, I have plenty of work to do. “.

Manuel is from Barcelona, ​​he is 50 years old and has many concerns. You have hours in the day to complete all the activities you have in hand. In the mornings he is attending a course to be a hotel receptionist, he has become fond of cooking and on Sundays he is a soccer referee delegate in Seseña. For 25 years she was a referee and a women’s futsal coach, but now she can’t run.

“I lost everything with the pandemic,” says Manuel with a slightly broken voice. “I caught the coronavirus on March 19, just when it began. When I began to recover, you could no longer go out on the street. I worked distributing advertising. I lost my job and the company closed,” he recalls. He lived on what he had saved while he could, money that he saved to start a sports project in a town in Toledo. “I spent all the money. They kicked me out of the house because I couldn’t pay and that’s when I started living on the street.” His roommate was able to go with his family, but he could not.

Soon after, he fell ill again. “He gave me everything for the second time and I ended up in the hospital. The coronavirus did not hurt me at first, but it made my heart become small, that I could not pump or breathe. It left me without strength.”

To start over, you need one thing: “Fundamentally, money. Because you win, we have interest in projects, we all have, each in their own way, with their style. But we have a project, an interest and a will to live. The problem is that we do you don’t have to pay for it, it’s very difficult. ” When the time comes to leave the Hogar Sí center, he wants to share a flat with two more people, as soon as they are all recovered.

Alfonso had a stroke while on the street. He is from Madrid, he is 62 years old and he spent more than 30 years working at Banco Santander. “There was a terrible ERE. They threw 15,600 people out onto the streets,” he recalls. After that, he couldn’t find another job that paid well. “They offered me to another bank for their online banking, but with totally leonine contracts that they didn’t even give me to survive.”

He lived on the streets for two years and, after the stroke, he was admitted to the San José hospital. She has now been in the health recovery housing program for seven months. “This leads you to have a much better quality of life than you had.” He sounds grateful and is smiling all the time.

“Here I have recovered, not the illusion of being a bank again, because I had been in a bank for 35 years. But the contacts that I had made in that job,” he explains. His main obstacle is that he does not have his own computer, so whenever he can, he borrows one. “I have put the contacts to work and right now I am with a project that at the moment has not produced capital.” He has the illusion of being able to contribute part of the money he manages to earn in the future to Hogar Sí’s projects. “I am already beginning to see the first little light at the end of the tunnel.”

There are two things that excite Patricia above all: her granddaughter and sewing. The 49-year-old Uruguayan spends much of her day making repairs with her sewing machine and hopes to make a living from it later. Only with the orders that he has in the center has a lot of work. “They don’t give me the hours because honestly I have a lot of work to do as colleagues who live here.” Now he walks with a crutch, but he was unable to move for a long time.

“When I became paraplegic, they killed me. First I was admitted to the Jiménez Díaz Foundation and then they sent me to Toledo. My daughter was pregnant. I missed her entire pregnancy, I missed being there. When my granddaughter was born, I lost my partner “he remembers bitterly. “He dumped me at the worst moment. I lived with him. The house was his.”

During the months that she was admitted to the National Hospital for Paraplegics, she could not receive visits “because there were patients with COVID” and her daughter was pregnant. “It was a stroke of loneliness that was very hard to bear.” A year and two operations later, he has walked again. “I had to get my legs back because I wanted to be a grandmother, take my granddaughter to the park and all those things that one has always seen grandparents do,” she says.

When you ask him what he would ask the rulers to improve access to housing for people with fewer resources, he suggests that construction be reactivated or that the houses that are empty be filled. “It is not just a problem in Spain because I am Uruguayan and it is the same there. Suddenly you go down the street and there are lots of abandoned houses.”

One of Hogar’s claims is that, within the housing law, fiscal measures are implemented that facilitate the third sector to rent housing for social use. For example, Hogar Sí has ​​300 homes throughout Spain that are dedicated to its ‘Housing First’, housing first. It is a model to provide a home directly to people who need it and that has already been proven profitable in countries such as Finland, Belgium or France. They are also working on three other avenues: their solution for health recovery, Employment Health and Housing Led, another of the shared housing programs. In Spain there are about 30,000 homeless people.

“We have 300 rental homes throughout Spain that we exclusively dedicate to projects for the homeless and we have more disadvantages than any citizen to be able to rent these flats, because as we are a legal entity, we have to withhold personal income tax, we have to pay VAT” Caballol explains. “What we are asking the Government is to include in this housing law some fiscal measures that encourage third sector entities to rent homes in advantageous conditions, as long as we allocate them to this type of program.”

The general director of Hogar Sí considers that this type of proposal “is easy for everyone to understand.” “There is a draft that will soon go to Congress. In that sense, we will defend it before the parliamentary groups and we will propose that they present amendments in that direction,” he says.

Tags: get out, home, life, stories, Street, to win, weather