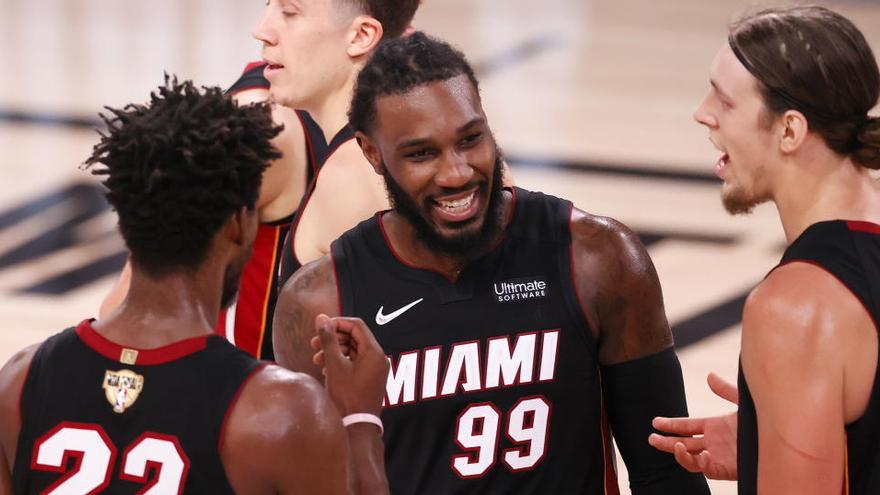 The eaves Jimmy Butler established his best mark as a professional in the playoffs by contributing a triple-double of 40 points, 13 assists and 11 rebounds that allowed the Miami Heat win this Sunday by 115-104 to Los Angeles Lakers in the third match of the Finals of the NBA.

The surprise victory of the Heat, was the first of the series that they dispute to the best of seven and that now is with 2-1 lead for Lakers team. The fourth game will be played on Tuesday in the same scenario of the Orlando bubble.

Despite the injury casualties of the starters, Slovenian point guard Goran Dragic and center Bam Adebayo, for the second consecutive game, this time, the Heat, thanks to Butler, not only achieved their first win in the series, but also they showed that they play better with the reserves.

The inspiration of Butler, who achieved the third triple-double of 40 points in the history of the Finals, revealed the much acclaimed superiority of the Lakers, that unlike the previous two games, their two stars, center Anthony Davis and forward LeBron James did not show their greatest intensity.

Quite the opposite of what happened with Butler, who scored 14 of 20 shots from the field, and 12 of 14 from the personnel line, in addition to recovering two balls and putting two plugs. Butler had 19 points, six assists, six rebounds and two steals at halftime when the Heat also finished up on the scoreboard with a 58-54 run.

The only other player to do all that in the first half of this season was American center Karl-Anthony Towns with Minnesota against Charlotte on October 25.

Along with Butler, rookie guard Tyler Herro and Canadian center Kelly Olynyk, who came back out of reserve, scored. 17 points each as the Heat’s second-highest scorers. While guard-forward Duncan Robinson and forward reached 12 goals each.

This time, James finished as leader of the Lakers, by getting a double-double of 25 points, 10 rebounds and eight assists, which were not enough to give his team the victory, but he set another individual record. James, 35, now has 843 assists, which is 222 more than anyone else. This season, while Denver’s Serbian center Nikola Jokic is second with 621. That will be the biggest margin between first and second in the NBA since 2004-05, when Steve Nash (1,031) was 363 more than Stephon. Marbury (668).

Reserve power forwards Kyle Kuzma and Markieff Morris, who were “surprisingly” given more minutes by Lakers coach Frank Vogel to the detriment of Davis, had 19 points each. Davis, barely played 33 minutes, and finished with 15 points after scoring 6 of 9 field goals, including a two-shot triple, and 2-2 from the personnel line. But, unlike what had happened in the two previous games, Davis did not have a leading role in the inside game and finished with five rebounds, three assists and two ball recoveries.

Neither did the Lakers as a team that let the Heat always be in control of the scoreboard, but without straying too far, until in the final stretch, the Los Angeles team if he made the concession that secured Miami’s victory and extend the series, at least, until the fifth game, a “blessing” for television.

Hence the big questions left by the third game, such as seeing the Lakers make a 20-6 streak and take a partial advantage of 91-89 and 8:55 minutes to play in the fourth period and then disappear from the field to let the Heat be the one to dominate again with Butler as a figurehead.

The Heat guard-forward became the 21st player to have a triple-double in the NBA Finals, and four of the 21 were part of Sunday’s game, led by James, who has 10, all-time leader, veteran guard Rajon Rondo of the Lakers, Jason Kidd, who have one each.