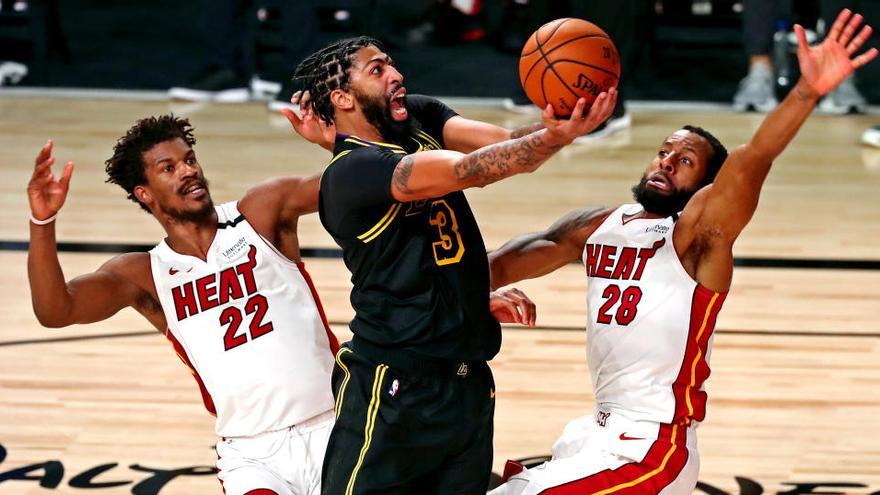 The eaves Jimmy Butler contributed a triple-double of 35 points, 12 rebounds and 11 assists, and the Miami Heat they beat this friday by 111-108 to Los angeles lakers in the fifth game of the NBA Finals that dispute the best of seven.

The win kept the Heat alive by getting the second of the series that remains in favor of the Lakers 3-2 and the sixth game will be played on Sunday on the same stage of the bubble of the Walt Disney World recreational complex, in Orlando (Florida).

The Miami team saw guard Danny Green’s 3-point attempt in the final seconds hit the rim and although the offensive rebound was captured by power forward Markieff Morris, then he did not find the pivot Anthony Davis inside the painting and he sent the ball out.

The Heat, with the partial 109-108, forced the personnel that the Lakers made to rookie guard Tyler Herro and with 1.6 seconds left he was sentenced with two free throws.

The eaves Duncan Robinson regained his best wrist touch, especially with shots from outside the perimeter and contributed 26 points, including seven 3-pointers from 13 attempts, which left him as the second leading scorer.

The Heat ended the game with a roster of seven players who had double-digit numbers.

While the Lakers had the star forward Lebron James as his leader in all facets of the game by getting a double-double of 40 points, 13 rebounds and seven assists, which this time were not enough to decide the victory.

James surpassed Karl Malone for second place on the NBA’s all-time scoring list, including playoff and regular season games, having played his 259th game, tied with Derek Fisher for the most in NBA history. playoffs.

Davis also maintained his status as a key player of the Lakers with a contribution of a double-double of 28 points, 12 rebounds, three assists, three ball recoveries and three blocks.

But he failed, like Morris, in the decisive play of the loss of the last ball that prevented them from having had a chance to score the basket from the provisional advantage.

Guard Kentavious Caldwell-Pope reached 16 points and was the player who with six minutes remaining, scored five consecutive points that allowed the Lakers to get ahead on the scoreboard (97-96) this time without being able to keep it the rest of the way.

Nor did the decision to have changed the traditional uniforms for the one dedicated to the memory of Kobe Bryatn helped the Lakers achieve the triumph they still need to proclaim themselves NBA champions.

Until now, the “Mamba” uniform had given them luck with a perfect 4-0 record, which they no longer have after their loss to the Heat that was full of drama and suspense, like the one they always liked to experience Bryant, who was the last Lakers figure to win the NBA title in 2010.

With a back-to-back exchange leading the score, in the closing minutes, Heat coach Erik Spoelstra used his last time out before the next possession, only to give Butler a couple of minutes break.

He was the player he needed to have on the court and Butler did not disappoint him by making a penetration with which he forced the staff and with 16.8 seconds remaining he scored them and put the partial of 109-108 in favor of the Heat.

The Lakers’ mission at that time could not have been simpler than to score the basket that gave them the title of champions.

They couldn’t do it. James found Green just for a high-level triple that he missed, and Herro finished him off with two free throws.

The comeback that the Lakers had achieved, they were down 93-82 at the start of the fourth period Nor could it happen and now, James, for the first time, begins to feel the pressure in the NBA Finals, where he is aware that he has no more margin for error.

While Butler became the sixth player in the history of the NBA Finals to have multiple triple-doubles in the same series, something that Magic Johnson and James had already achieved, both three times.

Whereas Larry Bird, Wilt Chamberlain and Draymond Green did it once.

Butler scored 22 points in the first half, the second-most in Heat Finals history. Dwyane Wade was 24 at halftime in Game Four of the 2006 NBA Finals.