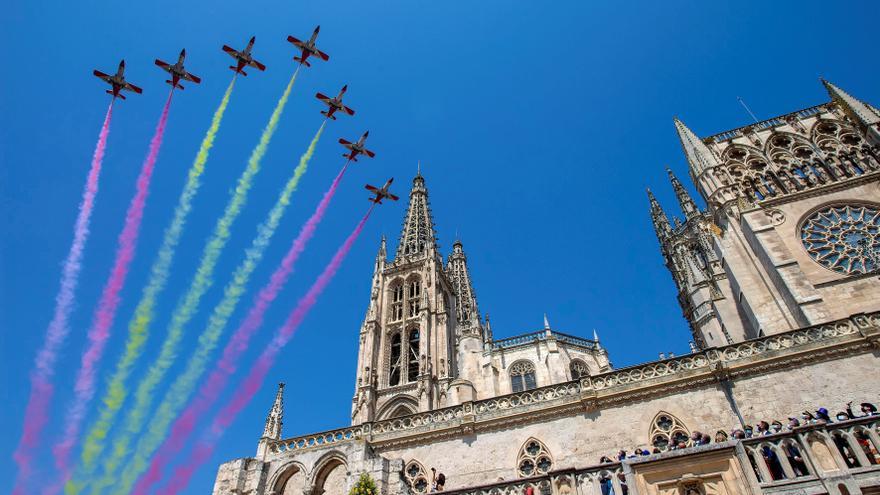 Burgos, Jul 20 (EFE) .- Burgos has commemorated this Tuesday the eight hundred years of life of its cathedral, declared a World Heritage Site in 1984, and which after the investment of 40 million euros made in the last 25 years looks splendid to the recover to a large extent the original state of this temple, damaged by the passage of time.

The current cathedral is built on the old Romanesque cathedral in which Ferdinand III and Beatrice of Swabia were married, which was too small for the marriage and which motivated the King and Bishop Mauricio to decide to build a new one, a work that began with the Laying of the first stone eight hundred years ago today.

Burgos Cathedral is since 1984 the only Spanish cathedral declared a World Heritage Site by UNESCO independently and without being linked to the historic center of the city.

In the construction and in the ornaments of the temple, characterized by its spiers – the work of the German artist Juan de Colonia -, some of the most cutting-edge artists in Europe participated, many of them from France, which marked the Gothic style of the temple.

Since the laying of the first stone, the cathedral has been incorporating new elements, some emblematic, such as the Golden Staircase, which was installed in the 16th century, or the dome located over the central nave, which had to be rebuilt when it sank. also in the 16th century, the one originally designed by Juan de Colonia.

In the middle of the Camino de Santiago, the seo also has its jubilee year declared by Pope Francis, with the main door, that of Santa María, turned into the ‘Door of forgiveness’.

It is precisely the set of three doors on that façade that has sparked the controversy, after a collection of more than 65,000 signatures on a digital platform against the new bronze doors designed by Antonio López.

In fact, the archbishop announced a few months ago his resignation to install the new doors for the celebration of the centenary, although the artist continues with its elaboration and, according to the archbishop of Burgos, Mario Iceta, they will end up in the cathedral although UNESCO does not allow that are installed in the intended place.

Another key moment in the history of seo was on August 13, 1994 when what is popularly known as ‘The Miracle of San Lorenzo’ took place.

In reality, it was the fall from the main facade of the cathedral of a large stone statue of Saint Lawrence.

It was seriously damaged and could cause a tragedy but it became the starting gun for institutions, companies and individuals to engage in a comprehensive restoration that has practically concluded.

The last item recovered was the transalt, consisting of five reliefs, three of them from Vigarny, from the late 15th century, which were badly damaged by damp and had to be dismantled and reassembled to ensure their consolidation and maintenance.

A foundation with public and private capital, chaired by the Archbishop of Burgos, was created four years ago to design and organize activities around the centenary.

Most of them are religious and cultural, although this year’s Vuelta a España has also been achieved outside the cathedral environment.

The VIII Centennial of the Cathedral Foundation, the Provincial Institute for Sports and Youth and the Burgos Ultrafondo Sports Club have also organized the route ‘800 years – 800 km’ on July 22, 23 and 24, to commemorate the work of the artisans and artists who worked in the Cathedral of Burgos.

Starting and finishing at the Seo Burgosa, in addition to Burgos, it will cross the provinces of Palencia, Valladolid, Segovia and Soria, as well as La Rioja.

Burgos society has paid tribute to its cathedral this Tuesday, although the covid limitations have conditioned the acts, with limited capacity and safety distance inside the seo, during the Eucharist, and limitation of attendees in the Plaza del Rey San Fernando, in front of the Cathedral.

After the Eucharist, presided over by the Archbishop of Burgos, Mario Iceta, which was attended by several active bishops and emeritus, the abbots of San Pedro de Cardeña and Santo Domingo de Silos and the president of the Junta de Castilla y León, Alfonso Fernández Mañueco, the ‘Patrulla Aguila’ has made several passes in acrobatic formations over the cathedral, with its seven Spanish-made Casa C-101 aircraft.

From the balcony of the cathedral, Monsignor Iceta has highlighted the unity of Burgos around his temple, and the mayor of Burgos, Daniel de la Rosa, has considered that it is “the common project of the entire city throughout its eight centuries of history and has assured that “Burgos has an important past, but also present and future”, because it has been enriched and has welcomed people who brought other cultures and customs with hospitality.

The central activities of the centenary began yesterday with the singing of Vespers by the Benedictine monks of Santo Domingo de Silos and the lighting of the new exterior lighting of the temple and will continue tomorrow with an act in which children will be the protagonists.