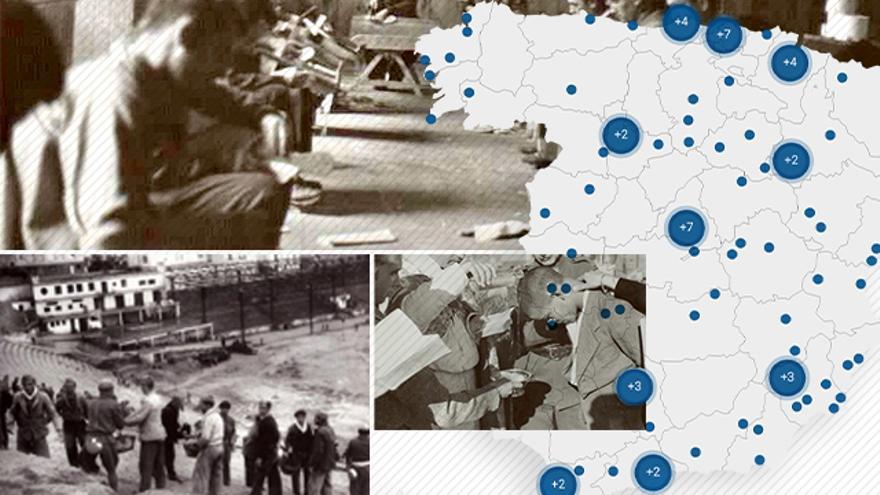 The Franco regime did not take even 24 hours to open the first concentration camp in Spain. From the military uprising in July 1936 until well into the dictatorship, there were almost 300 enclosures of this type that functioned as a method of repression. Although some were built from scratch, most were buildings that already existed: churches, convents, schools, military facilities, bullrings, soccer fields or prisons. Today some are no longer preserved and the exact location of others is unknown, but there are a hundred that are still used for what they were initially conceived or have been converted without anything remembering what they were then.

This has been documented by the journalist Carlos Hernández, whose research embodied in the book Franco's concentration camps has served to shed light on a chapter of history that the Franco regime conveniently took care of hiding. The signposted fields – in which at least a plaque has been installed that reminds what they were used for – are an exception. Thousands of citizens pass through, visit, study, stay or go to shows every day without being aware of the horror that those same places designed to punish the red enemy contained.

Some are used today for the same purposes for which they were built at the time and others have been remodeled and their use has been modified. There are practically in all provinces. The PSOE has registered an initiative in the Senate to urge the Government to signal them. As confirmed by the Secretary of State for Democratic Memory, it is something that will be discussed at the next Sectoral Conference. "It must be done with the communities, so we will open a line of collaboration and financing with the aim that the fields be marked and memorialized," says Secretary of State Fernando Martínez.

The Franco regime turned around twenty bullrings into concentration camps, where bullfights and other shows attended by thousands of people are now held. Few know that Valencia, which is also one of the emblematic buildings of the city, became a field in April 1939. Also the square of other capitals such as Malaga, Las Ventas de Madrid, Teruel, Castellón, Gijón, Alicante or Santander. As a general rule, in the camps a selection was carried out and the prisoners were divided into categories. The "disaffected", considered "recoverable" by the regime, were sentenced to forced labor.

Some fields are now hotels and tourist accommodation. This is the case of the Hospedería de San Julián, in Cuenca, or the inns of Lerma and Sigüenza. The Ducal Palace of Lerma, in Burgos, had a capacity for 500 men but it doubled that figure. The Sigüenza field was located in the ruins of the medieval castle from the 12th century and functioned as such between December 1937 and April 1939.

It is estimated that between 700,000 and a million people passed through the camps and were subjected to "mistreatment, died of hunger and disease" or were killed. They were, as a general rule, places of extermination, selection, punishment and "reeducation" of the inmates, most of them prisoners of war, but also politicians.

There are camps that were located in prisons, such as the Puerto de Santa María, which is now a cultural center, or the Santoña prison, which is still a penitentiary center through which 3,000 prisoners passed. In the province of Cuenca, the Monastery of La Merced de Huete, which today is the headquarters of two museums, came to congregate 650 men while in the monastery of Uclés activities are currently carried out that range from spiritual encounters to celebrations of wedding. The Riojan municipality of Haro had a concentration camp in an old leather and fur factory that had a capacity for 2,000 prisoners. The building is still standing and has once again housed a small business.

The case of soccer stadiums that were converted into fields has also been documented by Hernández. All were demolished, although new stadiums are now being built in the place occupied by some, such as the Rayo Vallecano or the Santiago Bernabéu. In the Chamartín camp, the Real Madrid camp, between 15,000 and 20,000 prisoners were overcrowded in April 1939. The Metropolitan Stadium, where Atlético de Madrid played before moving to the Vicente Calderón, was guarded by a Falange battalion and the former El Sardinero, of Racing de Santander, came to house 20,000 republicans. It was torn down in 1988 and the new stadium was built on adjoining land.

In addition to the bullring and the sports facility, in the Cantabrian city there was also a concentration camp located in the stables of the Palacio de la Magdalena, which is now the student residence of the Menéndez Pelayo International University (UIMP). Also the University of Deusto, in Bilbao, or educational centers such as the Nuestra Señora de la Antigua, in Orduña (Lugo), the Miguel de Unamuno in Madrid or the IES Marqués de Manzanedo (Santoña) were fields that today are used for educational. The latter was opened by Italian troops and was open for two years, but there is no sign to recognize it.

Neither in almost a dozen military compounds does anything recall the thousands of republicans who passed through the camps they housed, including the headquarters of the General Military Academy of Zaragoza, which had been closed in the Republic, or the military base of the Army of Land of Cerro Murciano (Córdoba). Churches and monasteries in Tíjola (Almería), Celorio (Asturias) or the convent schools of the Franciscan Fathers of Lucena (Córdoba) were also used by the dictatorship for this repressive purpose. Some house religious communities, such as the monasteries of San Pedro de Sardinia, in Burgos, and Santa María de Huerta (Soria), where Cistercian monks live.

"Every day thousands of Spaniards pass in front of buildings or enter places that were used as camps, in which thousands of prisoners were locked up who suffered horrors and even many died. It is shameful and has no comparison in the world," laments the journalist Carlos Hernández, who claims that their signage is "essential". "It is necessary both to inform the public and to pay tribute to those who suffered there, with whom we owe a debt because if they ended up there it was for defending democracy and freedom." They suffered physical and psychological torture and ideological repression: they had to take communion, go to mass, or sing the Cara al Sol daily, Hernández has documented.

With the aim of advancing in their identification, the PSOE has registered an initiative in the Senate that urges the Government to promote the necessary measures in collaboration with the rest of the administrations to signal those that are still standing. The objective is that these spaces that "coexist in our day to day" and through which "thousands of people pass without knowing their terrible history" are identified, says the text.

The proposal has not yet been debated, but the Executive has picked up the glove and will raise it at the next meeting with the communities. Fernando Martínez, Secretary of State for Democratic Memory, is confident that the Memory Law will go ahead this legislature, but "until it is approved", the Government's idea is that "the visibility" of the fields becomes "in a priority line.

Signposted enclosures are a minority. The last one was that of San Marcos, in León, that houses a parador, and that after complaints from the victims and memorial groups, today has an information plaque and another one in homage to the prisoners inside the building. In the one in Miranda de Ebro (Burgos), which was the one that lasted the longest, until 1947, there are informative posters indicating the conserved remains of the field, while in the monastery of Santa María, in Oya (Pontevedra), the gratifis that the prisoners drew on the walls and have been exhibited.

For Hernández, the PSOE initiative is "necessary", but "it will be more important for the government to comply with it." It is an outstanding debt, he assures him. "Francoism tried to erase the traces of its crimes for 40 years and one of the most atrocious tests was the fields". However, it was not resolved with the arrival of democracy, which "imposed a cloak of silence that allowed the executioners to go unpunished and the victims to be forgotten," says Hernández. The investigation and visibility of this dark chapter of history is very recent, but even today there are those who deny that the concentration camps were real, regrets the journalist. "That despite the fact that the dictatorship itself called them that in its official documents, because they were one more leg of the repressive system."

Maps made by Victoria Oliveres. Source: research by Carlos Hernández reflected in the book Franco's concentration camps and the Web page namesake.