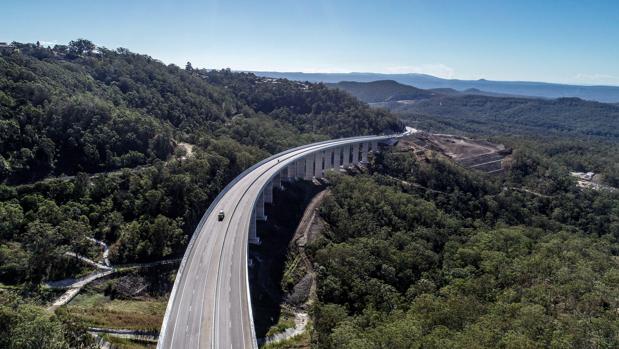 The company is present in the DJSI world and European indexes for the eighteenth consecutive year. In this edition, four companies have been included in the world index of this sector, while the European one is made up of only three. This selection supports the company's strength in environmental, social and economic performance. Especially noteworthy is the performance in the environmental dimension, where Ferrovial obtains the highest score in its sector, reaching the highest possible score in Materiality, Eco-efficiency and Climate Strategy, among other indicators.

NTE 3C, 4th Managed Lanes, Texas
This past summer, Ferrovial was awarded the construction and operation of the new North Tarrant Express highway extension in Texas for 813 million euros. It is the fourth Managed Lanes project that Cintra manages in the Dallas-Fort Worth region, one of the most dynamic and fastest growing in the United States. The company already operates in the region the LBJ Express, the North Tarrant Express (NTE) and the NTE 35W, the expansion of the NTE (segments 3A and 3B). Ferrovial Agroman will be responsible for the design and construction of this new section.

The agreement includes action on a 6.7-mile (about 11 km) road section, from Heritage Trace Parkway, north of US 81/287, to Eagle Parkway, in Denton County. The existing lanes will be renewed, which will remain toll-free, and two Managed Lanes toll lanes will be built per direction, in addition to the incorporation lanes. Previous construction work is already underway and the highway is expected to open to traffic at the end of 2023. The concession will end in 2061.

I-77 Highway in North Carolina
The complete inauguration of this highway is expected to occur before the end of the year. Currently 60% of the corridor is in operation. A consortium led by Cintra was awarded in 2014 the design, construction, financing, operation and maintenance of the I-77 highway expansion in North Carolina. The project has a total planned investment of 648 million dollars (around 581 million euros).

A stretch of 41.8 kilometers of the existing highway has been remodeled, adding variable electronic toll lanes ("managed lanes") that will help reduce congestion and improve the operation of the corridor. Cintra is responsible for the development of this project whose design and construction are in charge of a joint venture that includes Ferrovial Agroman and the US construction company W. C. English.

In the first place, the company will be in charge of making two contracts within the expansion project of the Northeast Houston Drinking Water Treatment Plant. On the one hand, PLW Waterworks will install more than 37,000 linear meters of underground pipes and, on the other, it will execute the new treated water pumping station, with a capacity of 1.21 million cubic meters per day.

These works in the state of Texas reach a joint value of 192 million dollars (169 million euros) and are expected to be completed in 2024. The expansion of the Northeast Houston Drinking Water Treatment Plant is the largest project «Design and Construction »of its sector that is being carried out in the United States. When completed, the plant will serve more than two million people.

And secondly, PLW Waterworks will also build a surface water treatment plant in the city of Pearland, located south of Houston, for 120 million dollars, equivalent to 105 million euros. The plant, which will serve 75,000 people, is expected to be completed in 2023.

Inauguration of the Toowoomba beltway, Australia (1,100 million euros)
In July 2015, the Nexus consortium, led by Cintra, was selected for the design, construction, financing, operation and maintenance of the Toowoomba beltway, the largest highway project in the state of Queensland. The financial closing occurred in August of the same year. The design and construction has been in charge of a consortium of which Ferrovial Agroman was part. Likewise, Broadspectrum will be responsible for its operation and maintenance.

The infrastructure set up by Nexust has a length of 41 kilometers and will improve the traffic conditions of the region, by reducing the circulation of heavy vehicles through the city center. The concession has a duration of 25 years. The first section of the Toowoomba ring road was inaugurated in December last year. This highway crosses the “Great Dividing Range” mountain range that runs parallel to the east coast of the country along 3,700 kilometers.

The users of the beltway will save 500 meters of unevenness between the connection points with maximum slopes limited to 6.5%, avoiding the unevenness of 10% and the traffic lights of the current highway, which crossed the city. Toowoomba was the first highway concession contract that Ferrovial was awarded in Australia. . (tagsToTranslate) publirreportaje (t) ferrovial (t) sustainability