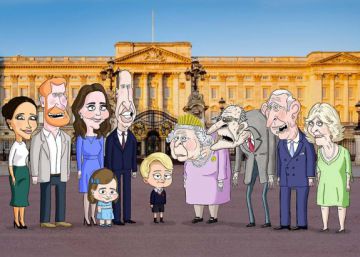 In full wave of headlines on the British royal house caused by the announcement of secession of Meghan Markle and Henry of England and his desire to gradually achieve “economic independence”, the platforms are turning to devising new products with the family as the protagonist. Netflix, HBO, Disney, Apple TV … As if it were a plot of Game of Thrones, The war for the Windsor begins.

HBO Max, which will start operating in May in the United States, has announced this week a satirical animation series. Will be called The prince and his story will be told from the point of view of Prince George, the six-year-old son of Kate Middleton and William of England, who is blamed for a manipulative and capricious personality, as a diva of the show. The idea comes from the cartoons that Gary Janetti, screenwriter of Family Guy, publish in an Instagram account, which has more than 900,000 followers. Janetti will also give voice to the son of the Dukes of Cambridge, Orlando Bloom will be Henry of England and Iwan Rheon (Ramsay Bolton in Game of Thrones), prince william

Ironically, the series will follow Prince George “through the 775 rooms of Buckingham Palace, among the pile of corgis that accompany his family, and the elementary school with commoners,” according to the project leaders. Through “the eyes of young Prince George,” the series will present personalities such as “his modern aunt Meghan and uncle Enrique,” the chain said in a statement. The prince It has no release date.

The royal family is already accustomed to television reflecting it with humor. The Windsors, which premiered in the United Kingdom in 2016 on Channel 4 and in Spain is available on Netflix, shows the members of the British crown with in markedly more absurd stories. Kate Middleton has gypsy origin and contracts Ebola; Guillermo works as a waiter in a local kebabs and Camilla decides to become pregnant with 68 years so that his son is the heir.

Even without a project on the table, Netflix has confirmed that it persecutes the Dukes of Sussex to do “something.” Literally, anything. “Who would not be interested?” Ted Sarandos, content director of the platform, told the British newspaper The guardian. Netflix is ​​worldwide associated with the British royal family, and in particular by the figure of Isabel II, for the success of The crown, the series about the reign of the monarch. But now all the interest of the house is in signing the very protagonists: Henry of England, who, if he accepts, would debut as an actor, and Markle, who is already an actress.

Prince Enrique already collaborated last year with Apple TV in a documentary about mental health and well-being with his wife and Oprah Winfrey. In addition, Markle, who became known as an actress with the series Suits, has signed an agreement to lend its voice to a Disney project still without a title, in exchange for an important donation to an organization that protects elephants, the British newspaper revealed this month The times. In the war of streaming, the new battle is for Enrique and Meghan.