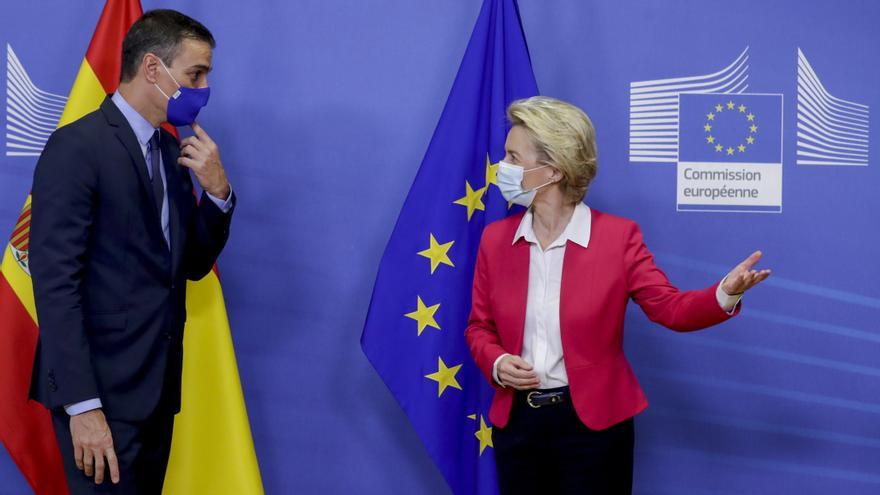 The government’s budget plans have received this Wednesday, like those of the rest of the eurozone partners, the support of Brussels. The document was delivered a month ago to the European Commission and now the opinions of the Community Executive on each Member State are published within the analysis of the European Semester – the European Commission’s economic governance mechanism – within the autumn package of the Community Executive. “The opinions take into account the current health crisis, the high level of uncertainty and the severe economic recession resulting from the COVID-19 outbreak,” explains Brussels. Of course, the European Commission also warns of growing imbalances, especially in debt, which is on its way to 120% of GDP, as well as unemployment, which may exceed 17% in 2021; and it affirms that its calculations of income with the new taxes announced by the Government are less optimistic.

In the case of Spain, the Commissioner for Finance of the European Commission, who signed the document, “considers that the Draft Budget Plan of Spain is in global compliance with the recommendation adopted by the Council on July 20, 2020 [en el que no había objetivos cuantitativos por la crisis de la pandemia]. Most of the measures established in the Draft Budget Plan support economic activity in the context of considerable uncertainty. ”

“Given the level of public debt in Spain and the high medium-term sustainability challenges before the outbreak of the pandemic,” continues Brussels, “it is important for Spain to ensure that, by taking supportive budgetary measures, sustainability is maintained. medium-term fiscal “.

In this sense, the Community Executive “invites Spain to periodically review the use, effectiveness and adequacy of support measures and be prepared to adapt them, as necessary, to changing circumstances.”

The European Commission has concluded that “all plans are broadly in line with the recommendations” of the summer European Council. “Most of the measures support economic activity in a context of considerable uncertainty,” acknowledges Brussels. “Some measures of the draft budget plans of France, Italy, Lithuania and Slovakia do not appear to be temporary or to be accompanied by compensatory measures,” says the European Commission, while Lithuania has presented its draft based on a scenario without new budgets, for what is being asked for an updated plan.

“For Austria, Belgium, Cyprus, Estonia, Finland, Germany, Greece, Ireland, Latvia, Luxembourg, Malta, the Netherlands, Portugal, Slovenia and Spain, the measures are (mostly) temporary,” says Brussels, adding: “For Belgium, France, Greece, Italy, Portugal and Spain, given the level of their public debt and the high sustainability challenges in the medium term before the outbreak of the COVID-19 pandemic, it is important to ensure that, when taking budgetary measures of support, the fiscal sustainability is preserved in the medium term “.

In February 2020, the European Commission concluded that Spain “was experiencing macroeconomic imbalances, in particular related to high external and internal debt, both in the public and private sectors, in a context of high unemployment. The net international investment position, the public debt, the unemployment rate and the indicators of the activity rate exceeded the Community thresholds “.

According to the European Commission, “Household debt is above the fundamental and prudential thresholds, and an increase in unemployment could reduce repayment capacity. Both corporate and household debt are expected relative to GDP will increase in 2020, largely due to the decline in GDP from COVID-19. ”

In addition, the Community Executive foresees that the ratio between public debt and GDP, already high, will increase by about 25 percentage points in 2020, up to 120% of GDP and that, in general, it will remain at this level in 2021.

As for the banking sector, “it has strong liquidity and is adequately capitalized, while profitability is moderate. NPLs have decreased to 3% in 2019, but are likely to increase with the COVID-19 crisis.”

Similarly, “the labor market continued to improve in 2019, although unemployment and labor market segmentation remained a concern. The unemployment rate is projected to rise to almost 17% in 2020 and then rise slightly more in 2021 The activity rate decreased slightly between 2016 and 2019, in part due to the fact that more people are studying “, states the European Commission:” Spain entered the COVID-19 crisis with vulnerabilities linked to external debt, the private sector and public debt and high unemployment. With the COVID-19 crisis, debt ratios and unemployment have been on the rise. Overall, the European Commission considers it appropriate, also considering the identification of imbalances last February, to further examine the persistence of imbalances or their correction “.

“The current crisis has exacerbated certain existing challenges and presents new risks. This highlights the need to make the best use of available EU support measures and ensure that investments and reforms in the euro area work to tackling imbalances “, says the European Commission.

In relation to the follow-up reports after the excessive deficit program inherited from the previous crisis for Spain, Portugal, Cyprus and Ireland, “in the case of Spain, the support schemes of the Spanish and European authorities have mitigated the strong economic impact pandemic and credit risks. However, challenges for the real economy and the financial sector have increased. Recent debt auctions have reflected continued market confidence in Spain’s economy and sovereign debt despite the outbreak of coronavirus “.