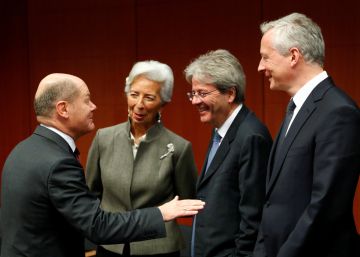 The European Union is faced with a stage of economic anemia just when it faces major challenges. Brussels wants to mobilize huge public and private investments to combat climate change or face the digital transition. However, public investment has been at the lowest levels for three years since the creation of the euro. Commissioner Paolo Gentiloni warned that this scenario “is not consistent” with the European Commission’s strategy. Despite the misgivings of Berlin and the northern countries, the Community Executive looking for the tax rules reform that just opened Protect investments.

Brussels has decided to open the thorny debate of fiscal rules that seek to ensure that countries meet the sacrosanct limit of 3% in the public deficit and 60% in debt. No country is comfortable with the current framework: for some, it is a corset that prevents them from investing; for others, a framework that is too flexible; For all, a gibberish complex. The new economics commissioner, however, has set its reform as a challenge. Before the European Parliament, Paolo Gentiloni pointed out the two key words: “investment and simplification”. France and Italy support changing the rules to ensure green investments, while the northern countries, with Holland at the top, distrust those plans.

The communication approved by the European Commission at the beginning of the month indicates that the current fiscal rules lead to “macroeconomic stability and debt sustainability”, which considers “necessary conditions” to mobilize public and private capital. The report also points out that academic research has so far not concluded that fiscal rules have “damaged public investment.”

However, that document also contains a devastating fact. According to the latest available statistics, of 2017, public investment in the EU is equivalent to 2.7% of GDP. It is lower by one percentage point than in 2009. That year, EU partners tried to prevent their economies from bleeding with public spending. And except for 2009, during the first decade of the millennium, investment remained above 3% of GDP. When austerity was imposed as a solution, States applied a snip in that chapter.

In Strasbourg, Gentiloni did include the investment cut as a failure of fiscal rules. “We have been reducing our public investment, which is not at the level it was 20 years ago,” said the commissioner. Brussels believes that the mobilization of public capital will be key in the next decade for three reasons: to prevent the current period of atony from being prolonged, to encourage green and innovation spending and to close the gap with the United States and China in key sectors for the continent.

Gentiloni recalled that many analysts warn that the euro zone can get caught in a stage of “low growth, low inflation and low interest rates.” “It is not consistent with the strategy for the ecological and digital transition,” he insisted. A report by the European Investment Bank (EIB) warned that the community bloc runs the risk of “losing ground in innovation” and urged to dedicate 140,000 million annually to achieve the objective of allocating 3% of GDP to that area.

Brussels has so far proposed to mobilize over a billion euros in the next decade to fight climate change and 200,000 million for artificial intelligence. These resources must come from the EU Budget, which Berlin or The Hague wants to lose weight, but also from the EIB or national accounts. Therefore, the Commission wants to preserve public investment. The maximum is, for now, to give countries flexibility within the rules. But Gentiloni wants to shield space in the revision of the rules to invest.

The Commission has opened a consultation period before putting a proposal on the table. One of the reference documents for that debate ands who developed the EU Tax Advisory Council last September. It proposed a simplification of the rules and the so-called “golden rule”, consisting of subtracting the expenditure on strategic investments for the purpose of calculating the deficit for Brussels.

Community sources insist that the principles of the Stability and Growth Pact – the maximum deficit of 3% of GDP and 60% debt – are not on the table and ask for caution. Executive Vice President Valdis Dombrovskis and Gentiloni himself led the debate to the meetings of finance ministers last week.

Since the Commission announced that it would open the melon, Italy has been leading the countries that demand more flexibility. Its finance minister, Roberto Gualtieri, insisted on the last Eurogroup on the need to “guarantee a favorable treatment of investments”. The Italian was joined by his French counterpart, Bruno Le Maire, who also warned that “the level of growth of the EU is insufficient to guarantee” the necessary expenditure for the challenges facing the continent. Therefore, he requested that “budget flexibility” be given to countries that allocate resources to the ecological transition within the revision of the rules. Diplomatic sources explained, however, that the Netherlands rejects that this reform leads to more flexible rules.

The researcher of think tank Bruegel Grégory Claeys welcomes the inclusion of the golden rule, but “subject to conditions.” “It would be a question of protecting investment when countries are in recession, for which it could be established that this rule could be used when a country, for example, finds growth below potential,” he says.

More skeptical is the analyst and former secretary of the Italian Treasury, Lorenzo Codogno, who believes that he must separate between what “must be done” and “what will be done.” “There is little appetite in Europe to allow any kind of gold rule for public investment or green investment,” says Codogno, who is in favor of seeking more flexibility to protect that expense, but not if this is an excuse to break the rules.

The revision of the fiscal rules has revealed the obstacles that have been encountered by the countries of the European Union and the Community Executive itself in its execution. Commissioner Paolo Gentiloni presented two before the European Chamber: they have not helped reduce high fiscal surpluses in some States to promote investment – as in Germany or the Netherlands – or have been procyclical.

In addition, the Fiscal Advisory Council has already stated that there are doubts about whether community norms are useful for States to improve the quality of their spending – that is, dedicate more to productive purposes – and whether indicators such as the structural deficit – that is, the lag in public accounts regardless of the business cycle – it is the best method to control the financial health of public coffers.

The Netherlands and other defenders of fiscal discipline are by a simplification of the rules. Spain too. Sources from the Ministry of Economy explained that they prefer an expenditure rule and see the evolution of the debt rather than continuing to control “unobservable variables”, that is, that result from a mathematical calculation. Within the Eurogroup there is a certain consensus in that direction. There is none, however, in the demand for more flexibility from Italy or France or the hardest hand from Holland.

Now, to decipher the fiscal rules a vademecum of more than a hundred pages is necessary. “It would be necessary to make them simpler so that they did not rest on variables such as the structural deficit and others that nobody has just understood,” says Bruegel researcher Grégory Claeys.