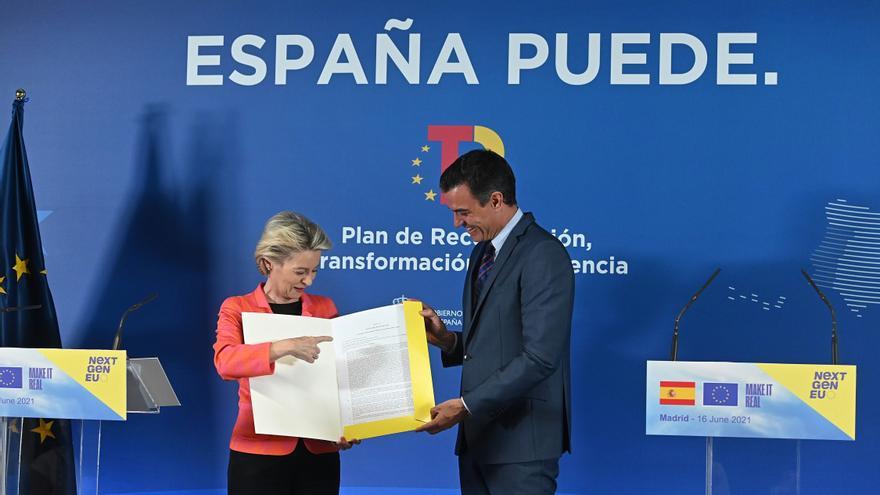 Spain has already explained its control mechanisms before its recovery plans are approved, recalls the Community Executive. It was in April, when the Spanish plan received 10 outstanding and a notable. Thereafter, it received 9,000 million in pre-financing. Then, in November, it signed operating provisions for the first section. And at the end of December Brussels disbursed another 10,000 million euros. In total, the European Commission, which also indicates the existence of community systems to control the proper use of European funds, has already transferred 19,000 million euros of recovery funds to Spain. And it has done it before any other country.

After trying to boycott European funds in Brussels, the PP is now launching an offensive against the distribution that the Government is carrying out of the money between the different administrations. The battle will be given in the courts, to which they have already gone PP regional governmentsand also on a political level. The conservative mayors want the Spanish Federation of Municipalities and Provinces (FEMP) to position itself against the Executive, as it has already done at other times during the pandemic. In Moncloa, for their part, they reject the claims of partisanship and recall that the award responds to criteria established in the sectoral conferences, where all the communities are represented.

The community spokesperson for economic affairs, Veerle Nuyts, was asked this Friday about the complaint by the Madrid regional president, Isabel Díaz Ayuso, and its implications for the implementation of the Spanish recovery plan. “We don’t comment on these specific issues, which are national in nature, but I think it’s very important to remember that the Recovery and Resilience Fund requires a monitoring framework that is tailored and proportionate to its unique nature as a goal-based program. “.

Thus, Nuyts has pointed out that “the national control systems of the Member States will be the main instrument to safeguard the financial interests of the Union, and the Member States must guarantee compliance with national and Union laws, including prevention, effective detection and correction of conflicts of interest, corruption and fraud, and double financing. Member States must explain, and Spain explained in its Recovery and Resilience Plan, the relevant provisions to achieve precisely that. Although we did not comment on a possible impact of this procedure [el de Ayuso ante el Supremo] in implementation [del plan], we want to remind you that the Commission expects the Spanish plan to be implemented as agreed”.

The community spokesperson also explained that “whenever there is a request for payment”, such as the one presented by Spain in November, “the Member States must sign a declaration that the funds were actually used for the intended purpose”.

Likewise, Nuyts recalled, “the Commission will also put in place its own control system, with the possibility of carrying out verifications on the spot, for example, to really make sure that the funds were used properly”.

“In any case”, he insisted, “OLAF is also [agencia europea antifraude], the Court of Auditors, the European Public Prosecutor’s Office and the European Commission itself, which can access relevant data and investigate the use of funds if necessary, and even if milestones and objectives have been met”.

In this sense, if the European Commission finds “serious irregularities and the Member State does not take the timely and appropriate measures to correct them and recover the corresponding funds, the Commission may also take measures.”

The Government does not expect questions from its partners

This Monday and Tuesday there is the Eurogroup and Ecofin in Brussels, where it will meet with its community partners, and the Spanish Government recalls the statements of the economic vice-president herself, Nadia Calviño, on “the importance of the existence of institutional mechanisms within the plan itself that ensure the correct use of the funds, a plan that has already been approved by the European Commission itself”.

In this sense, the Executive does not expect “any type of problem related to this matter” in the economic meetings next week in Brussels.