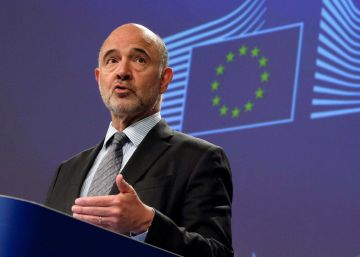 Spain will grow again this year above the euro zone. And despite political uncertainties, internal and external, it will do so with more force than expected by Brussels. The good start of the year due to the contribution of exports has led the European Commission to raise its growth forecasts for Spain compared to those prepared in May. Brussels now considers that the Spanish Gross Domestic Product (GDP) advance 2.3% this year (instead of 2.1%) and 1.9% next. In an environment of anemic inflation that worries the Commission, the outlook for the euro area as a whole is going through an improvement of 1.2% this year and 1.4% (one tenth less) next.

The Commission is, once again, prudent with its forecasts. Far from clearing up, political and commercial tensions have continued to escalate. To the protectionist policies of Donald Trump and his confrontation with China, which have ended up affecting the European industry, is added the instability in the Middle East, which Brussels believes could lead to an increase in the price of oil. Within the borders of the EU, the divorce of the United Kingdom has still not been resolved. And the lack of confidence of the entrepreneurs and the signs of exhaustion of the industry could expand to other sectors, eroding the labor market, private consumption and growth.

Despite all this, the euro zone lives its seventh year of growth with all its economies with positive numbers. Spain will once again be the first of the major economies to move forward. Although the European Commission at first was suspicious of wage increases, mainly derived from the increase in the minimum wage, now it affirms that these (together with the reduction of unemployment, although it will decelerate) "could support the increase in disposable income "And" a higher rate of household savings ". For now, Spain has started the year with data "stronger than expected", with an advance of 0.7% in the first quarter. Brussels expects to close the months between April and June with an increase of 0.6% of GDP and in the two following quarters to grow by 0.5%.

The flip side of the coin is Italy. The fiscal expansion measures of the Government of Giuseppe Conte, corrected at the request of Brussels, will not make the economy of the country lift the flight. This year, according to the European Commission, will remain virtually stagnant at 0.1% and next year will rise to 0.7%. But the gap with the whole of the euro zone and especially with other economies of its environment will continue to grow in a country that has not yet managed to recover the levels of wealth before the Great Recession. Similarly, the weakness of the industrial sector will take its toll on Germany, which in 2019 will advance only 0.5% and in 2020 it will increase by 1.4% (one tenth less than expected in May), while France will grow similarly the next 18 months: 1.3% this year and 1.4% next.

The geopolitical tensions in the Middle East, which may mean a rise in the price of crude, are the only threat to inflation that will be lower than expected: 1.3% in the euro zone for the next two years. The data shows that, although Europe continues to grow, it does so weaker. "The reduction in inflation expectations is a source of concern," admits Brussels.