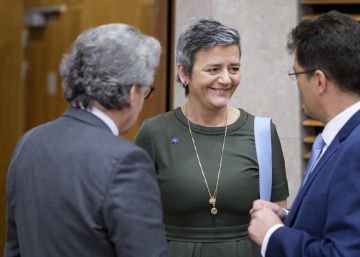 Vice President Margrethe Vestager and Commissioner Tierry Breton They will present today the so-called EU Digital Package, a set of measures that aims at a strategy to strengthen digital services, exploit non-personal data to create greater economic benefit and develop artificial intelligence in an ethical, safe and responsible manner.

This presentation constitutes the first major milestone of this new European Commission within the scope of one of its six major political priorities set by the President of the European Commission, Ursula von der Leyen. The European Commission will approve the two documents that will cement the Twenty-seven strategy on the digital agenda and data management for not being left off the United States and China. The Community Executive wants Europe to make the leap with more funding, training and talent. However, it will propose to regulate the application of artificial intelligence in sensitive sectors such as health, transport or justice.

This will not be the only draft meeting in the regulation of the technology industry. The US Department of Justice will also hold a public meeting this February 19 to discuss the future of a federal law that can envisage greatly exempt online platforms such as Facebook from legal responsibility for the content published by its users, according to Reuters reported today.

Specifically, the institution will examine the future of Section 230 of the Communications Decency Law, which grants immunity to companies such as Facebook, Google and Twitter for the content published by users, although companies may remain responsible for the content. that violates the criminal or intellectual property law.

It happens that this Monday, the president of Facebook, Mark Zuckerberg, met with high community charges. The European Commission once again demanded from the employer an “extra effort to help defend” democracies in the face of campaigns of misinformation or foreign interference. In this same meeting, the EU rejected the proposal to regulate the digital content of the technology giant; and has warned him that he must make more efforts on the illegal material of his platforms.

What was this document? Zuckerberg proposed that the regulation on the contents of its platform must be global, and not national. Facebook founder believes that digital companies must respond on the systems they have in place to fight against illegal content, but that they should be offered some flexibility. “Is not sufficient. It’s too slow. And it is too low in terms of responsibility and regulation, ”said Internal Market Commissioner Thierry Breton, in statements collected by the Efe agency.

The European hard hand has its contrast from the other side of the Atlantic. The US Department of Justice will hold a meeting titled significantly Section 230 – Foster innovation or promote accountability. Republican and Democratic party lawmakers have asked Congress to change this Section 230 so that it can expose technology companies to more demands or significantly increase their costs, according to Reuters.

Some Republicans have expressed concern about the fact that Section 230 prevents them from taking action against Internet services that eliminate conservative political content, while a few Democratic leaders have said the law allows services to escape punishment for housing. erroneous information and extremist content.