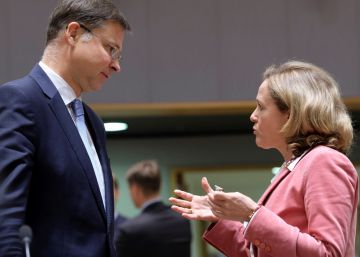 The economic vice president Nadia Calviño has transferred this Monday to the European Commission that the new coalition government works in a new “realistic and credible” path of deficit reduction for the next few years. In full confirmation of the trend of economic slowdown, Calviño said that the pace of deficit and debt reduction must be “compatible” with growth and job creation. Brussels replied that there is room for flexibility, but without excess. “Naturally, we must observe the consequences of the public spending plan, but the first contact with Nadia Calviño has been very positive,” said Economy Commissioner Paolo Gentiloni.

New year, old purposes. When the euro zone economies continue to settle in a zone of low growth and inflation, Spain seeks in Brussels the formula to increase public spending and at the same time continue to reduce the deficit. Knowing that any new income measure included in the Budgets will have an already limited impact this year. and after the Brussels warnings of the risk of deviation from the current objectives, Spain has no choice but to seek margin in Brussels. Calviño had to explain the policies of the new government to its Eurogroup partners.

And he took the opportunity to meet with Vice Presidents Margrethe Vestager and Valdis Dombrovskis and Commissioner Gentiloni. These were the first contacts of a “constant dialogue” that, according to Calviño said upon arrival at the Eurogroup, “will intensify in the coming weeks.” Vice president try to develop a new path of deficit and debt. He did it already in the summer of 2018, when he said that he had started the flexibility of the objectives. In Brussels, nobody confirmed it, but nobody denied it either. In fact, the highest priority was for Spain to cease to be under its guardianship and could approve public accounts and a reform program to reduce the structural deficit, that is, that which is foreign to the economic cycle.

Commitment to the rules

“The Commission is very satisfied with the fact that we finally have a government in Spain with a budgetary power,” said Commissioner Gentiloni, who still warned that Brussels should examine the consequences of the public spending plan implied by the coalition agreement between the PSOE and United We Can. This is what will happen in the coming weeks. The technicians from Brussels and Madrid will exchange roles, while the policy makers must agree on how far to go. Calviño, which for the Commission is the guarantee of fiscal discipline in Spain, said what the limit will be, also in Madrid: “The Spanish government has a clear commitment to community rules.”

That is to say, Calviño will not leave the Stability and Growth Pact, but neither will it remain with the path of reduction of the current deficit, which is that of the 2018 Budgets after the first Executive of Pedro Sánchez could not change it in the accounts for last year, they didn’t get ahead. “Now we have to prepare and work on a path that is credible and realistic and allows us to achieve that budget balance in the coming years,” he added.

“The community rules have certain elements of flexibility within which we will have to find that right balance,” said Calviño, who promised to take some accounts to Brussels “as soon as possible.” According to sources from the Ministry of Economy, the minister seeks to speed up the certain compromise of the two years of grace that Spain has after having left the excessive deficit procedure. “There is always flexibility,” said Gentiloni, who in two weeks will open the melon on fiscal rules with the Nineteen completely divided.

Spain rejects the distribution of money proposed by the European Commission for the Fair Transition Fund, which seeks to allocate funds to areas that must be reconverted because of measures to deal with climate change, such as former mining regions. With the current distribution, 307 million of the 7.5 billion that the Commission would allocate would correspond to Spain. “We see it very green but not very fair at the moment,” said Foreign Minister Arancha González Laya. “Spain supports the green fair transition fund very clearly and decisively, but we are a little worried,” he added.

Calviño emphasized that this distribution should be “fair” between countries. The minister is especially concerned about two issues: first, that unfair competition between countries is not encouraged, and second, that states that are not careful in the ecological transition are not rewarded. “It is important that the different mechanisms generate the appropriate incentives, that is, that they do not receive money from countries that may have a lower commitment to this ecological transition,” said the minister. The country that will take the most funds is Poland (2 billion), which continues to resist committing to decarbonize its economy by 2050.