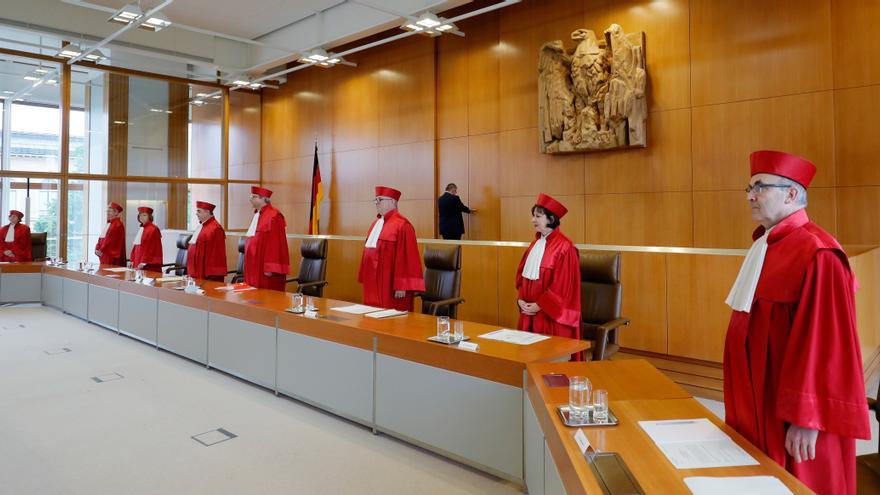 Brussels initiates an infringement procedure and, with this, opens the judicial process against Germany for the rulings of its Constitutional Court against the EU Court and the independence of the ECB. Thus, the European Commission has decided to send a letter of formal notice to Germany for "violation of the fundamental principles of EU law, in particular the principles of autonomy, primacy, effectiveness and uniform application of Union law, as well as respect of the jurisdiction of the Court of Justice of the European Communities under the Treaty on the Functioning of the EU ".

The news was advanced this Tuesday by the German agency DPA, and later confirmed by Europa Press a day before Brussels made the decision public on Wednesday. The Community Executive recalls that on May 5, 2020, "the Federal Constitutional Court of Germany issued a ruling on the Public Sector Procurement Program (PSPP) of the European Central Bank (ECB), in which it declared ultra vires, that is to say, that the ECB exceeded its limits ".

Germany now has two months to respond to the concerns raised by the Commission.

The authoritarian governments of Hungary and Poland systematically challenge the mechanisms of European integration. It goes in his political speech, that's why Viktor Orbán takes pictures with Santiago Abascal and the ruling party in Poland, PiS, is Vox's main European ally.

In fact, it did not take long for the Polish Government to welcome the ruling of the German court that questioned the CJEU: "The Member States are the owners of the EU Treaties, this is what the German Federal Constitutional Court said today. The Germans they defend their sovereignty. The EU has to say as far as the Member States allow it. "

In the same way that Matteo Salvini did when he was the strongman of the Italian Government, or as does his companion in battles, Marine Le Pen: they defend a European Union of States, not a federal or more integrated European Union. And Salvini's pulse wiped out the extreme right of the Lega outside the Italian Government and the deputy prime minister in opposition.

Precisely, the German Constitutional Court struck in May 2020 against two institutions federal Europeans who are fundamental to advance in economic, social and rights integration: the European Central Bank, an important community actor in the response to the coronavirus crisis; and the Court of Justice of the EU, guarantor of equality before the law and watchdog of violations of the rule of law in countries such as Hungary and Poland. And he did so by questioning the legality of the ECB's debt purchase programs launched since 2015 (PSPP), which calls into question the current plan in the face of the coronavirus crisis (the 1.8 trillion of the PEPP).

The European Central Bank, for its part, has defended that its actions were protected "by the judgment of the CJEU of December 2018" and reiterated: "The Governing Council remains fully committed to doing whatever is necessary within its mandate to ensure that inflation rises to levels consistent with its medium-term objective and that the monetary policy action taken to achieve the objective of maintaining price stability is transmitted to all parts of the economy and all jurisdictions in the euro area ".

AfD leader Tino Chrupalla, the German extreme right, was quick to celebrate the ruling: "With today's ruling, the Federal Constitutional Court has put the EU institutions in their place. When the ECB exceeded its powers, the The European Court of Justice approved it. It is good that the German constitutional state is sending a first signal. "

Years ago, Manuel de la Rocha explained in eldiario.es, now director of the Economic Office of Pedro Sánchez in Moncloa, which is at stake in the German Constitutional Court: "With this tragicomedy they remind us who is in charge in Europe, its constitutional court judges our European institutions. An attempt to return to the German Europe that Ulrich Beck fears so much. What underlies this contest are two ways of understanding Europe; the orthodox ordoliberal Germans for whom only the submission to the rules and discipline of the markets will get us out of this crisis, compared to whom we think that the EU is something more than a great financial center, and that solidarity between peoples and citizens is part of European DNA. So far the former have led the way, but the wind of the times is changing. "

The funds, in temporary check

After several weeks in suspense, the German Constitutional Court cleared the way at the end of April for 750,000 million (140,000 million for Spain, between transfers and credits) of European recovery funds. So he decided this Wednesday by rejecting the precautionary measures and allowing the ratification in the federal Parliament of the order of own resources (which allows the European Commission to issue debt to finance the funds), which had been paralyzed at the end of March.

The Karlsruhe-based court, however, did not comment on the substantive issue, which is pending later, although it gives the go-ahead given what is at stake and warns that it may be denied on a future occasion if the case with a new recovery fund, for example.

In any case, the court said that the complaint, among others from the far-right AfD party, is not "unfounded", but understands that blocking the joint debt instrument of the EU (800,000 million at current prices) brings with it more risks than a possible violation of the German Constitution.

"Delaying the entry into force of the 2020 Own Resources Decision would negatively affect the economic policy objective pursued," said the judges: "The resulting consequences could be irreversible and, given that as an instrument of recovery, the NGEU [fondos de recuperación] has the specific objective of addressing the consequences of the COVID-19 pandemic and foresees measures to be taken in a relatively short period of time, delaying the entry into force of the Decision would also put a significant strain on foreign and European relations " .

"On the contrary," the judges continued, "the disadvantages that would arise if the preliminary court order is not issued and the law that ratifies the 2020 Own Resources Decision is declared unconstitutional, have significantly less weight. In this case, The 2020 Own Resources Decision could enter into force once all member states have ratified it, authorizing the European Commission to borrow up to € 750 billion at 2018 prices on capital markets on behalf of the European Union until the year 2026 ".

Therefore, "if it were found in the main proceedings that the 2020 Own Resources Decision amounts to an ultra vires act [de invasión de competencias europeas sobre las alemanas], it seems possible that the Court of Justice of the European Union, upon referral from the Federal Constitutional Court, could declare the 2020 Decision on Own Resources null and void. If the Federal Constitutional Court determines that the 2020 Own Resources Decision constitutes an ultra vires act or declares, contrary to the summary examination in the precautionary measure procedure, that it invades the constitutional identity, it would correspond to the Federal Government, the Bundestag and the Bundesrat to restore constitutional order by all the means at its disposal. "

These are the cheapest hours of electricity this Sunday, June 26

Self-consumption for homes and businesses

The Process 1001: the trial against the labor movement that put Franco's repression under the international spotlight