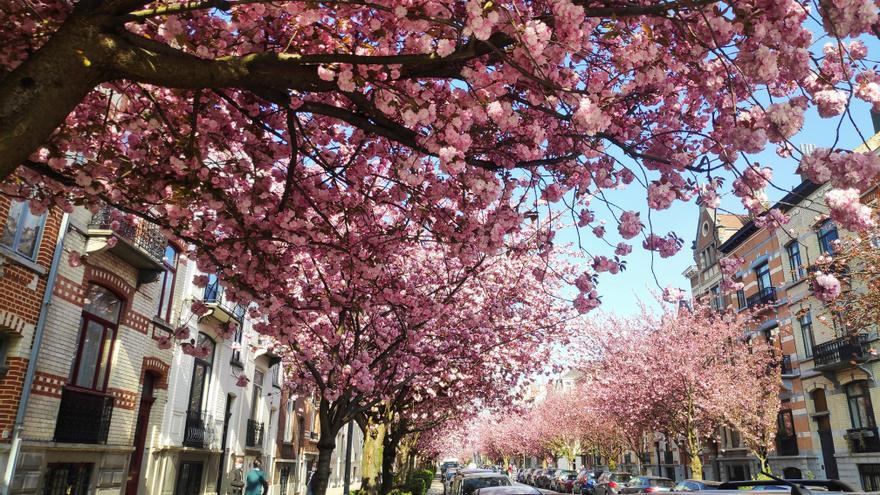 Brussels, Apr 26 (EFE) .- The flowering of Japanese cherry trees, an aesthetic icon of the Japanese country known as “sakura”, these days stains with compact flowers like balls of pink cream many streets of Brussels, and specifically those of the Schaerbeek neighborhood where the singer Jacques Brel was born and the painter René Magritte lived.

Each spring, the spindly and narrow houses of that Brussels commune with a bourgeois tradition dotted with Art Nouveau buildings, the largest in the Belgian capital, show a fleeting spectacle that for a few days attracts locals and strangers to a district adjacent to the European quarter.

According to the literature of the Scharebeek mayor’s office, legend has it that the farmers of that municipality, today inserted in the capital as a whole, obtained back in 1136 permission from the Duke of Brabant to transport their cherries by donkey to the center of Brussels and sell them to the producers of kriek, a sweet beer made from these red berries.

“Here are the Schaerbeek donkeys!” Shouted when the buyers saw them, thus giving rise to a nickname of “the city of donkeys” with which the neighborhood is still known, which is also called the “village of the cherry trees”.

On the last Sunday of June of each year, the residents of the commune proudly celebrate their historical relationship with these trees of the prunus genus and the mayor, accompanied by a donkey, walks around distributing fruits through the beach bars that take place in the parks during the Fiesta de la Cherry.

A little earlier, in mid-spring, Emile Max Avenue, Schaerbeek Station, Diamant Square, Riga Square or Josaphat Park offer a visual spectacle as unusual as it is unknown to the foreign public, generally more familiar with the floral carpets of the Grand Place or the blue blanket of hyacinths in Hal’s forest.

Discreet when they lose their leaves in winter or when they show them green in summer, hundreds of cherry trees of Japanese origin – which do not produce fruits but are highly valued for ornamental uses for their dense flower clusters with pink petals – sublimate a neighborhood that includes some of the oldest and most distinguished specimens on its natural heritage lists.

As the days go by, the petals fall on the sidewalks, creating a soft carpet that pedestrians admire, photograph and share on social networks until the street sweepers move the flowers to the tree pits.

With the streets deserted in that residential district on a pandemic Monday, an old man walking with a mask asks one of those street sweepers not to remove the pink petals from the sidewalks, because he considers that the floral image is so beautiful that it deserves to be enjoyed.

“I have to do it, they pay me to clean the street. But I agree with you, sir,” replies the cleaning worker.