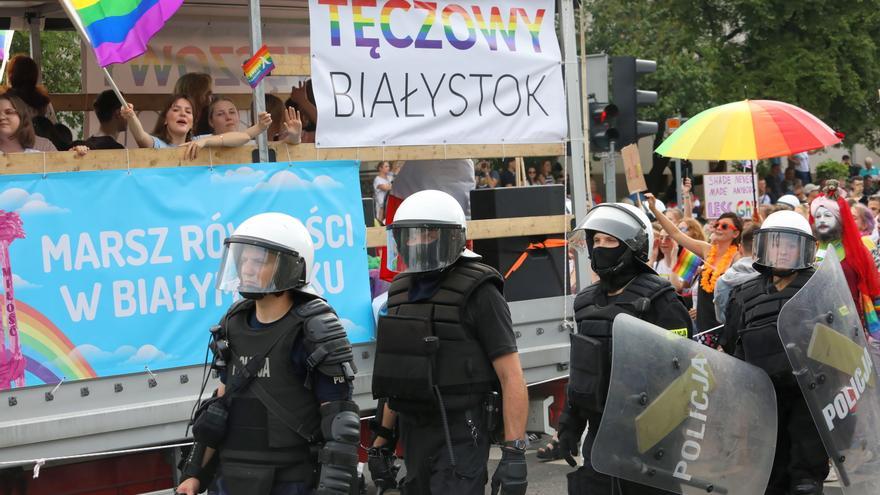 Discrimination on the grounds of sexual orientation, gender identity or expression, and sexual characteristics is increasing in the EU: 43% of LGBT people reported feeling discriminated against in 2019, compared to 37% in 2012. This is confirmed by a survey carried out by the European Union Agency for Fundamental Rights (FRA). And, according to a Recent Eurobarometer on discrimination in the EU46% of respondents said they would not be comfortable (totally or moderately) with an intersex person being elected to the highest political position; 57% said that they would not feel comfortable (totally or moderately) with their children being in a relationship with a trans person; and 62% of intersex people felt discriminated against in at least one area of ​​life in the previous 12 months for being intersex.

In this context, the European Commission has launched its strategy for LGTBIQ equality in the EU on Thursday. “The first in history”, highlighted the Community Vice President for Justice, Consumers and Gender Equality, Věra Jourová: “This is not about ideology, it is about love. It is not a strategy against anyone, it is about Europe 2020, and discrimination and hatred against persons belonging to sexual minorities belong to Europe. ”

“If someone is a father or mother in one country, it is in all EU countries,” said the European Commissioner for Equality, Helena Dalli.

“Everyone in the European Union should be safe and free to be themselves”, states the Community Executive: “In recent decades, legislative advances, jurisprudence and political initiatives have improved the lives of many people and have helped us to build more equitable and welcoming societies, including for lesbian, gay, bisexual, trans, non-binary, intersex and queer people. At the national level, 21 Member States have legally recognized same-sex couples, while four have introduced legal procedures recognition of gender without any medical requirements (Denmark, Ireland, Luxembourg, Malta) Recent research also shows that even when there is greater social acceptance and support for equal rights, it has not always translated into clear improvements in the lives of LGTBIQ people “.

According to the Eurobarometer, 40% indicated ethnic origin or immigration history as an additional reason for discrimination, in addition to being LGTBI; 19% of lesbian, gay, and bisexual people, 35% of trans people, and 32% of intersex people felt discriminated against at work in the past year; and 51% of intersex people and 48% of trans people, 35% of lesbians, and 31% of gay men live in households that have difficulty making ends meet.

The European Commission’s strategy, says Brussels, “is based on a vision of a Europe where people, in all their diversity, are equal, where they are free to continue their lives regardless of their sexual orientation, identity, gender expression or sexual characteristics While Europe has advanced step by step in recent years, this LGTBIQ equality strategy marks a new phase in our efforts to promote equality for lesbian, gay, bisexual, trans, non-binary, intersex and queer people. Furthermore, it emphasizes the need to integrate an LGBTIQ equality perspective into all EU policies, as well as in EU funding programs. ”

“Combating inequality in the EU is a shared responsibility”, states the European Commission, “requires joint efforts and actions at all levels. EU institutions and agencies, Member States, including regional and local authorities, bodies equality, civil society and companies must reinforce their commitment to achieve the objectives of the strategy. All institutions must establish a clear commitment to follow a common strategy “.

According to data from the European Commission, 38% of LGTBI people have experienced harassment motivated by hatred for being LGTBI in the 12 months prior to the survey; and 22% of intersex people have experienced a physical and / or sexual attack for being intersex in the last 5 years-; Only 21% of LGBTI victims of physical or sexual violence motivated by hate in the last 5 years submitted a report to any organization, including policy and equality bodies; and 53% of LGTBI people are almost never or rarely open about being LGTBI.

“Discrimination, violence and hatred against LGTBIQ people go against the fundamental values ​​of the European Union and must be eliminated,” insists the European Commission.

To this end, in the area of ​​discrimination, the European Commission undertakes to propose by 2022 any follow-up legislation for the next report on the application of the Employment Equality Directive, in particular to strengthen the role of employment agencies. equality; ensure adequate protection of vulnerable applicants (including LGTBIQ) in the context of the common European asylum system and its reform; ensure support for LGBTIQ equality in action under the Asylum and Migration Fund; support relevant health research for LGTBIQ people, including trans and intersex communities, through Horizon Europe. In parallel, Brussels will support Member States to ensure legal protection against discrimination on grounds of sexual orientation, gender identity / expression and sexual characteristics in various areas; improve safe and inclusive education for LGTBIQ children and youth; address the specific needs of LGBTIQ applicants for international protection while ensuring safe reception, detention and accommodation conditions; and improve the training of protection agents and interpreters who deal with asylum applications of LGTBIQ persons.

In relation to security, Brussels is committed to presenting an initiative in 2021 to expand the list of “EU crimes” (Article 83 TFEU) to cover hate crimes and hate speech, even when they are directed at people LGTBIQ; provide funding opportunities for initiatives that aim to combat hate crimes, hate speech, violence and harmful practices against LGTBIQ people (‘Citizens, Equality, Rights and Values’ program) and promote the rights of victims crimes, including LGTBIQ people (‘Justice Program); and submit a Recommendation on the prevention of harmful practices against women and girls. On the other hand, the European Commission will support Member States to exchange best practices on protection against hate speech and hate crimes against LGTBIQ people; promote a safe and supportive environment for victims of LGTBIQ crimes; and improve training and capacity building for law enforcement to better identify and record.

In the field of building inclusive societies, the Community Executive affirms that it will “review the 2009 guidelines on free movement in 2022 to reflect the diversity of families and help facilitate the exercise of free movement rights for all families, including rainbow families; propose a horizontal legislative initiative on mutual recognition of paternity between Member States; explore possible measures to support mutual recognition of same-gender partnerships between Member States; provide funding opportunities through the Citizens, equality, rights and values ​​program “. Likewise, Brussels says it will support member states to “put in place accessible gender recognition legislation and procedures; improve the inclusion of trans, non-binary and intersex people in relevant documentation, applications, surveys and processes; implement rigorously the right to free movement and the EU rules on family law “.

Finally, the European Commission commits to “monitor the implementation of EU-funded programs to ensure that they respect the principles of equality and comply with EU law, including the Treaties and the Charter of Fundamental Rights; continue to provide Member States technical assistance and methodological support in the design and implementation of data collection exercises on LGTBIQ people, and will support Member States to develop national plans on LGTBIQ equality “.

From here, the European Commission will periodically supervise the implementation of the actions described in the strategy and will present a mid-term review in 2023.