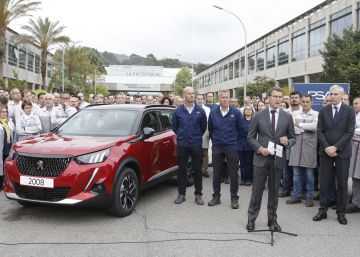 The European Commission calls into question Spain's plan to support Peugeot's investments in its plant in Vigo. Brussels has announced on Monday the opening of an investigation to determine if the 20.7 million euros committed by Spain to the French car company fail to comply with the Community rules on state aid of regional purpose. European laws allow funds to be used to boost private investment, but are subject to strict requirements to prevent countries from harming competition by benefiting some companies more than the rest or favoring certain European regions over others.

"Public investment is important to promote the economic growth of disadvantaged regions in Europe, but we must avoid damaging competition between Member States," said Competition Commissioner Margrethe Vestager. Sources consulted by Grupo PSA, the French group that owns the Peugeot, Citroën and Opel brands, have relativized the relevance of the measure taken by the community government: "It is a usual step in the normal procedure of control of state aid", have pointed out the aforementioned sources, ensuring that it is an opening of consultations so that all interested parties can present "their observations on the compliance or not of the aid".

The community executive have serious doubts about whether Spain has overstepped in the subsidies and, if the inquiries so indicate, will oblige it to cancel the delivery of the funds. The rules say that public money should have, among other things, an incentive effect, be limited to the minimum to achieve the objective of attracting investment, and not cause the company to expressly transfer its production from another point in the European Union equal or more disadvantaged just by receiving the funds.

Spain notified the European Commission in November 2017 of its intention to grant Peugeot assistance. But Brussels believes that irregularities have been committed. Specifically, he has two fears: that the Spanish subsidies have attracted the project from a more disadvantaged region of another European country, and that Peugeot had made the investment in Vigo without the need to grant public aid. In addition, it is not convinced that they contribute to regional development, be proportional or encourage innovation.

Vestager has echoed those concerns. "The Commission will thoroughly investigate whether the planned aid from Spain is really necessary for Peugeot to invest in truly innovative production processes in Vigo and whether they will develop the region without unduly distorting competition or undermining cohesion in the EU," has warned.

Less than two weeks ago, the company announced, in the presence of the president of the Xunta, Alberto Núñez Feijoo, which will manufacture at its plant in Vigo an electric vehicle that will be marketed throughout Europe. It is the latest model that opens the plant after the group committed to invest 640 million euros between 2016 and 2020 to adapt the facilities to the arrival of two new models. The first is a commercial vehicle for the three brands of the group and the second is an SUV that will be released next year and that will also have an electric version.

In the European Commission there is concern about the possibility that the aid from Spain will contribute to distort the market by reducing its normal operating costs, while its local competitors must incur similar expenses by themselves.

The procedure initiated by the European Commission poses a threat to a sector that does not go through its best situation, affected by the fall in sales throughout the continent that will reduce production in most of the plants and an environment of technological transformation. The main European brands complete their assault on the market of electric vehicles by the hand of a large investment to develop them and to prepare the factories. It does so with the fear of having to assume multimillion-dollar sanctions after 2021, when they will have to face the new limits of polluting emissions set by the European Union.