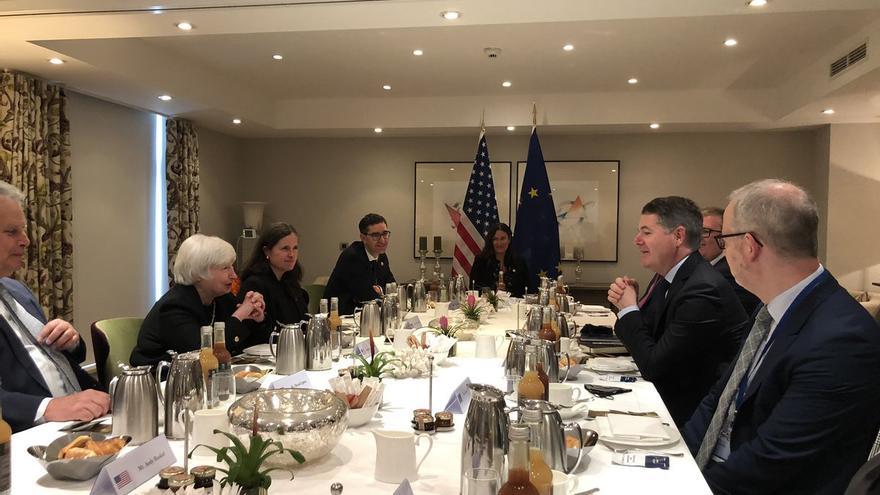 It has been one of the great sources of tension between Washington and the European Union. And it was also one of the collection instruments that the EU had for the coming years. But for now, the digital tax goes into the freezer “until autumn” after the agreement this weekend in the G20 for a global minimum tax of 15% for large companies and waiting for how the debates in the OECD develop.

“The G20 has approved a historic agreement this weekend in Venice to create a more stable and fairer international tax system that addresses the fiscal challenges arising from the digitization of the economy,” said Daniel Ferrie, spokesman for the European Commission, the same day that Janet Yellen, US Treasury secretary, is in the EU capital to attend the Eurogroup meeting.

According to Brussels, the G20 agreement has been “extraordinary” after “years of negotiations, and for which the Commission has worked tirelessly”.

The G20 has called for outstanding issues to be addressed “expeditiously and a detailed implementation plan defined by October. The completion of this process will require a final effort from all parties, and the European Commission is committed to concentrating on that effort. For this reason, we have decided to suspend our work on a proposal for a digital rate as a new EU own resource during this period. ”

The world’s largest economies supported last Saturday a global tax reform agreement that would impose a minimum tax (15%) on multinational companies. The agreement supports the taxation mechanism for multinationals agreed on July 1 by 130 countries and jurisdictions of the 139 that are part of the so-called inclusive framework of the OECD.

“The G20 countries have agreed here that they want to tackle a new international tax order,” Scholz said in statements to accredited media in Venice.

In a statement, the organizers of the meeting of the richest countries pointed out that it is “a historic agreement on a more stable and fair international tax architecture” and the G20 invited “all the members of the OECD … who have not yet joined attached to the agreement to do so. ” It also calls on all countries participating in the negotiations to “quickly address outstanding issues and finalize design elements” before the next G20 meeting in October.

The agreement consists of setting a minimum corporate tax of 15% on profits and that companies have to tax their profits in the countries where they do business.

The finance ministers and governors of the G20 central banks have met for two days in Venice and have reached a political agreement to support this system, which will try to prevent multinationals from evading taxes or diverting their profits to tax havens.

Spain has supported in the G20 the agreement reached within the framework of the OECD to move towards a fairer and more sustainable tax system, in a meeting marked by economic recovery and work to strengthen multilateral economic cooperation in the face of new global challenges, according to the Ministry of Economic Affairs explained in a statement.