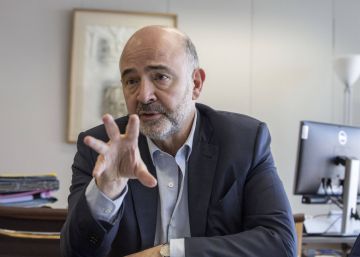 The economic slowdown continues to give Europe no respite. The uncertainties that continue to slow the growth of the EU force again to lower their outlook for this year. Spain is no stranger to this cooling and the Community Executive believes that it will close the year with a GDP increase of 1.9%, four tenths less than in the forecasts published in July. The same cut contemplates for 2020, when Spain would grow 1.5%. Brussels also estimates that the deficit will be 2.3% instead of the 2% provided by the Government, according to diplomatic sources.

The finance ministers of the euro zone will meet this Thursday in Brussels with the new forecast document prepared by the European Commission on the table. And only one day after the International Monetary Fund (IMF) called on the euro countries to prepare contingency plans in case the economy ends up falling apart because of a resurgence of trade wars that are waged from across the Atlantic or if Brexit ends up derailing.

The Government estimated in the macroeconomic chart that it sent to Brussels last October that economic growth would be 2.1% this year and 1.9% next year, one tenth less than the initial forecast. And it maintained its deficit target at 2% of GDP, from 2.5% at the end of 2018.

However, the forecasts that the Commission will publish today reflect a smaller expansion: 1.9% this year and 1.5% next year, as advanced The world this Wednesday night and confirmed this newspaper. However, Spanish diplomatic sources trusted that Spain will grow this year above 2%. As they explained, Brussels forecasts were prepared before the GDP data for the third quarter of the year was published, which showed a growth of 0.43%. Instead, according to these sources, Brussels considered that Spain grew 0.3%. Likewise, Brussels considers that Spain will grow 0.3% in the final part of the year.

Without some Budgets that allow new income, Brussels considers, in addition, that this inertia will take the deficit to 2.3% of the Gross Domestic Product (GDP), three tenths above what is foreseen by the Government. And in a scenario of constant policies, the budget gap would continue next year. However, the sources consulted consider that if the year closes in line with the Government's forecasts – two tenths more -, the deficit objective set by Minister Nadia Calviño is attainable.

The European Commission sent a letter to Spain just two weeks ago in which it reminded it that it incurred the “risk of a significant deviation” from the deficit despite saying it was aware of the political situation the country is going through. After exiting the excessive deficit procedure, Brussels requires Spain to make adjustments regardless of the economic cycle. That is, permanent. That means that Spain must make adjustments for 6,600 million (with some flexibility). The impossibility of approving Budgets for the second year has caused Spain to continue reducing the deficit almost exclusively due to the effect of economic growth, as the European Fiscal Council has warned.