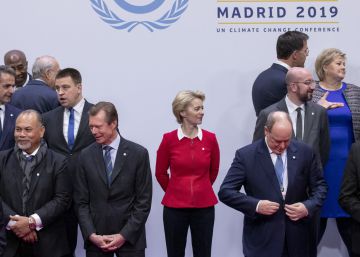 The president of the European Commission, Ursula von der Leyen, will propose tomorrow to expand the objectives of reducing greenhouse gas emissions of the EU planned for 2030, despite the resistance of important capitals such as Berlin. Von der Leyen's proposal is part of the so-called Green Pact, the strategy that the new European Commission will approve on Wednesday to fight climate change and try to make Europe lead the technological transition worldwide towards a more sustainable economy.

Brussels considers essential to raise that goal of 40% now set at 50% or even reach 55%, according to the draft Plan circulated this Monday and to which EL PAÍS has had access. The cut to 2030 would be the necessary intermediate stop for Europe by 2050 to achieve carbon neutrality, that is, zero net emissions or, what is the same, the end of the fossil fuel era.

Von der Leyen's proposal has yet to be accepted by the Community Parliament – something that seems feasible according to the recent pronouncements of the Eurocamara– and by the Council – something more complicated by the reluctance of some of the Twenty-seven, including Germany.

The approval of the Green Pact comes in half of the Climate Summit held in Madrid until Friday. This COP25, as this event organized under the UN umbrella is known, is a two-track circus this year. One focus is on Madrid and the other is on Brussels. Because, unlike what has traditionally happened, the EU is not showing the very clear leadership it has historically offered in the climate negotiations that led to the signing of the Paris Agreement in 2015.

This agreement establishes that all countries that sign it must submit plans to cut emissions and the sum of all of them must allow the warming to remain within non-catastrophic limits. Science has placed that limit in an increase in the average temperature between 2 and 1.5 degrees compared to pre-industrial levels. But the sum of all the countries' cut plans is not enough, so by 2020 the signatories of the pact should review them upwards.

That is the context of the proposal that Von der Leyen will present, which has strong defenders among the members of the EU, but also with countries that doubt that Europe should assume greater efforts while the other powers look the other way, like China , or just do not feel committed to Paris, like the United States.

The Green Pact that the European Commission plans to approve tomorrow, according to the draft, addresses a dozen areas, ranging from climate neutrality – eight emissions in 2050 – to the sustainability of the Common Agricultural Policy or the provision of millionaire funds to cover The energy transition.

Climate neutrality, according to the draft texts of the Commission, will be pursued by the adoption of a standard in the spring of 2020 that will make the zero emission target legally binding in 2050. The Plan includes a 5,000 million transition fund that, together with a game of 5,000 million of the structural funds and 1,500 million in guarantees, it would aim to mobilize investments of up to 35,000 million to help the countries most affected by the budding reconversion.

Some of these measures were already announced by the president of the Commission on the first day of the summit. However, regarding the increase in Von der Leyen, he did not comment on the increase in the emission cut target for 2030.

The draft Green Pact of the Commission does establish the commitment to approve before the end of next year a global plan that aims to reduce emissions by 50% or 55% in 2030. That commitment must also be presented to the UN during 2020 if an agreement is finally reached within the Union.

The Green Pact also includes an adjustment mechanism for energy imports, which would allow penalizing entry from countries where CO2 emissions exceed internationally acquired commitments. The draft of this rate, which has the support of the vast majority of partners, including Spain, could be approved before the end of 2021, according to the Commission's draft.

The Green Plan also announces, among other measures, a review of energy taxation, with mid-2021 as a tentative date, to penalize the most polluting sources; include the maritime sector in the Co2 emissions market and reduce the emission rights given to the air sector; and a new industrial and economic policy strategy circulates that would be approved in spring 2020.

The draft Green Pact also includes an adjustment mechanism for energy imports, which would allow penalizing the entry of electricity from countries where CO emissionstwo exceed commitments acquired internationally. The draft of this rate, which has the support of the vast majority of partners, including Spain, could be approved before the end of 2021, according to the Commission's draft.

Another of the measures in the Commission proposal refers to a review of energy taxation by mid-2021 that seeks to penalize the most polluting sources. In addition, it is planned to include the maritime sector in the carbon dioxide emissions market and reduce the emission rights that are given to the air sector. A new industrial policy and circular economy strategy that would be approved in spring 2020 is also included in the Green Pact.