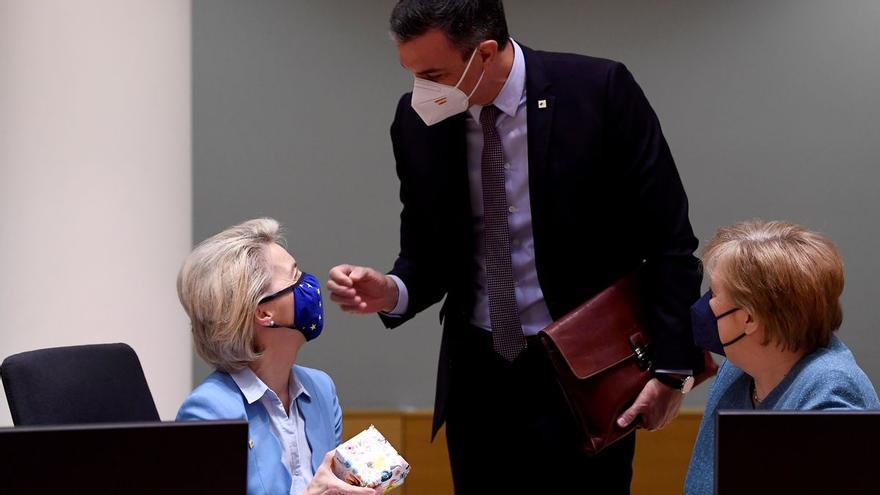 Approved. The Spanish plan has been approved this Wednesday, along with the Portuguese, in a clear message that, in this crisis, Brussels does want to prioritize the economic health of southern Europe. For this, the president of the European Commission, Ursula von der Leyen, traveled to Lisbon and Madrid this Wednesday. The approval of Brussels implies that it gives free rein to the 69,500 million in transfers requested by Spain until 2023 - the other half, in the form of credits, has not yet been requested by Spain, and has until 2026 to do so - and, to begin with, to 9,000 million of pre-financing for plans started in February 2020 that could arrive as of July. In fact, the Community Executive has already raised 20,000 million in the markets in the first issuance of community debt issued this Tuesday in the markets.

"We now hope that in less than 4 weeks the Council will pronounce in the same way and announce that I will convene a conference of the regional president to discuss the recovery plan with them, who are also protagonists, like the thousands of mayors," said Sánchez .

Those 9,000 million will arrive after the approval of the Council (the Governments), for which they have a month, and on July 13 there is Ecofin, which could be the day the money is released. Money that will be disbursed as each country meets the milestones and objectives to which it has committed: without objectives met, there is no money.

The Brussels analysis finds that "the plan represents a balanced response to the economic and social situation in Spain", and that "it contains measures aimed at improving the employability of young people and further reducing the rate of early school leaving. It also proposes a simplification of contracts to reduce abuse of temporary hiring ".

The European Commission stresses that "there are substantial investments to train workers and modernize the vocational education and training system. The plan also foresees concrete actions in the field of active labor market policies, including the reform of the system of incentives for employment. recruitment, the development of individual counseling pathways, the strengthening of the adult learning system and the modernization of public employment services. "

Regarding the reforms, Brussels explains that "the Spanish plan includes a broad set of reforms and investments that are mutually reinforcing and that contribute to effectively address the economic and social challenges described in the country-specific recommendations addressed to Spain in the Semester. European of 2019 and in 2020 ".

In this sense, "the plan addresses the recommendations in the areas of investment in the green and digital transitions, strategic sectors and research, development and innovation. The plan includes measures to improve the business climate, with important actions to improve regulation, reduction of delinquency and the reform of the bankruptcy framework ".

"The plan addresses country-specific recommendations in the field of public finances, including a reform of the spending review system, a reform to improve the fight against tax fraud, a reform of the public procurement framework and the tax system." , Brussels lists: "The plan includes a reform of the pension system with the aim of preserving its adequacy and sustainability in the medium and long term and supporting a longer working life. The final design of the reform is subject to the outcome of the dialogue process Social".

"The plan also contributes to social and territorial cohesion, with measures in health, education, professional skills and social policy," adds the European Commission.

According to the evaluation of the European Commission, "the contribution to the green transition of the Spanish plan amounts to 40% of its allocation of 69,500 million", which "exceeds the minimum of 37% required by the regulation of the recovery and resilience instrument" .

The Community Executive highlights that the measures to help ensure Spain's green transition "include 3,900 million for the development of renewable energies and 3,400 million to support the renovation of more than half a million residential buildings to improve their energy efficiency."

In addition, "it includes measures to promote sustainable mobility; decarbonize industry; reduce energy dependence and help mitigate the adverse effects of climate change by preserving coastal spaces, ecosystems and biodiversity." Finally, Brussels details that the plan "promotes the circular economy by improving water and waste management in the country."