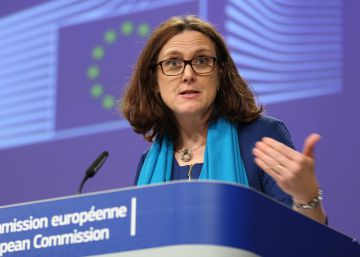 The European Commission will retaliate after the United States has decided to go ahead and impose tariffs on imports from the European Union for 7.5 billion dollars (6.9 billion euros) for aid to Airbus. The Commissioner of Commerce, Cecilia Malmström, has warned that this step leaves the EU "with no alternative" to impose "in due course" its tariffs for the contentious also derived from the illegal aid that the US Administration granted to Boeing. The European Commission asked the World Trade Organization (WTO) to tax US products worth 12,000 million euros.

The United States has ignored all EU demands to curb the escalation that may result in the mutual imposition of new tariffs. For 15 years, both sides drag a conflict over the aids that have been granted to the aviation industry. And in both cases, the WTO considered that these subsidies were illegal. The Geneva-based body already authorized the United States on Monday to set new taxes on European products, which mainly affect the United Kingdom, France, Germany and Spain. The EU is pending that, in the coming months, do the same with your request.

The European Commission was in favor of burying the ax of war to prevent both blocks from punishing each other with new encumbrances. Max in a context of trade war and with the president of the United States, Donald Trump, keeping in his sleeve the possibility of giving another blow to Europe imposing tariffs on the automobile sector for “reasons of national security”. The countries most affected by the new measures, including Spain, have pressed Brussels not to loosen up against Washington.

The entry into force, this Friday, of US sanctions leaves no choice but to respond. “This step leaves us with no alternative but to follow, in due course, with our own tariffs in the Boeing case, in which it was determined that the United States violates the rules of the WTO, ”Malmström said in a statement. The Swedish Commissioner added that from now on the impact of the measures on the products concerned will be monitored, especially in the agricultural sector. "The European Commission is committed to defending European companies, farmers and consumers," he added.

In the Spanish case, tariffs affect products such as wine, cheese or olive oil. In total, to sales that the Ministry of Commerce values ​​at 1,000 million euros.