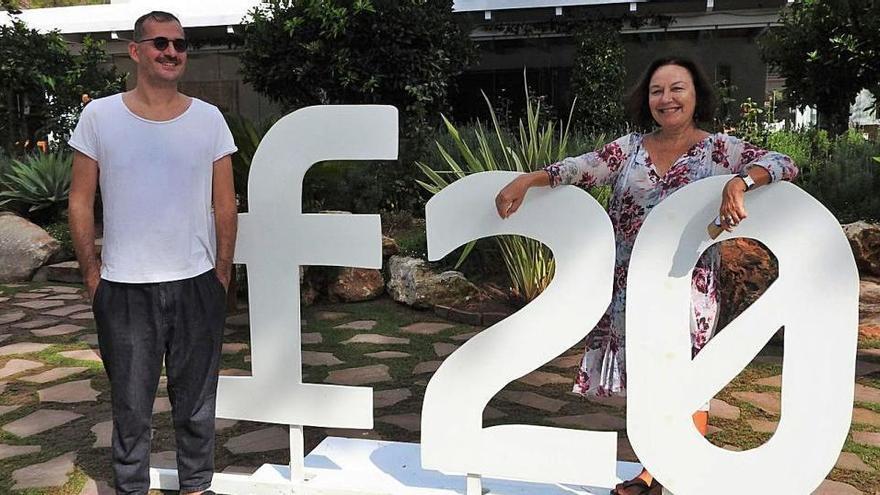 The creation of brands, beyond logos, fonts and new graphic concepts adapted to new digital tools is the main activity of Bruno Sellés, founder of the renowned Vasava agency. This design expert is one of the speakers at the conference on digital culture, marketing and communication Formentera 2.0 that will be held until October 4.

His is the creation of brands, branding and rebranding but his passion is typography, subject in which this creative director defines himself as self-taught. Bruno Sellés is almost a stalwart of the appointment that Rosa Castells, Formentera 2.0 organizes every year, around digital culture, marketing and communication. Her father, Toni Sellés, and she are the founders of the Vasava agency, dedicated to typography, illustration, interactive design and animation since 1997, and this year she repeats as a speaker.

– His presentation will be on the creation of brands and everything associated with it.

– Yes, I am going to talk about the brandring and rebranding projects. The latter is the process of redefining a brand when it already exists and faces the challenge that you have to change for whatever reasons. Finally, it is about maintaining the most significant DNA of the brand itself and then instilling values ​​that give it modernity.

– What does a brand have to have to work?

– Above all you have to have a story to connect with an audience. At the end, What is the difference between a car and another car? It’s four wheels and a steering wheel, right? What is different is what each one tells you, one can be for the adventurers and the other for the family, that is, you connect with a story that they are proposing. We are dedicated to creating those fictions that help establish that communication with customers or users of a brand.

– Has the way of communicating changed a lot?

– Yes, before brands communicated in a unidirectional way, through advertising campaigns based on repetition, now communication is bidirectional. A brand tells something and immediately they are refuting, criticizing, supporting or questioning it on social networks. Now it is about establishing dialogues, rather than repeating and proclaiming messages.

– Sometimes it seems that the story of a brand does not respond to what the product is.

– That’s right, and you probably won’t use all the features of the product. But if they don’t sell it to you with the ‘aspirational’ idea, which makes you think that this product is going to serve you achieve a series of goals or even achieve a state of mind, It is difficult to attract you or stand out from the rest of the offer.

– Don’t you think that we are constantly bombarded with advertising messages?

– My field is not advertising, I am more dedicated to design which, on many occasions, is at your service but on other occasions it is a much broader activity that is applied in other areas. On the question and from a design perspective, everything around us, except nature, has been designed by man. From a road plan to the clothes we wear. That is why we are subjected to a space that is conquered by brands, messages and trends that effectively bombard us and make us become part of the systems they create. One of the problems is that most of this design lacks a deep emotional proposal or a certain depth and lacks interest beyond highlighting. That’s why most of the design around us is rubbish. Designers would have to be aware to create content with a slightly more elaborate quality and not simply try to stand out for its aggressiveness, exaltation and repetition, but rather look for the positive values ​​of a product and point them out intelligently.

– Have traditional distribution media been in the background in favor of social networks, the digital world?

– Digital media have transformed the way a message is distributed and directed. Before, it was like a pump that you started up in a massive place and tried to impregnate the more people the better, without knowing who they were. Now advertising is much more targeted and is based on the manipulation of which we are all victims through large technology companies and social networks. In the end we have profiles created by those who know our habits and they give us supposedly free services to collect information. That way they know your tastes and they will sell you products according to them, but they also know what time they will influence you the most and they will know if you have a friend who is also interested.

– It is very scary, it is terrifying and it also produces frustration. The whole topic of social media is debatable and questionable as well as the bill that all this will pass to society.

– Is this situation reversible?

– The problem is that social networks are designed to create an addiction, stimulating your dopamine, through small doses. Everything is designed by engineers who are dedicated to finding the mechanisms so that your primitive brain is stimulated all day, through prizes, such as a ‘like’. And like all addictions generate dependency and the cult to receive attention from others is fed. It is an issue that worries me especially because I have a 12-year-old daughter, so I usually observe this profile closely.

– Are we educated to use digital tools?

– No. You learn as you go. The problem is that there is an appearance that is that everything seems to be free and accessible, I can publish, I can edit photos, record a video and I can create an improved image of myself and that is very attractive because to many people, at first moment, it helps you feel good, feel good. The counterpart is that it also serves to keep us under control and that they manipulate us, although in the end it only ends up in that they sell us a vacuum cleaner, for example.

– Returning to your work, have you also had to adapt to the pandemic situation?

– I’m going to talk about this in Formentera 2.0, specifically graphic design, which is one of the disciplines on which Vasava bases his work. And in our role as designers we had to turn the wheel to adapt to the pandemic And that happens through another way of working with clients and the nature of the work has also changed. We have transformed physical projects into digital ones, just as we have applied teleworking in certain percentages to our activity.

– What do you think of the Formentera 2.0 initiative?

– It is a fantastic initiative in this context so relaxed and so calm and connected with nature. But it also gives you the opportunity to see and speak to a lot of professionals, there is a great deal. This would not be the same in a city, in a rush and under stress. This environment gives you the opportunity to delve deeper into what is said and have a closer relationship, both with those attending the event and with the speakers, that is why we have repeated so many times.