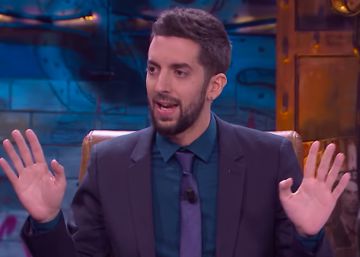 Exhausted every time I turn on the TV, that thing that supposedly offers company, entertainment, information and that repeats, until the exhaustion of the receiver, meteorological parts, the same images over and over again illustrating some subject that contains invaluable morbidity according to the criteria of the programmers (hopefully the shameless stretch of chewing gum will leave their jaws deformed), politicians even more hollow, predictable and silly than those released at other times of the year and in which, seriously doubting the ability of the listener to understand , they crush him with the same phrase, I desperately seek a break in this torrid and endless August, a program in which I do not feel treated as a mentally handicapped.

I find that oasis by discovering the program late and unforgivably in Movistar The resistance, that therapeutic invention of a comedian, comedian and showman extraordinary call David Broncano. They told when I was little that only the buzzers laughed alone. They don't know how happy I feel to be part of that group, with those smiles and laughter in solitude that soothe the soul. I do it continuously listening to the monologues, improvisations, dialogues and interviews that this transparently unusual, surrealist humorist gives me, with tons of street, someone who shoots in all directions, with the mental agility of the great, uninhibited to dangerous limits. And I love that he laughs at his own thanks.

They tell me that Broncano sweeps a lot and a certain young audience. They follow you through that YouTube thing. It is encouraging. Not everything is lost. It can resist.