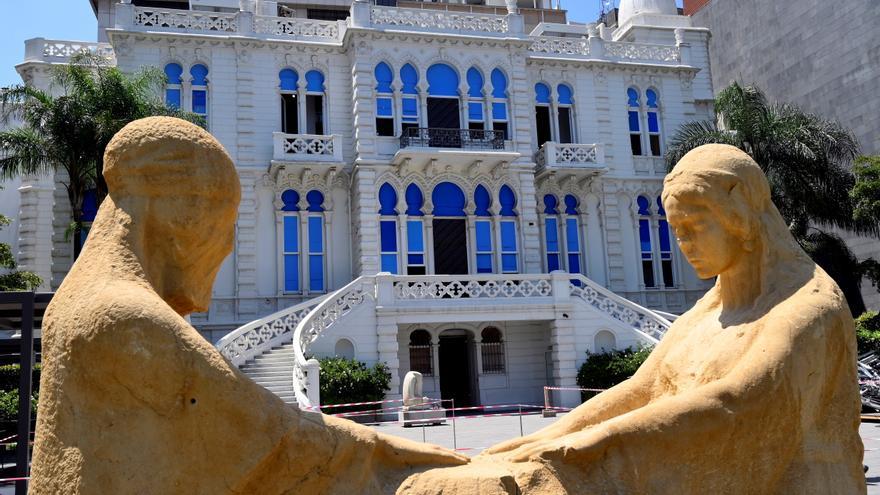 Beirut, Jun 18 (EFE) .- In a dimly lit workshop half an hour southeast of Beirut, half a dozen workers are busy measuring, cutting and assembling wooden pieces from the iconic Sursock Museum of modern and contemporary art, which the August 4, 2020 they jumped through the air next to windows, roofs and stairs.

Amid the hum of machines and saws against wood, Maison Tarazi artisans work with the remains of the museum recovered after the great explosion that originated in the port of Beirut, some 800 meters away, and add other pieces new meticulously designed to recreate an original rose window of the building.

“It is a process of restoration and at the same time of reproduction,” the manager of this old family workshop, Camille Tarazi, explains to Efe. It ensures that when the frame is painted and a series of colored glass is inserted into it, it will be impossible to detect any difference between the original and new parts.

While Maison Tarazi creates the wood paneling and doors for the building’s “historic” first floor, other artists, masons and experts are busy redoing the stained glass or restoring damaged artwork to restore the property to its former glory.

This imposing white-fronted mansion with grand stairways in the heart of the Lebanese capital was built in 1912 by the aristocrat and art aficionado Nicolas Sursock, who decided to mix traditional Lebanese architecture with Venetian influences for his unusual residence.

Before he died in 1952, “he surprised everyone, including his family, by deciding that the house would be donated to the Lebanese people and would be transformed into a museum,” its director, Zeina Arida, tells EFE.

Although for years the then president of the Mediterranean country, Camille Chamoun, used the building to house distinguished guests such as kings and heads of state, the pressure exerted by the Sursock family translated in 1961 into the fulfillment of Nicolas’ last will.

Decades later, between 2007 and 2015, the building underwent a major renovation and expansion as part of a late reconstruction project after the Lebanese civil war (1975-1990).

The historic first floor survived a century intact as Sursock had designed it, but on August 4, 2020, just five minutes after the museum closed its doors, it was rocked by the shock wave that swept through several Beirut neighborhoods. causing more than 200 deaths and 6,500 wounded.

The museum was “badly damaged” and lost all its doors and windows, the side stairs, the ceilings and even the elevators, in addition to 57 of the 130 exhibits being affected.

“The works of art were also damaged because the permanent collection was on display on the second floor and an exhibition had opened two months earlier in the galleries on the first floor,” the director details.

Thanks to donations and grants, almost $ 2.4 million have been raised so far for the renovation work, which began last February, and the art restoration campaign, which began in May.

Today, only the waterproof sheets that replace the window panes and a mass of debris in the courtyard denote the damage to the exterior of the building. However, inside, the rooms are still littered with bricks and scaffolding.

On the outskirts of Beirut, in the studio of glass artist Maya Husseini, a small team of three works seven days a week to craft dozens of new stained glass windows for the museum.

Husseini, who also participated in the last renovation, cuts out numbered cardboard patterns that he places on the glass sheets to obtain the colored pieces that will later be assembled with metal strips. The task is arduous, involves ten different phases, and will take about six months to complete.

The material was donated by one of the last companies that still makes blown glass in France, Verrerie de Saint-Just. “Each crystal is unique,” says Husseini.

Fortunately, the artist still had her drawings of the windows created based on black and white photographs from before the war. The absence of color in the original images made it necessary to intuitively choose the colors red, orange, blue and yellow.

Arida estimates that they will not be able to reopen the gallery until the beginning of 2022, but everything indicates that once again the last will of Nicolas Sursock will be fulfilled.