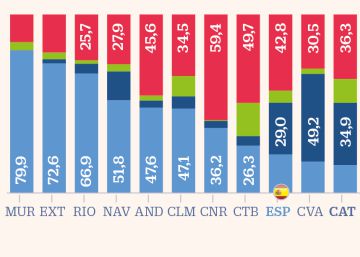 The Murcian orchard and the Aragonese automotive industry would be two of the sectors that would suffer the most from the consequences of a Brexit without a trade agreement between the European Union (EU) and the United Kingdom, which are debating the economic relationship between the two blocks in 2021, when The transitional period agreed between Brussels and London ends after the political Brexit. Murcia and Aragon, in relation to the size of their economies, are the Spanish autonomies most exposed to the United Kingdom. In relation to its GDP, exports to London account for 3.2% and 2.5%, respectively, compared to the Spanish average of 1.5%. Galicia and the Basque Country, both with 2.4% of GDP, would also suffer with a divorce without an economic agreement.

Direct trade exposure to the United Kingdom shows notable differences between autonomous communities, as reflected in the data collected by the Bank of Spain and published yesterday in the bulletin Spanish companies that export goods to the United Kingdom. Thus, while more than 3% of Murcia’s GDP is sustained by these exports, less than 1% of the wealth of the two archipelagos, Extremadura and Castilla-La Mancha, depends on these movements.

In absolute terms, the region that shows the highest proportion of total Spanish exports of goods to the British economy is Catalonia (21% of the total), followed by the Valencian Community (13%), the Community of Madrid (12%) and Andalusia (11%). However, they recall from the agency, the exposure in terms of GDP and weight on the total sales of these four regions is not so high compared to that of some other communities. Thus, 9.3% of all Murcian exports go to the United Kingdom, a percentage that is also high in the case of the Valencian Community (8.1%) or La Rioja and Madrid (both with 7.6% ).

There are also dissimilarities when analyzing the different sectors. In the Spanish regions that would suffer the most from the lack of understanding between Brussels and London, the food industry in the case of Murcia, and the automotive industry in the case of Aragon, would be the most damaged. In the Mediterranean region, for example, the food, beverage and tobacco sector accounts for almost 80% of exports. In Aragon, for its part, the automotive industry accounts for 62% of sales.

Extremadura’s orchard and countryside, like Murcia, account for 72% of its exports, but the weight of these sales in Extremadura’s GDP does not exceed 0.5%. A similar case is the one found in the Balearic Islands: chemical exports, with 45% of the archipelago’s total, are undoubtedly those that have the most weight within the islands, but their proportion in the regional GDP remains at a mere 0.2%. In Andalusia, exports of food and beverages to the United Kingdom are also relevant (48%), but their weight in GDP is 1.3%, below the Spanish average.

In the hypothetical case that the final relationship between the EU and the United Kingdom involves the adoption of tariffs, something not to be ruled out considering the course the negotiations are taking, the potential vulnerability of each region would depend not only on the relative weight of its exports to British soil, but also on the structure by products and sectors, “since the different types of goods bear different levels of tariff rates,” recalls the Bank of Spain. Agri-food products, textiles and, to a lesser extent, the automotive industry, are among the headings to which, on average, the highest tariffs are applied.

For this reason, according to the supervisor’s calculations, and taking into account the bulk of exports and their weight in regional wealth, Murcia and Aragon would be joined by Galicia and the Valencian Community as the autonomous regions most punished for the lack of agreement. A separate case is that of the Basque Country. Although sales to the United Kingdom account for 2.4% of its GDP, the bulk of the Basque Country’s exports are based on other industries less affected by possible tariffs.

Fall since the referendum

Since 2016, the year in which the referendum that resulted in the United Kingdom leaving the EU was held, the Bank of Spain has seen a general drop in the relative weight of this country in both exports of goods, weighed down by sales related to the automotive sector and some foods, as in the number of companies that export, concentrated in non-regular exporters.

However, the agency emphasizes that these developments are framed in a context of uncertainty linked to Brexit and the weakness of the British currency, which could also have discouraged the penetration of new exporters in this market.

In most communities there is a decrease between 2016 and 2018 in the total relative weight of companies present in the British market, a direct consequence of the increase in geographic diversification. In any case, the Bank of Spain attributes this drop mainly to the reduction of those with unconsolidated activity in this market, since those that export regularly (at least four consecutive years) have increased significantly by 6 points to 60%, a general increase between communities.