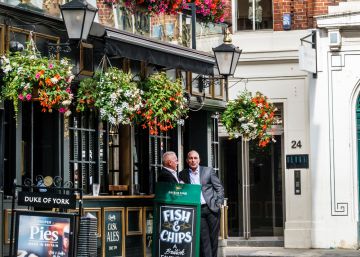 Tic, tac, tic, tac ... The countdown is already underway. October 31 is the deadline for the United Kingdom to sign an exit agreement from the European Union, or to leave the community project for the brave. As the hands of the clock advance, the chances of a hard Brexit increase. This scenario, with apocalyptic dyes, is heavenly music in the case of some investors, who are taking advantage of the troubled river to fish British companies at attractive prices.

Between April and June the volume of operations in which a foreign firm was made with a British group amounted to 18.4 billion pounds (about 20.790 million euros), while in the previous quarter this type of agreements barely reached 10.8 billion, according to the latest data from the Office National Statistics (ONS) according to its British acronym.

Be it a hard Brexit or a negotiated one, the truth is that the call smart money He has concluded that on November 1 the world will not stop and that in the United Kingdom there are competitors with large assets that are now valued with significant discounts for the market. The Footsie Index 100, the country's main stock market thermometer, rises around 8% so far this year. However, its seemingly good evolution is conditioned by the large British multinationals for which the impact of Brexit will be less as its businesses have diversified geographically. On the other hand, among medium and small-sized companies there are many that are listed at multiples below their historical average.

"We believe that the next two months will be an extraordinary opportunity for the purchase of British assets," Goldman Sachs said on August 15 in a note sent to his institutional clients. "In this regard, we expect venture capital to continue to materialize operations if the rest of the investors withdraw due to political volatility," added the giant of the US investment bank.

The string of British companies that in recent months have become controlled by foreign hands is increasing. A recent example is Greene King. The chain of pubs, whose origins date back to 1799, has gone to the Hong Kong group CK Asset Holdings after disbursing 4.6 billion pounds. With Brexit or without him, the English will not stop drinking pints and Asian tycoon Li Ka-Shing has acquired more than 3,000 establishments, including bars and hotels, from Greene King. "Pubs are an important part of British culture and the company's profile suggests that it has a strong capacity to generate cash," read the press release announcing the acquisition.

The purchase by the American toy manufacturer Hasbro of the producer of the famous cartoon Peppa Pig (which also owns brands such as Monopoly, Scrabble or My Little Pony) for 3,500 million has also been sounded. These agreements follow the trail of space and defense provider Cobham, bought by private equity firm Advent after offering 4 billion pounds. Another draft in 2019 was the one carried out by the American firm Marsh & McLennan, which closed the purchase of the insurance company Jardine Lloyd Thompson on March 31 in a transaction valued at 4.6 billion pounds.

"The devaluation of the pound sterling is the reason why some British companies are being acquired by foreign investors," explains Thomas Sampson, associate professor in the Department of Economics at the London School of Economics (LSE). The weakness of the local currency (which in the past 12 months has devalued more than 5% against the dollar) is also the reason that gave the publication Cityam.com Julian Stanier, partner of the corporate finance area of ​​Pinsent Masons, to justify the boom in these types of operations: “British assets are highly valued by international investors and the impact that Brexit is having on the pound makes agreements at relatively cheap prices secured. Many, including venture capital groups that are sitting on mountains of liquidity, believe that it is the perfect timing to gain real bargains.

Will a hard Brexit end with this external appetite? Sampson, for example, in this scenario poses a loop situation. "If there is divorce without agreement at the end of October, I think the pound will be further devalued and therefore British assets will be even cheaper, encouraging the arrival of more investment." However, the LSE expert recalls that an opposite effect (of withdrawal) cannot be ruled out because of the chaos that an exit by the braves would bring to an economy like the British, which already shows signs of stagnation. "This scenario could keep foreign investors away as the UK would become a less interesting option if the community market cannot be accessed."

Although it is a divided society on what the course should be for the country, there is agreement regarding the fact that many companies fall into foreign hands is a blow to national pride. “As foreign interest increases, the absence of intervention to protect strategic assets from unwanted bids worries in some corporate headquarters. The strict British regulation enables the Government to intervene with relative ease if it is to protect the interests of national defense, but that power is being underused by the Executive, ”Stanier recalls.