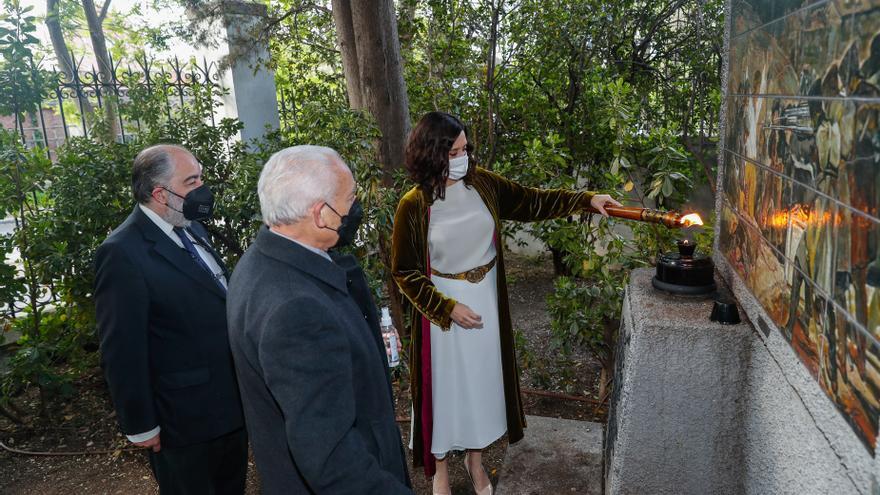 
United We can launch a promotional video on the last day of the campaign in which it calls for mass mobilization under the slogan “they are illusions.” In it, known optical illusions are used to refer to “fictions constructed by the Community Government”.

“Optical illusions are distorted perceptions of reality, our senses deceive us and make us see forms that do not exist or things that are not what they seem,” explains the video. “There are no gray points between the squares, nor does this staircase descend to infinity, nor is Madrid a region of the right.”

Below are images of various leaders of the Popular Party that the Community of Madrid has had, such as Alberto Gallardón, Esperanza Aguirre, Ignacio González, Cristina Cifuentes or Isabel Díaz Ayuso, while they affirm that the right-wing parties “do not manage the economy better and do not they respect the rules of the game. ”

He also refers to the extreme right by showing images of demonstrations in which the fascist salute is made while stating that “this should not be normal in a democracy” and that “their victory is also that of fascism.”

From Unidos Podemos they appeal to a majority that symbolizes memory, the periphery, the struggle, freedom, resistance, culture, equality, joy, the future and the community, affirming that the majority of the right wing is “an illusion optical “, while his is” a collective illusion “.


The candidate of Ciudadanos, Edmundo Bal, has made this Sunday a call for the vote of the “moderate people of Madrid, we are the majority” so that on May 4, the day of the regional elections, they choose between a Government of Ayuso with Citizens or with Vox: “There are only two options, that Mrs. Monasterio is vice president or that the vice president is me,” he has sentenced.

During the celebration of the institutional acts of the Dos de Mayo festival, Bal took stock of these campaign days and pointed out that it has been “an exciting and very beautiful campaign” in which he has strived to be “the candidate of all Madrilenians “.

“I am sorry that it ends. In Ciudadanos we have shown that we are all united around the project of Inés Arrimadas.” “The only thing that has worried me – he added – is the confrontation and insults” that the rest of the candidates have uttered while he has focused on explaining his proposals “committing myself to sign them even before a notary.”

The Ciudadanos candidate recalled that in these elections “we are playing a lot, we are playing the Madrid of the future within tolerance or moderation”, or on the contrary “within confrontation and tension”. “I invite the people of Madrid not to bet on the confrontational agenda that Mr. Iglesias has set for us and not to bet on the setback agenda that Mrs. Monasterio has put in front of us. I invite you to commit to tolerance and moderation That they bet on a government that worked and that will continue to provide solutions to the people of Madrid for the next two years to guarantee the future, “insisted Bal. “These are special elections because the moderates are going to be decisive in the formation of the government,” he concluded.


The day that Mónica García stood in front of the camera to say no to a joint candidacy with Pablo Iglesias, Íñigo Errejón had a press conference in Congress. Garcia’s video was an allegation against “testosterone” and “tutelage of women” and was spreading at high speed.

“Feminism has taught us that we do not always have to be the protagonists,” tweeted the deputy of Más País after canceling the call. The party wanted to avoid re-staging the Iglesias-Errejón fight that broke Podemos in 2019. Since then, the deputy and leader of Más País has remained as a supporting actor for the first time in his political life and away from any partisan confrontation.

Carmen Calvo: “I hope Madrid is not the capital of Europe that governs the extreme right”


“Health does not improve because you do not meet your ex on the street.” Carme Calvo (Cabra, Córdoba, 1957) is very critical of Isabel Díaz Ayuso’s management and her electoral campaign. “The opposition has used the pandemic politically,” says the First Vice President of the Government and Minister of the Presidency. “The grotesque situation in which Ayuso has put Madrid is back and forth, regardless of Tuesday’s result,” he predicts.

The person also responsible for Equality of the PSOE advances in this joint interview of infoLibre and elDiario.es that the trans law “advances more than it seems.” He has held several recent meetings with the Minister of Equality, Irene Montero, to unblock it. The text divides the Government and the feminist movement itself and she insists on “treading on safe” and avoiding all risks of unconstitutionality with guarantees that she suggests but does not specify. He is categorical in rejecting a Crown Law, exhibits harmony with Yolanda Díaz, the new third vice president and recognizes that since he has been in government he has not had a vacation. “I don’t know what it is to disconnect,” he says without complaint.

Fifteen bullets without a rifle to poison a campaign


The temperature of the 4M electoral campaign has risen in recent days with the irruption of a hitherto unknown agent in a Madrid election: death threats to politicians. To the sending of envelopes with ammunition to the Podemos candidate, Pablo Iglesias, first, and to that of the PP, Isabel Díaz Ayuso, later, the refusal to condemn the facts by Vox and the conspiracy theories about the authorship of the shipments to members of the Government and Pablo Iglesias from the spectrum of the right.

Fifteen bullets have penetrated the electoral contest to further tighten an appointment that all its protagonists face as decisive for the political future of the country.


The More Madrid candidate for the regional Presidency, Mónica García, this Sunday encouraged Madrilenians to demonstrate on May 4 election day, with their vote, that the often repeated “living in Madrid” means empathy and not pride.

He has pointed out that he trusts that this is “the last act done” by the president and candidate for re-election, Isabel Díaz Ayuso, whom he has described as “a good actress of provocation.” He has criticized that “he has left out” of the informative coverage of the act to Telemadrid, the public television of Madrid.

“Let’s hope it is the last act of Mrs. Ayuso, because we deserve a decent government that thinks about the common good,” he concluded.


The PSOE candidate for the Presidency of the Community of Madrid, Ángel Gabilondo, has called this Sunday to go to the polls on May 4 with the aim of “turning applause into votes” and thus have “better public services.”

“I encourage you to vote because it is the maximum expression that we are all important, our vote is decisive; it is not enough to applaud, you have to vote to have better public services,” he told the press before the start of the institutional act for the holiday of the May 2nd.

Gabilondo has had a memory for those who “have died” from the pandemic, as well as “recognition and respect.” He has appealed to unity, because “Madrid must be reunited.” “It is our obligation to unite; not to turn politics into a confrontation,” he went on to emphasize.

Thus, he pointed out that Madrid residents will have to decide on May 4 “who will lead this recovery.” “We want to win and govern in that order, and we will achieve it on May 4,” he added.


The unexpected advance of the Madrid elections to be held next Tuesday forced the leader of the Popular Party, Pablo Casado, to carry out another contortion, the umpteenth turn in his political career, characterized by continuous lurching since his victory in the 2018 primaries. When, on March 10, the president of the Community of Madrid and candidate for re-election, Isabel Díaz Ayuso, called the 4M elections, Casado was immersed in an operation to embrace the center after the defeat after his crash in the Catalan elections.

The maneuver went through absorb the remains of Ciudadanos into the PP –Which also suffered a great debacle in Catalonia– in accordance with the requests of the barons who, since two years ago, they ask him to stop temporizing with the extreme right of Vox.


The campaign countdown for the early elections of May 4 in the Community of Madrid has arrived with the candidates multiplying their agendas with various events and interviews a day to rush the last hours.

The left-wing parties also roll up their sleeves to encourage participation in the southern neighborhoods and municipalities, their traditional voting granaries, and mobilize the workers’ vote as the only option to seize power from Isabel Díaz Ayuso, although they recognize that she has become in a very complicated feat.