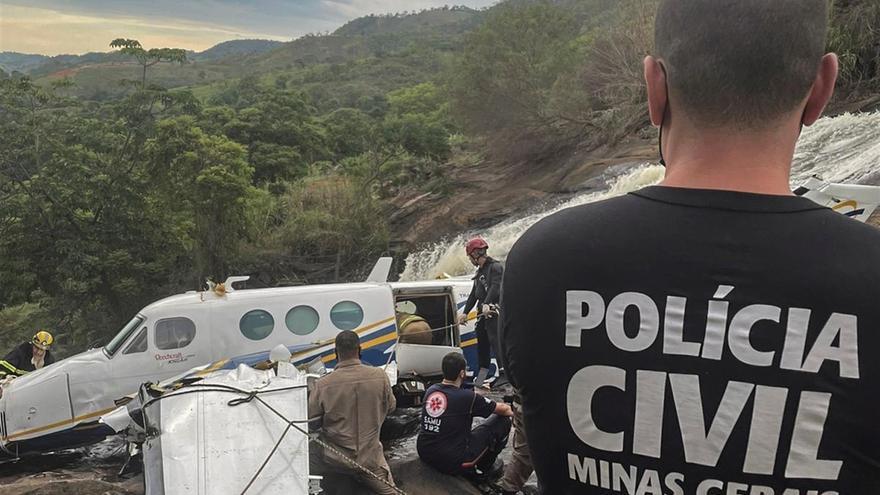 The singer and songwriter Marília Mendonça, one of the most recognized artists in Brazil, feminist icon and winner of a Latin Grammy in 2019, died this Friday in a plane crash that has caused a huge commotion in the country.

Mendonça, known as the “queen of suffering” for her melancholic and profound style, has died at the age of 26, at the height of her artistic career, which began when she was a child, writing lyrics to successful compositions. The other four occupants who accompanied him also died in the accident: his producer Henrique Ribeiro, his uncle and advisor Abicieli Silveira, as well as the pilot and co-pilot of the aircraft.

The accident occurred at around 3.30pm local time (6.30pm GMT), when the device crashed into a rocky area near a waterfall, in the town of Piedade de Caratinga, in the state of Minas Gerais (southeast). The first line of the investigation opened to clarify the causes of the tragedy points out that the plane collided with some high tension cables before hitting the ground, just two kilometers from the runway.

The singer had planned to offer a concert tonight in Caratinga, about ten kilometers away from the scene of the accident, before 8,000 of her fans.

According to released images, the aircraft, a Beech Aircraft model and which had all the papers in order, according to the Brazilian authorities, fell into an area difficult to access for rescue teams due to the steepness of the terrain and the water that descended at high speed.

In recent years, Mendonça has become a reference for contemporary Brazilian music, especially Sertaneja music, one of the most popular styles of the South American giant that revolutionized with various themes on female empowerment.

All this transformation of a genre until then dominated by men and joined by other Brazilian singers, led to the creation of the genre “feminine”, in which women are the protagonists.

Born on July 22, 1995 in the municipality of Cristianópolis, in the state of Goiás (center), Mendonça began composing when she was just 12 years old. At that young age he wrote songs like “É Com Ela Que Eu Estou”, “Até você voltar” and “Cuida Bem Dela”, which became popular in the voices of other artists.

In 2016 he began to emerge on the Brazilian music scene with the launch of his first album, which he named after him and included hugely successful songs, such as “Saudade do Meu Ex”, “Folgado” and “Infiel”, this last song was the most sung and played of that year in Brazil. The following year he published his second work, “Realidade”, which has already earned him a Latin Grammy nomination, but it was not until 2019 that he won the prestigious award in the category of Best Sertaneja Music Album for his project “Todos os Songs “.

Mendonça received this recognition when she was pregnant with her son Léo, who will be two years old in December. The renowned artist was currently resuming her concert schedule after the stoppage caused by the coronavirus pandemic, which has caused almost 610,000 deaths in Brazil.

Upheaval in culture, politics and sport

The unexpected loss of Mendonça has generated a torrent of reactions from the world of culture, politics and sports in Brazil. The president, Jair Bolsonaro, said that the “entire country” is “in shock” by the death of “one of the greatest artists of her generation, who with her unique voice, her charisma and her music conquered the affection and admiration of everybody”.

Former progressive president Luiz Inácio Lula da Silva, Bolsonaro’s greatest political antagonist, sent his condolences “to the relatives and millions of followers of the music, charisma and irreverence” of Mendonça.

On the other hand, renowned Brazilian artists with the singer Anitta or the singer-songwriter Caetano Veloso also expressed their sadness on social networks. “One of the nicest women I’ve ever come across in my career,” Anitta said. “I’m crying. I can’t believe it,” said Veloso, one of the greatest exponents of Brazilian Popular Music (MPB).

The same reaction had the Brazilian striker Neymar, a Paris Saint-Germain player, who also refused to acknowledge what happened. “I refuse to believe it, I refuse,” said the Canarinha star.