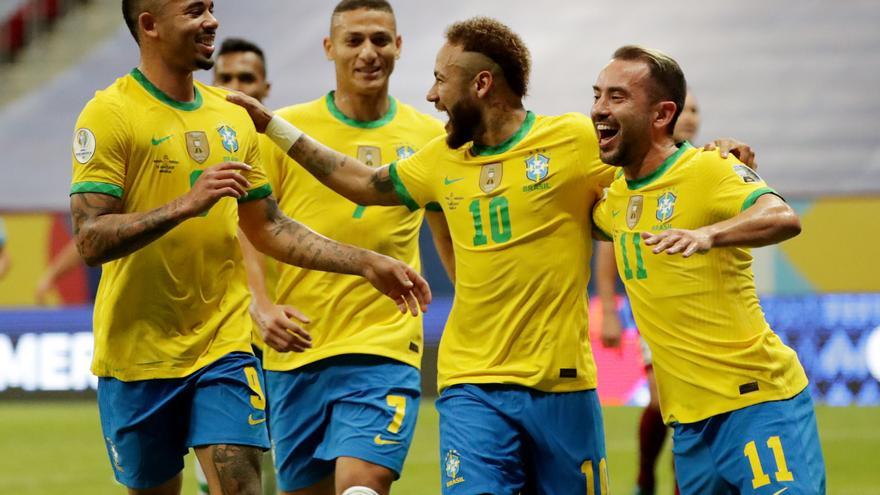 The Brazilian soccer team, at half speed, beat Venezuela 3-0 this Sunday and thus opened the Copa América 2021, a tournament that began amid controversy and in the shadow of the coronavirus pandemic, that has affected several of the participating delegations.

The defender Marquinhos (22 '), Neymar (63') and Gabriel Barbosa "Gabigol" (88 ') They sentenced the easy Brazilian victory against a timid Venezuelan team that felt the changes forced at the last minute by a coronavirus outbreak that separated eight players a day before the game.

The scoring was opened in the 22nd minute by Marquinhos with a shot with his left foot after a corner kick taken by Neymar, his teammate in the French Paris Saint Germain. Brazil finished the first half with a minimal advantage, which contrasted with the clear opportunities they had: two goals disallowed by Richarlison and a shot off the post by Neymar.

In the 61st minute, Danilo passed Luis Del Pino Mago and was later brought down by Yohan Cumaná. The penalty was executed flawlessly by Neymar two minutes later. The third goal was converted by Gabigol in the 88th minute, after a combination of Neymar and Alex Sandro and the Flamengo striker defined with a cross shot on Graterol.

📌 The @CBF_Futebol, the homeowner, started on the right foot, beating the @SeleVinotinto in the opening match of CONMEBOL @America Cup 2021!

Incidents: match corresponding to the first day of Group B of the Copa América played at the Mané Garrincha stadium in Brasilia, without an audience.

Lack of inauguration and absence of Bolsonaro

Without the presence of the Brazilian president, Jair Bolsonaro, and with an insipid inauguration, tarnished by the lack of public, the Copa América football club kicked off this Sunday in Brasilia amid the specter of the pandemic.

The entrance to the field of the trophy that the winning team will take, the video of the official song of the tournament: "La gozadera, the official 2021", by the Cuban group Gente de Zona, and some faded fireworks marked the beginning of the controversial edition of the Copa América.

The South American giant hosted the tournament at the last minute, after Colombia, due to public order problems, and Argentina, due to the coronavirus health crisis, did not do it.

The Mané Garrincha stadium in Brasilia, without an audience due to the pandemic. Reuters

Acceptance by Brazil, a country with more than 17.4 million confirmed cases and 487,000 deaths associated with covid-19, It was criticized by different political sectors and society.

Bolsonaro, who led the tournament and had announced his presence in the capital stadium, informed the South American Football Confederation (Conmebol) about his absence this Sunday at the opening of the tournament, without giving details of the reasons.

The president of the Brazilian Football Confederation (CBF), Rogerio Caboblo, the highest authority on crowd sport in the country, was not present either because he was temporarily removed from office due to a complaint of sexual harassment by one of his secretaries.