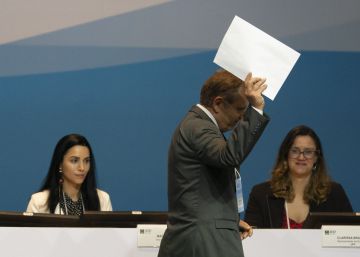 What was to be the largest oil auction in the world has finally left Brazil with a bittersweet taste and foreign investors, disappointed. Although the Government of Jair Bolsonaro has managed to raise this Wednesday 70,000 million reais (15,500 million euros) that the battered public accounts they will be grateful, it has fallen far short of the 25,000 million to which it aspired and, in addition, foreign capital has turned its back on the process. The state-owned Petrobras the exploitation of two of the four blocks offered by the so-called pre-salt has been awarded, immense and very rich reserves of oil and gas discovered in 2006 in deep water, under a thick underwater layer of salt along 800 kilometers of the southeast coast from Brazil. Two of the bids have been deserted and, despite the fact that up to 14 companies – including giants in the sector – had registered to participate, those of Petrobras have finally been the only proposals submitted. Only in one of the cases, the Brazilian firm presented itself with two Chinese companies –Cnodc and Cnooc— They have a minority stake.

The auction, held in Rio de Janeiro, has been brief: the company that shared a greater percentage of the profits with the Brazilian State won. The bid stood out for its magnitude and also because the areas included in the offer had already been explored by Petrobras. "It is known that there is enough oil, that you can earn enough money, and therefore there is not so much risk," explained Mauricio Canedo, an economist specializing in energy and professor at the Getulio Vargas Foundation. But that has not been enough to convince oil companies such as the British BP, the French Total, the Americans Chevron and ExxonMobil, the Malaysian Petronas or the Anglo-Dutch Shell, which like virtually all registered foreign oil companies did not even submit bids.

The oil of the Brazilian subsoil is – by legal imperative – owned by the State. In 2010 the authorities of the South American country gave Petrobras the right to produce 5,000 million barrels in the pre-salt areas and years later the technicians discovered that the treasure was even greater: at the bottom of the Atlantic, off the coast of the South American giant, there was double or triple crude. That extra is the one that was auctioned on Wednesday in which it had been considered by Brasilia as the biggest process of this kind ever. 24 hours later, this Thursday, another tender will be held focused on areas with greater risk: they have not yet been explored and, consequently, prices will be lower. In this second section, in which the Bolsonaro Government expects to obtain 1,750 million euros, the Spanish Repsol will participate in a consortium with the Chinese Sinopec.

Analysts highlighted the almost total absence of foreign offers in the auction on Wednesday. “He left a lot to be desired due to the lack of foreign demand for the disputed fields. It is no coincidence that the dollar today rises sharply (compared to the real, almost 2% when the result was known), since the perspective of foreign exchange inflows on this particular occasion has been frustrated, ”explains André Perfeito, of Nector Inversiones , in a note.

The result is a jug of cold water for the Executive of President Bolsonaro, who since his inauguration – in January – takes to have launched a liberalizing agenda and that on his trips abroad he reiterates the message that under his baton, Brazil is more than open to do business. But trust has not just taken off despite the recent approval of the crucial pension reform which plans to save 175,000 million in a decade.

The auction, however, will mean a strong influx of money for the State because Petrobras and the two Chinese firms will deliver more than 23% of what they extract (the legal minimum) in the Búzios block, the most important, and 18 , 5% of Itapú. The technicians estimate that the reserves in Búzios can be around 13,000 million barrels, the equivalent of the proven reserves in Brazil. ANDThe money will be distributed between the federal government, the states and the municipalities that, by law, should allocate it to investments “so that future generations can also enjoy the benefits of a resource that is finite,” closes Canedo.