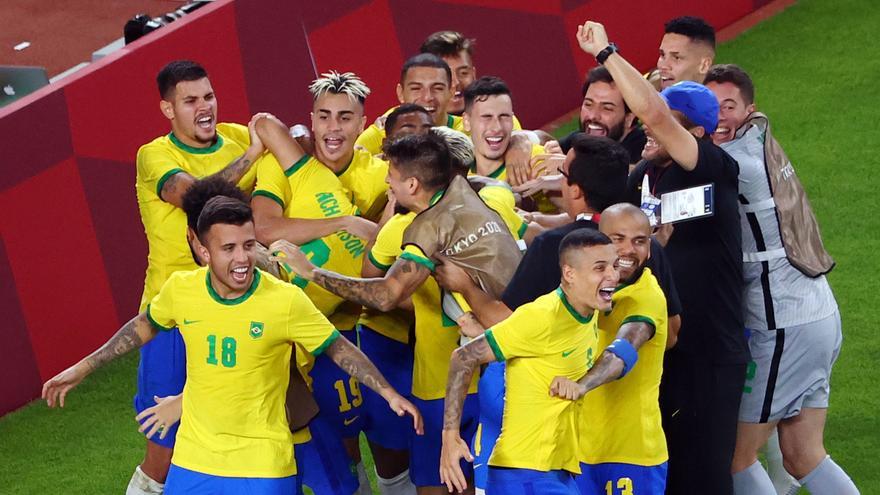 Brazil is already waiting in the final of the Olympic Games to the winner of Japan-Spain to defend the gold medal who won in his country, in 2016, after penalties in which luck smiled on them, since Guillermo ‘Memo’ Ochoa hit the side in all four shots, but he was millimeters from stopping them.

In the reissue of the London 2012 final, in which the Aztec team won, the ‘canarinha’ came out sending the game, settling in the rival field, but lacked clarity to put his rival in trouble. First a centered shot from Antony in the 19th minute and four later a strong free-kick from Dani alves were the only occasions in a first half that, however, could change in the m.27.

Douglas Luiz invented a penalty from the Bulgarian Georgi Kabakov. The former Girona midfielder got ahead of Vasquez’s career and he couldn’t help it. They called the referee from the VOR room and, after checking it on the screen, decided to override its initial decision.

A scare for Mexico who stayed there and to whom he knew how to react, having the best chances of the first half. First Cesar Montes with a header from a set piece and in minute 42 Luis Romo, one of the sensations of the tournament, coming from behind, warned Brazil.

But he fought, as in the last minute of the first half, in which Uriel Antuna defined with his right hand with goalkeeper Santos already overcome, but Diego Carlos, Sevilla center-back, appeared to take it out with his chest.

Of course, it served as a warning for Brazil, which saw how the backlash could suffer a lot and reduced the risks. Nothing remarkable happened in the first 35 minutes after the restart, until the ‘canarinha’ brushed the pass.

Minute 81 and Richarlison hit the stick with a header, with the ball walking through the small area. The Everton footballer himself picked it up and put a death pass, but no teammate came to finish it off. Brazil also had the last one in a Reinier center in 92, but once again they missed a pure striker and the game fulfilled the predictions in the second half by going into extra time.

Tiredness took its toll and creating an occasion became a world. A center from Malcom in the 93rd minute that Montes cleared with Richarlison ready to finish off was the only approach of danger in the half hour of overtime. Everything to decide on penalties.

Before starting, there were faces of tranquility and laughter in Mexico, while in Brazil only the eternal Dani Alves was out of the seriousness of his own. But after penalties, everything changed.

Brazil started the shoot-out and scored, which, according to studies, gives them a 60 percent chance of winning. And it was fulfilled, but by the hair. ‘Memo’ Ochoa hit the side in all four shots and brushed two of them, but only a few millimeters separated him from the glory. In addition, Eduardo Aguirre and Johan Vásquez failed the first two, leaving Mexico on the ropes.

24 black hours for the ‘tri’, who lost the final of the Gold Cup against the United States in the 117th minute and now the penalties leave it out of an Olympic final. Brazil, which was crowned in the Maracana against Germany, was smiled again by the penalty shootout, like five years ago.

Incidents: First semi-final match of the Tokyo Olympic Games played at the Ibaraki Kashima Stadium. No public due to restrictions due to the coronavirus pandemic.