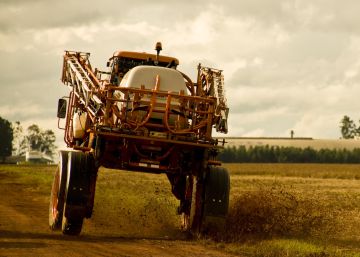 The Brazilian Government, led by Jair Bolsonaro, has accelerated the approval of pesticides with 262 new authorized products since taking office in January. It supposes “a rhythm never seen”, explains the author of Atlas of pesticide use in Brazil and its connections with the European Union, Larissa Bombardi, on a trend that began with the previous president, Michel Temer. The most serious, details this specialist from the University of São Paulo, is that "approximately one third includes some substance prohibited by the EU."

Brazil, an agricultural power, is one of the countries that uses the most pesticides. The expert explains that the increase responds to the fact that the cultivated area has increased and that more pesticide is used per hectare. But he points out that, in addition, control over the effects on agriculture is deficient and non-existent at the end of the chain, when it reaches the consumer. The most prominent ingredients among those used in Brazil and banned in the European Union are acetate and atracine, banned in the EU for more than 15 years.

With an agricultural sector that relies on monoculture for export, pesticides are essential. The Brazilian authorities approved, in the decade before 2015, an average of 136 new pesticides per year. Figures that have skyrocketed with the new president, who since the election campaign made it clear that he considers the environment a hindrance to economic development and that placed a leader of the agricultural parliamentary bench at the head of the Ministry of Agriculture and wants to open the Amazon to mining.

Another novelty that has brought the new Government in environmental matters is that, for the first time, Brazil has participated in a conference of climate deniers, as the newspaper revealed yesterday Folha de São Paulo. The newspaper has obtained a telegram from the Embassy in Washington in which a diplomat recounts his attendance at the forum, organized by The Heartland Institute on July 25.

The Bolsonaro Executive has also just adopted a new classification of pesticide toxicity, the harmonized global system for classifying hazardous chemicals. The Government defends it as an improvement because it means assuming an international standard. However, Greenpeace, like other critics of the measure, argues that the new system has weaker aspects than the one in Brazil. This is what Marina Lacorte, coordinator of the Greenpeace food and agriculture campaign in Brazil, believes. For example, this new model will only classify a product as extremely toxic if it poses a risk of death.

Lacorte explains that Greenpeace, other organizations and civil society have been working for years in the Brazilian Congress to prevent a bill that would facilitate the approval of pesticides. But he adds that, with Tereza Cristina Dias as Minister of Agriculture, "they don't even need a new law to wreak havoc anymore." The NGO maintains that the current incentives to pesticides should be derived to the promotion of more diverse and sustainable crops because it considers that the current system "is economically, socially and environmentally unsustainable."

The Brazilian forest code is considered by environmentalists one of the great legislative conquests. This norm establishes that each rural property must maintain the native vegetation in 80% of the plot if it is in the Amazon, 35% in the Cerrado and 20% in the rest of the regions. This rule contributed to combating deforestation, to successive governments to declare protected areas and to raise awareness among Brazilians about the environment, explains Marcio Astrini, also of Greenpeace. And so "deforesting became a bad thing," he adds.

But now the president questions the official data on the destruction of tropical forests and the Minister of Agriculture insists on distinguishing legal deforestation from illegal ones, in addition to stressing that agricultural owners must be compensated. “I don't believe in sustainability and environmental preservation with misery. Where you have misery you will not preserve. We have to be more open and see that the preserver has to have some benefit, ”Dias said in an interview. The minister framed the environmental criticisms of the European leaders to her Government in a concern for the matter but also in the fear of those countries to the competition of the Brazilian meat sector when the free trade agreement between Mercosur and the EU enters into force. This treaty has yet to be ratified by all the countries involved.

Why is All Saints Day celebrated?