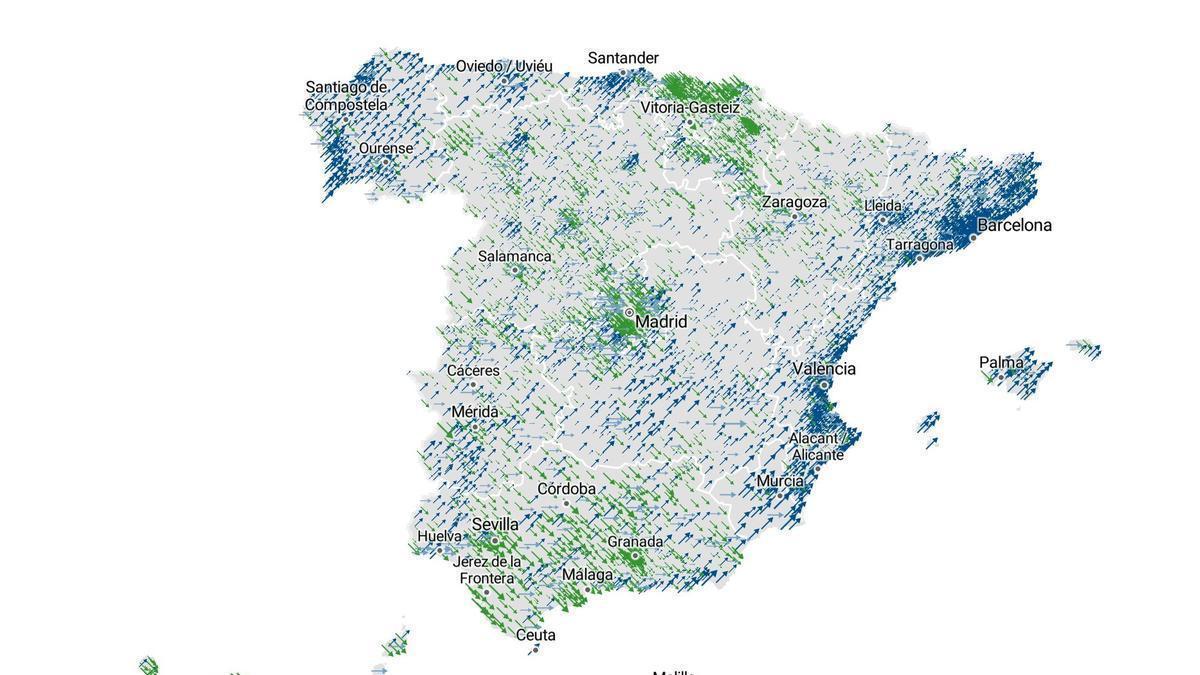 * Information updated with the latest data available as of January 26.

The sixth wave curve has stopped rising. During the last week, fewer cases have been reported than in the previous one, although more than 14 days ago, in the last blows of the holidays. However, this stagnation is uneven in the different communities. On the one hand, 31% of the population lives in municipalities where the incidence is falling – especially in Andalusia, Madrid, Euskadi, Navarra and La Rioja – and another 8%, in localities that detect almost the same infections as two weeks ago. . Despite these first green shoots, the majority of the population resides in towns and cities where cases continue to rise.

Large cities of Malaga, Seville and Cádiz, in Andalusia, and also Madrid lead the list of municipalities with more than 40,000 inhabitants that have reduced their infections the most in 14 days. Alhaurín de la Torre (-49%), Mairena del Aljarafe, Sanlúcar de Barrameda and San Fernando have reduced their cases by more than 40% in the last two weeks. At the opposite extreme, large Catalan cities such as Sant Cugat del Vallès, Rubí and Terrassa exceed 7,000 cases detected in 14 days per 100,000 inhabitants.

Unlike previous waves of vaccination, the fatality rate of COVID-19 has remained lower. Even so, the communities are already reporting an increase in mortality that, although it remains far from the figures reached in the worst moments of the pandemic, has already reached worse figures than in the summer wave. These are some of the results extracted from the analysis carried out by elDiario.es based on data from the Departments of Health of the 19 autonomous communities and cities. You can read more details in the methodology.

At a global level, confirmed cases of COVID-19 are rising 📈 in 3,689 localities (in 3,327 of them very quickly 📈 📈 ) where 61% of the Spanish population lives, they are falling 📉 in 1,413 municipalities where 31% of the population and are in a plateau phase (they remain more or less the same as two weeks ago) in 400, where 8% live. The rest are very small municipalities where very few cases are registered –less than 5 every two weeks– or for which no information is available –which represent less than 1% of the Spanish population–.

The map that opens this information shows the data of total confirmed cases of COVID-19, in 14 days and the trend of infections in each municipality of the autonomous communities that have published their infection data in each locality: practically the entire territory to except for the smaller municipalities of Catalonia and Galicia, which do not break down the figures of the municipalities with fewer inhabitants.

The data for each municipality used for this article shows the same variable: the number of people who have tested positive for coronavirus and for whom their place of residence has been identified. Most communities include the data on positives by PCR test, antigen test and some also add cases confirmed by rapid antibody tests. This medium, which has been collecting data by municipality since the end of March 2020, calculates the trend in each municipality by comparing the number of confirmed cases in the last two weeks with the infections detected in the previous two weeks.

It must be taken into account that the data of the communities are not always homogeneous among themselves due to the type of tests they include, the dates on which their figures are updated or due to changes in the publication of the data in the same month. The update date of each community depends on each one of them: most keep their figures updated weekly but some are late when updating their figures.

In the 17 autonomies analyzed, Madrid is the city with the most infected detected in a single municipality. However, the municipalities with the highest incidence rate (cases in 14 days per 100,000 inhabitants) are small towns in which an outbreak can affect a larger proportion of the population.

Some municipalities do not appear as there are no data available and some communities do not publish the total number of confirmed cases since the start of the epidemic. It must be borne in mind that the number of cases is closely related to the ability of health authorities to detect them. That is, the more tests or analyzes carried out, the more cases detected. How many confirmed cases are there in each municipality and what is the current incidence in your locality? Check it out in the following table.

The Balearic Islands initially refused to share their data, although in the end they have published them. Extremadura, under the same criteria, initially only published 8 more populated municipalities in the region. Now it publishes the figures even by local entities, villages and districts. La Rioja does not now publish those of the towns with fewer residents. They are not the only cases, practically half of the regions refused to publish their figures arguing that they wanted to avoid the stigmatization of specific municipalities. Today, they all publish their COVID-19 case data by municipality.

These data are essential for combating a pandemic: they make it possible to detect sources of infection and act accordingly, provide more information to local administrations and regional governments of neighboring communities, and facilitate analysis of the impact of the epidemic.

This analysis makes it possible to verify in which areas there is a higher incidence rate based on variables such as average income, percentage of the population over 65 years of age or population density. Precisely, hundreds of statistics broken down by municipality are published from all administrations: population by age, country of birth, nationality, average income, registered unemployment data, educational level or mortality rates.