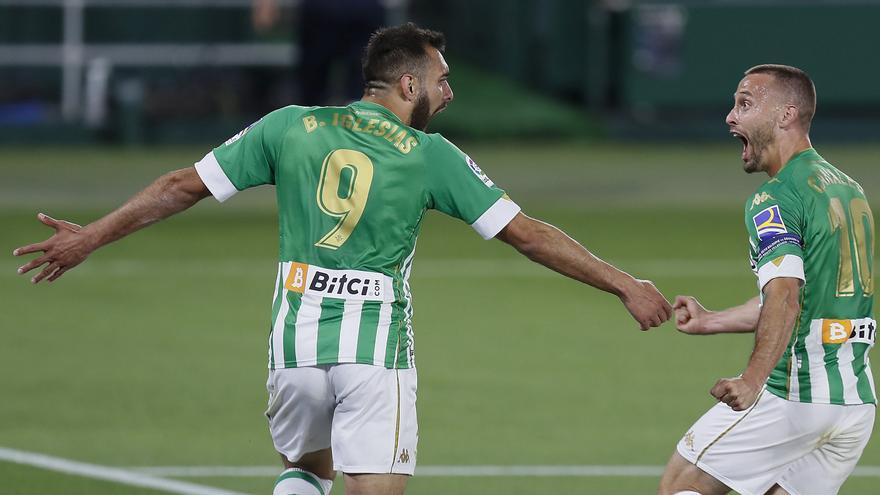 The Betis won by 2-1 to the grenade with a double from Borja Iglesias and, after breaking a streak of six draws in a row, they are very close to achieving the goal of returning to European competitions, while practically leaving that fight a physically worn team from Granada and who lacked more ambition at Villamarín.

The Betis went ahead at 39 minutes with a good goal from Borja Iglesias on one of the few occasions for his team in the first half and then Granada dominated more in the second to tie through the Venezuelan Darwin Machís in the 66th minute, but Betis reacted in the end and achieved victory when the Galician converted his ninth goal in the League into an indirect free kick inside the area after a loan from Gonalons to goalkeeper Aarón.

In an Andalusian duel with Europe at stake, the Betic coach, Manuel Pellegrini, opted for the central Marc Bartra instead of the Algerian Aïssa Mandi, sanctioned, by the Portuguese media William Carvalho together with the Argentine Guido Rodríguez to the detriment of the Mexican Andrés Guarded and by Joaquín Sánchez, who became the Betic player with the most matches (461) beating the goalkeeper José Ramón Esnaola , by the Frenchman Nabil Fekir, also sanctioned.

With losses at the top such as those of the Brazilian Robert Kenedy, due to injury, or Roberto Soldado, due to suspension, and that increased very soon when Montoro was injured at 12 minutes, replaced by Fede Vico, Diego Martínez only changed his eleven with the Portuguese central Domingos Duarte and the Colombian forward Luis Suárez for the Argentine Nehuén and Jorge Molina.

The clash started with a lot of equality and little rhythm, with high pressure from Granada, better placed and perhaps with more ideas to do damage than a Betis without clarity in attack, except in some attempt by the bands of Aitor Ruibal on the left or the Brazilian Emerson on the right hand, and who suffered when he lost the ball and his rival gave speed to his approaches to the area.

The spigot, however, was opened by the Verdiblancos with a muddled play in which William looked for the door, although the Granada’s rear aborted the danger. The reply was not long in coming, when a bad clearance by Bartra was cleared by Claudio Bravo and the ball fell to Fede Vico, who was perfectly covered by the Chilean goal. The game continued without a clear dominator, with Granada looking for its opportunity and Betis most lostAlthough this did not stop him from appearing in attack, although very intermittently, thanks to the vision of Sergio Canales against a solid team from Granada and who had the best option to open the scoring.

Luis Javier Suárez had it on the edge of the equator in the first half, but in the 21st he crashed his shot into the left post from Bravo’s frame and the rejection was clinched to a goal by the Venezuelan Darwis Machís, although the goal did not rise to the scoreboard when it was canceled out of play after consultation with the VAR It was a warning for Betis, who, from there, raised his level and, after a cross by Aitor Ruibal that Aarón cleared and a dangerous back pass that Foulquier rejected, very timely, he achieved 1-0 with a good goal from Borja Iglesias 6 minutes before the break, as he fumbled in the area after a active duty Ruibal and score with a tight shot.

Granada noticed the blow, as Pellegrini’s team calmed down, gained security and took the initiative, although in the resumption Diego Martínez’s pupils came out with more vigor against a conservative Betis, unable to go out in attack and without control of the game, that Granada took advantage of to try to create problems for him. In the first quarter of an hour, two shots by Antonio Puertas, one with a header from a foul that Bravo cleared and another with his foot that went wide, after a pass from Vico, were the prelude to the 1-1, achieved by Darwin Machís at 66 minutes after a serious error by Bartra in a back transfer after Suárez headed a long ball.

The Venezuelan arrived before Bravo, trimmed it to perfection and was unforgiving, after which the Chilean coach gave entry to Cristian Tello and Mexican Diego Lainez, by Ruibal and Joaquín, looking for the reaction of a very muted and thick Betis, while Martínez also refreshed his team by jumping to the field Víctor Díaz, Nehuén and the exbetic Jorge Molina, instead of Domingos, Machís and Vico. This blow spurred Betis. Although Granada had another good option in a Machís center that Víctor Ruiz saved, by preventing Suárez’s shot, the green-and-white box went up, attacked everything it had not done until then in the second half and sought victory with shots from Borja Iglesias, Rodri or the Argentine Guido Rodríguez.

However, the winning goal of the team from the Heliópolis neighborhood did not come until three minutes before reaching the regulatory 90When Guido finished off a corner, Aarón cleared and Gonalons then touched the ball towards his goalkeeper, which was marked as an indirect free kick in the same line of the small area by voluntary assignment to the goal. The foul, in the front of the small area and with all the Granada tucked under his goal, was taken by Canales for Borjas Iglesias, whose first shot was rejected by Puertas, although the Galician forward himself picked up the ball and then he did manage to beat Aarón to score his second goal of the clash and give Betis three valuable points.