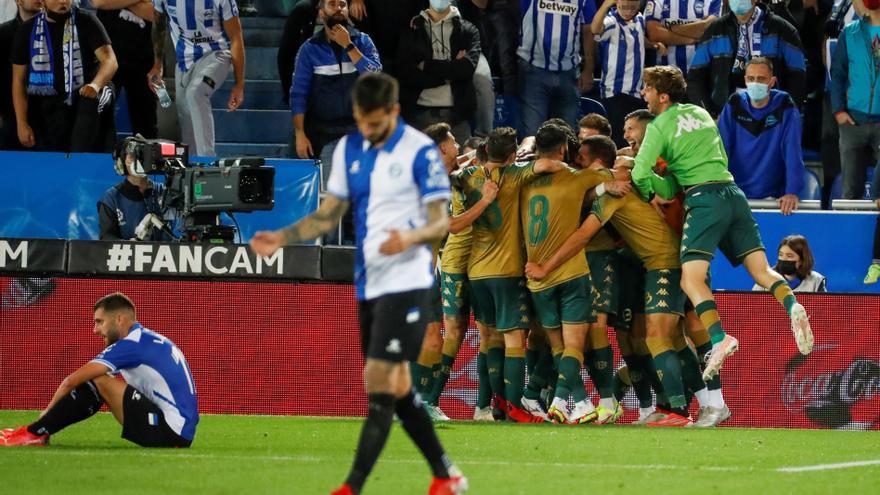 Borja Iglesias placeholder image rescued this Monday the Real Betis in Vitoria with a goal in the last gasp of the duel against him Deportivo Alavés that gave the three points to the Andalusian team that beat the Basques 0-1 in the final stretch of the match corresponding to the ninth day of LaLiga Santander.

The goal in the 89th minute tipped the balance in favor of the Betis, who were misguided for much of the game against a Basque team that crashed the ball off the crossbar on up to two occasions and that leaves Vitoria in the lower zone of the classification, while the Verdiblancos rise to eighth position.

After the first bars in which the duel began with a lot of rhythm, Joselu Mato gave the first warning from set pieces. From the beginning it was Real Betis who tried to set the pace of the match and take the lead by circulating the ball with a very direct game that planted them in the area with speed.

The ball barely lasted on the feet of the Albiazules, who could not overcome the high defense of the Andalusians, who suffered from the set pieces. In fact, the best chance thus far was in the 16th minute through a corner kick taken by Toni Moya that hit the crossbar and was close to scoring an Olympic goal.

Neither of the two squads matured their attacks much and the ball always haunted the domains of both archers, although Fernando Pacheco had more work than Rui Silva. Alavés was torn between the lines and Betis took advantage of them to dominate.

In the 25th, the local goalkeeper saved from the Verdiblancos’ first goal by repelling a powerful shot from Nabil Fekir in a great display of reflexes.

Alavés woke up as a result of their defensive pressure and put fear in the body behind Betica, which reacted in the last meters to avoid the chances of a Basque squad more comfortable playing backlash.

Another good chance was the Uruguayan Facundo Pellistri in 38, he picked up a rebound in the front of the small area with everything in his favor, but failed to direct the shot between the three sticks, in the best moments of the Vitoria, who finished better in the first half.

The end of the first 45 minutes gave confidence to the slime foxes who jumped with more vigor in the second half, but this allowed Betis to be planted in the area quickly, although they found a successful defense.

The crossbar was once again the protagonist and again prevented both from Alava. A header from Miguel De la Fuente’s back to goal in 59, next to the goal, he hit the crossbar when Rui Silva was already outmatched.

The duel did not lose power since it began and between the crossbar and the errors in the auctions of the Betics prevented the marker from moving.

After a series of rejections in the local area, Joaquín Sánchez managed to advance to the bottom line and before the desperate exit of the Albiazul goal, he left the ball behind for Borja Iglesias to push in the 89th minute when everything pointed to a final draw.

He both fell like a jug of cold water in Alavés and his fans and confirmed the success of Manuel Pellegrini when moving the bench.

Incidents: match corresponding to the ninth day of LaLiga Santander played at the Mendizorroza stadium in Vitoria before 10,227 spectators. The local team jumped onto the pitch with a pink shirt in support of the fight against him breast cancer.