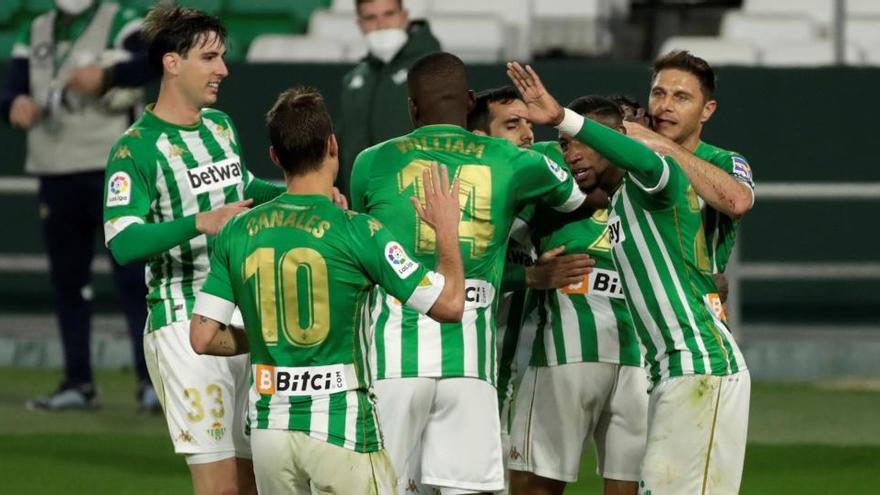 Borja Iglesias gave victory to Betis by transforming a penalty in the final stretch of a match that became very difficult for him and that he was able to get back on track before with another launch from eleven meters executed by Sergio Canales and that stopped the goalkeeper of the Getafe David Soria, who could not get despite his great performance that his team take at least one point from Benito Villamarín (1-0).

The green and white set, with this new victory, sleeps in European positions, while Getafe continues on its bad streak and accumulates six games without winning and 539 minutes without scoring, which is very close to the relegation places.

The Madrid team did not arrive at its best moment at the Verdiblanco stadium, with its coach, José Bordalás, unable to be on the bench due to being sanctioned and with 24 points, three from relegation, after a streak of five consecutive games without scoring and being the least achiever in the category. The Alicante coach, to reverse the situation, arranged a block full of heavyweights on the field, among which was the Cameroonian Allan Nyom, the Uruguayan Mauro Arrambarri, Marc Cucurella, Ángel Rodríguez or the Togolese Djené Dakonam, who returned to eleven after two games of suspension after the stomp he gave to the Argentine from Sevilla Lucas Ocampos.

The two winter boosters, the Japanese winger Take Kubo and the Catalan midfielder Carlos Aleñá, stayed on the bench waiting for his opportunity in a team that, as he entered, was expected to be more physical.

Before them, a Betis in a very different situation after their coach, the Chilean Manuel Pellegrini, found the line of play at the beginning of 2021 and got into the heat of the fight for the positions that give the right to play a continental tournament .

The coach of the Sevillian formation, except for the forced absences due to injury, like that of central Victor Ruiz, he wanted to give continuity to the team that has given him good results in recent days and that on the previous day won at Villarreal (1-2), with which two recovered, the center forward Borja Iglesias and the Mexican playmaker Diego Lainez, started as a substitute.

Betis did not take long to show their intentions and in an error by the Uruguayan Erick Cabaco could well cost Getafe a goal, but Loren Morón, after leaving goal David Soria, did not find the sufficient angle to introduce the ball into the rival goal. The local team soon found themselves with an unexpected problem, when one of their fundamental men, the French international midfielder Nabil Fekir, suffered a sore right thigh and after thirteen minutes he had to leave the place for Cristian Tello.

That circumstance did not seem to deconcentrate Betis, which maintained the initiative and control of the ball against a somewhat imprecise Getafe in defense and whom It was difficult for him to get close to the goal defended by Joel Robles but that, despite this, he managed to make the minutes pass without the rival putting him in great trouble and go to rest with the 0-0.

As in the first part, the locals had in the second very early the possibility of opening the scoringBut the connection between Sergio Canales and Tello was not completed by Loren, who narrowly missed a ball when ex-Sevilla player David Soria was already beaten. Canales had another to which Soria responded in a match in which Getafe now pressed much more forward and in which in Betis they had the possibility of finding spaces to replicate and more with the entry into the field of Borja Iglesias and Joaquín Sánchez.

The Uruguayan Mauro Arrambarri enjoyed the best so far for Getafe at 72 minutes, but the ball was crossed, and shortly after Betis squandered a penalty from Moroccan Sofian Chakla to Borja Iglesias. The maximum penalty was launched by Canales and was stopped by David Soria, who in the 83rd minute saw Sofian Chakla once again give Borja Iglesias another penalty and this time the Galician striker was the one who shot and scored, thus adding his fourth goal in The league and his sixth of the season with the two he achieved in the Cup.

Incidents: Match of the twenty-fourth day of LaLiga Santander played at the Benito Villamarín stadium. No public due to health protocols for the coronavirus pandemic. Before the match, a minute’s silence was observed due to the recent death of Enrique Pérez Pachín, a Betis player in the 1968-69 season.