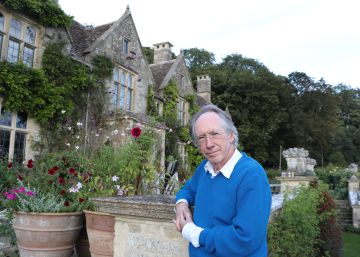 Question. Artificial Intelligence (AI) as the great challenge facing humanity. Why did you choose something like that?

Answer. It is something that comes to me from afar. In the 70s I wrote a script for the BBC about a character from Bletchley Park, the military installation where German codes were cracked during World War II, which had a certain relationship with Alan Turing. That was when I was interested in AI, and for many years I followed the investigations. In the 80s and 90s there was a break. The animal mind, the human mind, is much more complex than anyone ever imagined. The last few years have been a kind of golden age, with spectacular advances, especially in the writing of software.

P. He not only introduces androids of perfect intelligence, but he does so in the United Kingdom of the 1980s, and resurrects scientist Alan Turing as a character in his book.

R. Turing was the beginning of my interest in this matter. In the thirties, before he broke the Enigma code of the German army, he already laid the fundamental foundations of what a computer could do. It is one of the heroic figures of the digital revolution. And above all, he was persecuted and prosecuted for being gay. He committed suicide to avoid prison or chemical castration. I felt that I should return the life he never had and make him a prominent genius of the digital age. We will never know everything that could have come to be.

P. Is the reality in your book so close?

R. No, everything is still in a very childish state. Think of the Pacific Ocean: it is as if we had barely put a toe in the water. But it is expanding, and the horizons are immense. It is already interesting in itself that we see this whole issue as a threat or as a promise. It is probably both. We are on the threshold of a change of civilization, about to create intelligences superior to ours. Something more important than the invention of writing or the industrial revolution. But if we reach a stage in which AI designs its next generation by itself, it could escape our hands.

P. And the big question is knowing if those intelligent creations can acquire a consciousness.

R. In the novel I raise a moral dilemma: if Miranda, one of the protagonists, should or should not go to jail for what she did in the past. You can program or design a series of algorithms for an artificial being that impose the order not to lie or to respect the prevalence of the law, the rule of law. But humans have that ability to lie on some occasions, when we know it is a good thing. Like when you tell a friend with a terminal illness 'today you look better'. Writing the algorithms that develop that quality is very complicated, it requires empathy. That is why in the book I wonder what would happen if those artificial beings were able to develop emotional intelligence, if they were able to fall in love or experience sexual desire. Turing's thesis stated that, if you are unable to determine whether or not a machine has a conscience, you must assume that it has it.

P. The android of his novel, Adam, reproaches the human, Charlie, that he is so afraid or envious, and that he underestimates himself.

R. And we shouldn't be afraid of what's coming. In addition, we have proven to be useless when predicting the future. We never glimpse the arrival of the internet. And when the internet already existed, we never anticipated social networks. And when social networks arrived, we never imagined that the Russians would be able to elect the president of the United States. It may happen that we are finally the robots ourselves, and that we end up interfering in our own brains, either through microchips, drugs or through techniques that we cannot even imagine right now. Maybe in a hundred years the idea of ​​a perfect android called Adam is something picturesque.

P. Margaret Thatcher loses the Falklands War and national humiliation brings Tony Benn, a radical Labor worshiped by youth, to power. Are you inspired by the reality of your country?

R. Not for this book, but I'm still very aware of everything that has to do with Brexit. It fills me with despair, although I simply can't look the other way. I think we have all gone crazy.

R. The Conservative Party, especially. This has been his private civil war for many years. And it has ended up moving us all. Driven now, in addition, by the extreme right and English nationalism. A nationalism that was always there, and now has seen the opportunity to regroup around Brexit, as if it were a magnet.

P. And find any explanation for all this?

R. In recent years I have come to read 500 million words on this issue, I have had hundreds of hours of discussion and debate, and I have read and read the right and left press, which is in favor of Brexit and which Defend the EU. And I still haven't heard a single argument in favor of the United Kingdom's exit from the European Union that convinces me and that it has rational solidity. They say they are concerned about the loss of sovereignty, but each international treaty involves a cession of sovereignty, including membership in NATO.

P. And suddenly, Boris Johnson is the prime minister.

R. It amazes me, because he is an educated and intelligent man, with a lot of personal charm. And it has become a populist tarugo of the worst kind. I compare him with a character from Summer night Dream from Shakespeare. I think that at some point the magic dusts will fall on your eyes and the donkey's head will disappear. And again it will be Boris Johnson. Despite being a cultivated man, and as such with a sense of what History is, he has shown a deep ignorance about the functioning of parliamentary democracy. And in that sense it has been a big disappointment.