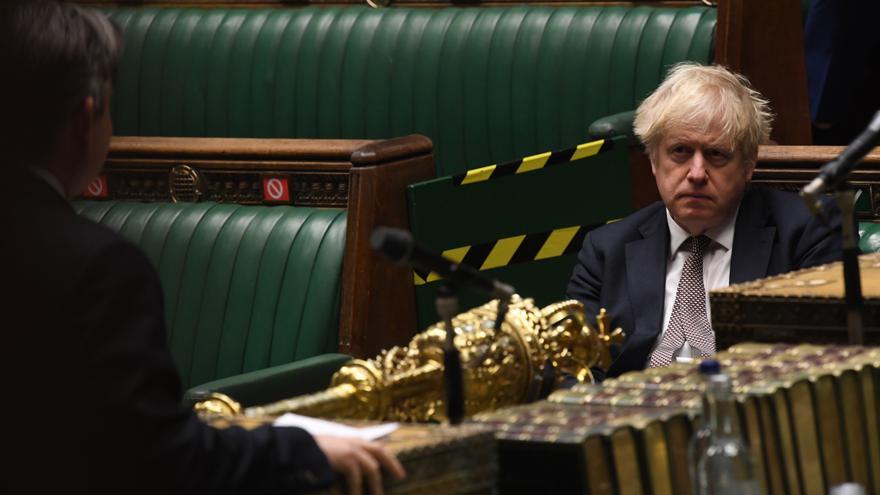 Hundreds of thousands of British citizens are going to have a “very, very difficult” winter ahead due to rising household costs, especially from rising electricity and gas. In addition, companies have warned the prime minister’s office, Boris johnson, that a sharp rise in energy prices could lead to a three-day working week in factories and even greater stockouts on supermarket shelves.

High-level members of the Conservative Party, among others, have urged the prime minister’s office to become aware of the threat of food shortages and economic hardship in households caused by the increase in energy tariffs, to which They add the cut in the social benefit known as universal credit (public aid to workers who do not make ends meet) and the increase in National Insurance (equivalent to Social Security in Spain) during the next year.

Damian Green, former Cabinet Minister of Theresa May, has warned of “very, very difficult times for hundreds of thousands of people in this country”, while Robert Halfon, a member of the Conservative Party and former Minister of Commerce, has asked the Government to consider eliminating or reducing the VAT of 5% in electricity and gas rates.

The Labor Party points out that many households will be hit by the “triple whammy” of rising energy prices, the increase in National Insurance and the cut in universal credit. Labor will also seek to discuss government plans to cut universal credit during one of the “opposition days” in the House of Commons, causing more than 6 million families to lose more than £ 1,000. annual sterling.

Electricity and gas rates will increase an average of £ 139 in October, although the price cap will prevent increases throughout the winter. The jump in gas prices worldwide – which has already caused the collapse of several supplier companies and has been a threat to so many others – means that there is a risk that there will be more increases in the price revision next spring.

From the prime minister’s office they insist that the United Kingdom is “resistant”. Kwasi Kwarteng, the company secretary of state, says that “there is absolutely no possibility of power outages nor about people not being able to turn on their heaters in their homes. “The minister has also dismissed” three-day workweeks or a throwback to the 1970s, “saying such ideas were” alarmist, counterproductive, and completely wrong. ” .

However, the British Chamber of Commerce has said that factories were already discussing a “more permanent reduction in their operating capacity”: for example, a three or four day working week or an hourly reduction, due to the high price of gas and the consequent shortage of CO2.

Energy-intensive industries are known to be considering such measures, as are fresh food and meat packaging distributors, which are dependent on market prices for CO2.

In a joint statement released Monday night, Kwarteng and the UK Office for Gas and Electricity Markets (Ofgem) stress that the crisis “is not due to shortages” and that the UK has a capacity “that can more than meet demand.”

On Monday morning, a round table was held with energy companies and consumer groups, which will be followed by another, made up of smaller companies, over the next few days. “Our clear and consensual position is that a cap on energy prices be maintained,” the statement said.

Ranjiit Singh Boparan, owner of Bernard Matthews, the poultry producer, and 2 Sisters Food Group, has warned that a shortage of workforce, coupled with CO2 shortages, could lead to the “cancellation” of Christmas.

Suren Thiru, Director of Economics at the British Chamber of Commerce, says the energy price crisis “may exacerbate the difficult supply chain situation” which affects several sectors. Companies are already grappling with transportation and staff shortages linked to Brexit and COVID-19, coupled with global supply chain disruption linked to the pandemic. Meanwhile, experts warn that rising energy prices are likely to lead an inflationary spiral.

Ed Davey, leader of the Liberal Democrats and former Secretary of Energy, points out that the prime minister and his government should not be dismissing the crisis as a “global problem or a slip” in supply.

Davey says the looming cost of living crisis “will hit the most vulnerable,” even though the government “has not invested in making houses warmer through thermal insulation. He [Johnson] it has failed to diversify the UK to cut its over-reliance on heating gas and its disastrous Brexit deal is already causing food price hikes. “

Green, the former secretary for Work and Pensions, estimates there will be around 500,000 particularly vulnerable people this winter. “Many of them are already working very hard to keep their families afloat. The £ 20 cut was already a hardship for them,” he says. “Now, we see that the prices of electricity and gas will increase and we already know that the growth of inflation is the fastest in a whole generation. There is the possibility that very, very difficult times are ahead for hundreds of thousands of people. “.

Ed Miliband highlights that he fears that the government is “resting on its laurels with regard to prices and the economic impact of the current situation.” The opposition trade secretary has asked Kwarteng to present his plans to support businesses, particularly energy-intensive industries, and to say whether the government has considered assisting struggling businesses with loans. .

Stephen Elliott, chief executive of the Chemical Industries Association, says the industry “was already paying a higher amount” for energy compared to the rest of Europe, at a time when the entire continent is struggling. to the increasing cost of reducing carbon emissions.

Kwarteng says it is considering options to assist the sector, as well as wanting to ensure that users of the collapsed power plants do not lose their money or their gas and electricity supply.

The government is considering granting state-supported loans to help the UK’s largest energy providers onboard millions of unprofitable customers ahead of the “tsunami” of providers going bankrupt this winter.

As an alternative, the government is also considering plans for a “bad bank” type company to recruit users who were left without service due to the power failure to ensure that they continue to receive power at the price they have agreed to pay.

Emma Pinchbeck, CEO of Energy UK, says that “there are no easy solutions, but the priority of everyone involved is to protect customers as much as possible … And while the immediate focus is on the current situation, this shows why we must continue the transition to a low-carbon economy and further reduce our dependence on fossil fuels to end the risk of being exposed to volatile international prices in the future. “

Five small supplier companies have gone under in recent weeks and another four are likely to go bankrupt before the end of the month. The number of collapses is expected to increase as cold weather drives up record fare prices.

A source close to the government has confirmed that the loans with state support could be granted to financially robust energy companies that can incorporate clients, rather than to small companies that find themselves in difficulties.

Ofgem on Monday designated British Gas as the new energy supplier for nearly 350,000 users who had been left without their power supply after People’s Energy will enter liquidation status In the past week.

Bulb Energy, which has 1.7 million customers, is looking for new investors to finance the company’s growth, but may struggle to find investors due to the high risk of market conditions this winter.