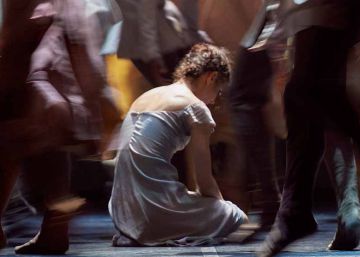 It has been 13 years since the English National Ballet (ENB), before London Festival Ballet, will go through the Real's stage in 2005 under the direction of Canadian Wayne Eagling with a mediocre Swan Lake devised by Derek Deane. ENB was later, in April 2014 at the Theaters del Canal with The corsair, already under the direction of Tamara Red (Montreal, 1974). Now with this Giselle which is preceded by its media impact and the British awards, the matter has complicated its own. At the premiere there were boos and shouts of protests from a sector of the public that were about to interrupt the function; The main reasons for the protest were the electroacoustic sound and its ruthless volume and poor lighting. Then, in the second act, already in the underworld, the thing traced something with the plot tragedy.

The ENB has always been a company through which "people pass", a kind of springboard for many good ballet artists. That makes its staff dynamically very changing, aspect that has both positive and negative (among the survivors of the 2005 visit is James Streeter). Now the ensemble has a good artistic level and meets this immersion in a dance style that is naturally alien to it. Red herself is intense and delivered to that trip, in a maturity of caliber, maintaining its tone and its strength. Streeter's Albrecht was gray and second, while the Hilarion of the American Jeffrey Cirio enjoyed intensity and vigor.

The comparison with the other European company that dances this same work, the Vlaanderen Ballet (Opera of Antwerp), where its director, Sidi Larbi Cherkaoui, a close friend of Akram Khan, bought him the choreography (there Giselle is Nancy Osbaldeston, who left ENB in ​​2013 and Hilarion the talented Spanish Daniel Domenech). It is as if that Belgian ensemble more immersed in contemporary modes had more blood internalized modes and accents. With them it looks differently.

The music is debatable; Englishmen They always put the nerve in the world of ballet in this “to improve”, like John Lanchbery amending the orchestration plan to Hertel or Hérold, or Richard Bonynge doing the same with Pugni or Drigo. It has all the logic of the world that Khan feels more comfortable with Lamagna than with Adam, but the result is craziness, literally wild and violent. At the beginning, some loops on the reason for the tubes (notice of the court and hunting) and of the coda of the pas de deux from the second act they give an idea that is later diluted to bad.

From the dressing room, say that it is incomprehensible. This is what happens when a successful Chinese designer is allowed to interpret a mantua, true Mannerist instrument of posisabelino luxury, so alien to its cultural universe of origin.

Only two sketches of formations bring the plastic from now on to the matrix: the diagonal of the Willis and that crossing of the artists from side to side of the scene, jumping their despair and perhaps their anger. The conception of the Willis in Khan has more to do with Furias de Da Ponte than with Heine's mournful spirits, let alone a story or inspiration in the book by Théophile Gautier. And so we come to other considerations and a certain pragmatism. It is intelligent by Red Demarcate from the inveterate competition with Royal Ballet, find your own way out, but something this time has failed. It is true that when Mats Ek came up with Ana Laguna in 1982, his Giselle Modern in Cullberg Ballet was not entirely accepted, but today it has become a canonical example of what to do with the repertoire without losing the north, even looking east or south.

The incredible polychrome of the idol of Pachacámac